With elections right around the corner, it has become much easier for the settlers to pressure Prime Minister Benjamin Netanyahu to do their bidding and let them rule downtown Hebron. 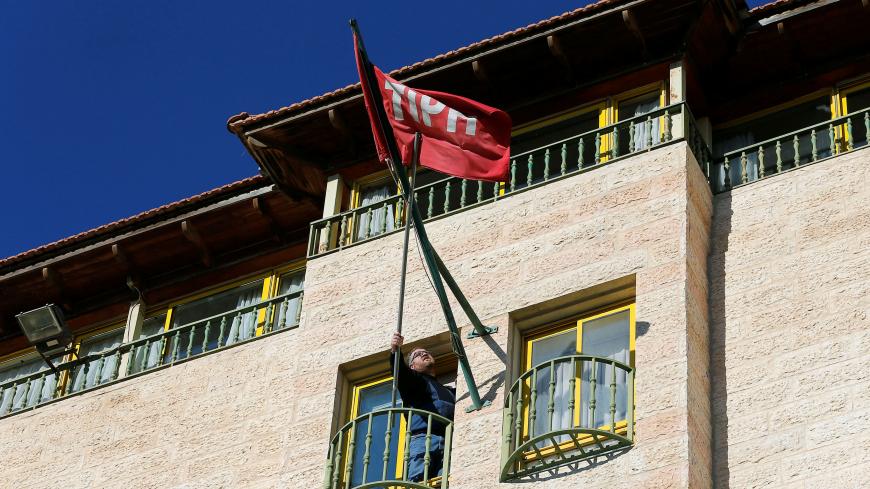 A staff member fixes the flag of the Temporary International Presence in Hebron at its headquarters in Hebron, the West Bank, Jan. 29, 2019. - REUTERS/Mussa Qawasma

Prime Minister Benjamin Netanyahu surprised everyone Jan. 29 by announcing that he had decided not to extend the mandate of the multinational observer force in Hebron. The force was established in the wake of Baruch Goldstein’s massacre of Muslim worshippers in the Cave of the Patriarchs in February 1994, and after the United Nations Security Council demanded that an international force be stationed in Hebron to monitor events in the most volatile city in the West Bank. The force was first stationed there in May 1994, but it was forced to leave that August, after Israel and the Palestinian Authority under Yasser Arafat could not reach an agreement on what troops would constitute the force and what its precise mandate would be. It returned to the city after the signing of the Hebron Accords in 1997 by then-Prime Minister Benjamin Netanyahu and Palestinian leader Arafat.

The Temporary International Presence in Hebron (TIPH) now consists of several dozen unarmed observers from Norway, Italy, Sweden, Switzerland and Turkey. They are tasked with documenting events on the ground and writing situation reports, but these have had no real impact on the town. In fact, most reports written by TIPH get very little attention.

On the other hand, quite a lot of information about what happens in Hebron is disseminated to the public. Video clips showing clashes between Palestinians and the settlers in Hebron are published frequently. Israeli human rights organizations such as B’Tselem and Breaking the Silence place activists in Hebron specifically so that they can report to the world about what is happening there. So, for instance, in 2016, they filmed a soldier, Elor Azaria, shooting a neutralized terrorist in the head. Ten years earlier, in 2006, dozens of settlers were filmed throwing rocks at Palestinian homes, in response to plans to evict Jewish families squatting in houses in the local wholesale market, as well as in the illegal outpost of Amona. Furthermore, Breaking the Silence organizes tours of the city for anyone who is interested. Recently, they also released “Occupying Hebron,” a collection of testimonies from soldiers, describing the impossible situation in the city. The bottom line is that with such extensive documentation already circulating, written reports by the multinational force do not contribute much to the discussion.

Over the years, the international observers tried hard not to upset the Israelis too much, so that they could continue to cooperate with the Israel Defense Forces (IDF) and the civil administration. As a result, reports produced by the various human rights organizations were usually much more severe than anything TIPH produced. But Hebron is still Hebron; it is impossible to ignore what is happening there.

In December 2018, journalist Uri Blau published in Haaretz a report by TIPH, claiming that Israel was violating international law and harming the Palestinian population on a regular basis. According to the report, no attempts are made by Israel anywhere in the city to restore "a normal life," particularly not in the Old City. As an example, the report mentions the old Palestinian vegetable market, which has been turned into an Israeli military zone "that is frequently taken over by settlers and serves as a playground for their children."

From the settlers’ point of view, this report was too much. True, it would be impossible for them to kick B’Tselem and Breaking the Silence out of Hebron. The most anyone can do is try to discredit them by calling them leftists and enemies of Israel. But when it comes to international observers from Europe, who are already suspected of anti-Israel sentiment, there is something that can be done.

As a result, the leaders of the settlers began pressuring Netanyahu (again) to act against TIPH. Similar pressure applied over the years, until recently, had little result, even though the settlers claimed that the international observers were being hostile to them. In 2017, for instance, Palestinian security cameras caught an observer puncturing the tires of a car belonging to a family of settlers in Hebron. At the time, the incident was considered to be so marginal and uncommon that nothing was done with the video footage. It only made the headlines in the last few months, as part of the settlers’ efforts to throw the undesirable organization out of Hebron once and for all.

Still, Netanyahu refused to acquiesce to the settlers’ requests, at least until this week. Then, without informing anyone in the security forces, the civil administration, the Foreign Ministry or even UN Middle East envoy East Nikolay Mladenov, Netanyahu announced that the observers’ role in Hebron was over. He did this even though he himself, together with Arafat, first decided to station them there 20 years ago.

The Israeli right celebrated of course. The Yesha Council, the umbrella organization of the settlement movement, released a statement priding itself on the success of the public struggle it waged, together with other right-wing organizations: “We are pleased to see that all the effort we poured into this, together with the Land of Israel lobby in the Knesset, the “My Israel” movement and the Jewish community of Hebron, finally bore fruit.”

The chairman of the Knesset Subcommittee for Judea and Samaria (in the West Bank), Knesset member Moti Yogev (HaBayit HaYehudi), is a resident of the settlement of Dolev, who once proposed that the Supreme Court be torn down with a D9 tractor. He said smugly that “the IDF and the Israeli Police will ensure security and public order in Hebron better than any other force in the world.”

“This isn’t just about the observers. It is part of a much broader and bigger effort,” Avner Gvaryahu, the executive director of Breaking the Silence, told Al-Monitor. He said that several dramatic events have taken place in the city over the past four years, noting that anyone who still believes the occupation will end one day “should come to Hebron to see exactly what is preventing that from happening.”

Gvaryahu claims that neither the settlers nor the government want the world to see what is actually taking place in the city. “There is a deep-rooted process underway to empty downtown Hebron of its Palestinian residents and turn it into a ghost town,” he said. “From Hebron the evil will come forth.”

Now that he is in election mode, Netanyahu wants to appease the settlers as much as he possibly can. During a visit Jan. 28 to the West Bank area in the Etzion settlement bloc, where an alternative settlement is scheduled to be built for the evacuees of the Netiv Ha’avot settlement neighborhood, Netanyahu apologized for the Hebron Accords of 1997, claiming that they were “a mishap.” He said, "As far as I am concerned, there will not be anymore uprooting of communities or the cessation of [building in] communities, but rather the exact opposite. The Land of Israel is ours and it will remain ours. What has fallen will be rebuilt."

The settlers really understand the situation. They know that once the election is over, they will not be able to get everything that they can get now, with Netanyahu so susceptible to pressure. So far, they can take credit for one big victory.