Palestinians are asking the UN to intercede in Israel's decision to end the mandate of a peacekeeping force in Hebron, a decision they fear will lead to increased settlement activity in the West Bank city. 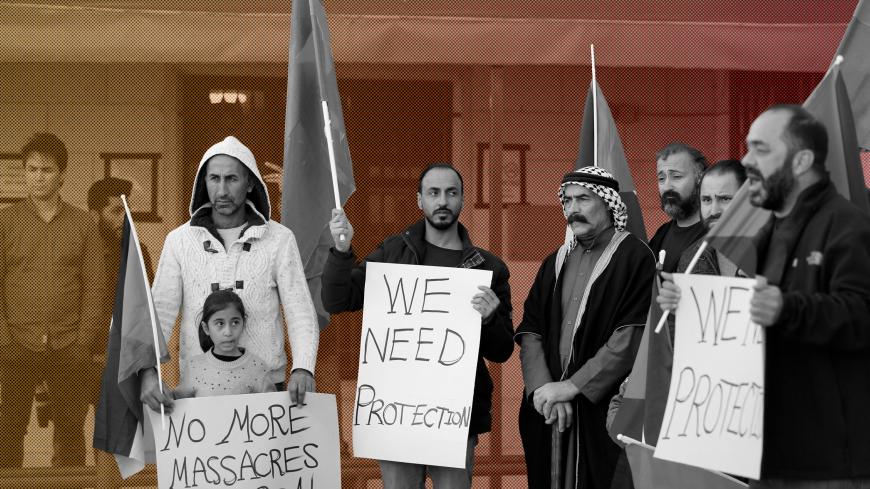 Palestinians take part in a protest against Israeli Prime Minister Benjamin Netanyahu's decision not to renew the mandate of the Temporary International Presence in Hebron, in the Israeli-occupied West Bank town of Hebron, Jan. 30, 2019. - REUTERS/Mussa Qawasma

RAMALLAH, West Bank — The Israeli government is expelling the Temporary International Presence in Hebron (TIPH) force, the civilian observation mission that has monitored the divided city in the southern West Bank for more than 20 years.

Israeli Prime Minister Benjamin Netanyahu decided Jan. 28 not to renew the TIPH mandate. “We will not allow the presence of the TIPH force that operates against us,” Netanyahu said in a statement to the press. Israel's Public Security Ministry accused the TIPH of cooperating with extremists and interfering with soldiers and police.

The TIPH’s mandate is normally renewed twice a year, in January and June, by the Palestinian Authority (PA) and Israel. The TIPH reports to its five founding countries — Turkey, Norway, Sweden, Switzerland and Italy — as well as the PA and Israel, on breaches of agreements on Hebron, as well as on violations of international humanitarian and human rights laws.

Saeb Erekat, secretary-general of the PLO Executive Committee, said at a press conference Jan. 31 that he had personally signed the renewal of the TIPH mandate Jan. 27. He confirmed, however, that the TIPH received the Israeli government's decision to terminate its mission.

The Israeli decision raised the PA's concern over possible repercussions on Palestinians in Hebron. The PA fears Israeli settlers will launch more attacks on Palestinian residents in the absence of a third-party observer. The PA also fears the decision will encourage Israelis' settlement activities, specifically in the old quarter and the southern area of Hebron.

Nabil Abu Rudeineh, spokesman for PA President Mahmoud Abbas, warned in a Jan. 28 press release of the impact Israel's decision could have on the situation in Hebron. “Israel's disregard of all signed agreements and its refusal to abide by its commitments create an atmosphere of tension and chaos, with unpredictable consequences,” he said.

In a Jan. 29 press release, Erekat said Israel’s decision is a preliminary step toward abolishing all bilateral agreements reached since the Oslo Accord on Palestinian autonomy in the 1990s. He described the nonrenewal of the TIPH’s mandate as a move toward the illegal annexation of the West Bank and the imposition of Greater Israel on Palestine’s historic land, demonstrating clear contempt for the UN and international laws.

Erekat said Netanyahu's decision represents “an open invitation to commit more massacres” that will give Israeli settlers the freedom to act against Palestinians without any supervision.

The TIPH was deployed in Hebron after the UN Security Council issued Resolution 904 in March 1994 in the wake of a massacre at the Hebron Mosque of Ibrahim. On Feb. 25, 1994, Israeli settler Baruch Goldstein gunned down 29 Palestinian worshipers and injured 125 others. The UNSC resolution called for “measures to be taken to guarantee the safety and protection of the Palestinian civilians throughout the occupied territory, including, [among other things], a temporary international or foreign presence.”

Representatives of the PA and Israel held bilateral negotiations in 1994 and asked Italy and Norway to deploy international observers temporarily in Hebron. The first TIPH mission began that May and withdrew from the city that August.

The signing of the Oslo II Interim Agreement on Sept. 28, 1995, called for a partial redeployment of the Israeli security forces in Hebron, along with a temporary international presence. On Feb. 1, 1997, the TIPH started operating in Hebron.

After Netanyahu's announcement, Norwegian Foreign Minister Ine Marie Eriksen Soreide told Reuters, “The one-sided Israeli decision can mean that the implementation of an important part of the Oslo Accord is discontinued.” She noted, "[The] situation in Hebron is unstable and characterized by conflict,” adding that the TIPH's expulsion is “worrying."

Hebron Deputy Gov. Khalid Dudin told Al-Monitor, “The TIPH is the only international witness that monitors attacks by the Israeli army and settlers in the old city of Hebron and the southern area. This did not please the settlers and the army.” He added, “The presence of the TIPH comforted Palestinian citizens, especially as the mission would document all acts on the ground.”

According to Dudin, the TIPH suspension ends the remainder of the Oslo agreement and the Hebron Protocol of 1997, and kills any potential chance for international protection of Palestinians, because Israel will not allow it. “The governorate is in contact with the PLO, the Ministry of Foreign Affairs and the Palestinian Mission at the UN to ask the UN and the world to pressure Israel into reneging on its decision.”

Netanyahu's decision comes in the midst of a fierce election campaign in Israel. All candidates, including Netanyahu, aspire to win the support of settlers.

“Netanyahu … is leading a battle to win every vote amid his difficult situation, against the background of his investigation on corruption charges," said Antoine Shalhat, director of the Israeli Scene Unit at the Palestinian Forum for Israeli Studies (MADAR). “In the last elections, Netanyahu relied on a right-wing base of settlers to become prime minister and he is trying to preserve this base for the legislative elections slated for April 9.”

Shalhat added, "The settlers in Hebron who incite against TIPH are the largest and the most radical part of this electoral base. This is why Netanyahu saw the expiry of TIPH as an opportunity to get rid of it and assert his loyalty to the settlers.”

He pointed out that the TIPH provides no physical protection to the Palestinian people on the ground, but rather monitors events and documents them in its reports. “The international community doesn't act or show any reaction to these reports. Yet Israel keeps rejecting the TIPH,” Khaled added, noting that the suspension of the TIPH mandate should be a problem acknowledged by the international community.

As the PA relentlessly calls for international protection for the Palestinian people, Netanyahu's decision to expel the TIPH forces seems to turn those hopes into a far-fetched dream.