How to apply the lessons from protecting Hebron to Jerusalem

The Temporary International Presence in Hebron has failed to make a major change in relations between Israelis and Palestinians, as many argue that a similar force in Jerusalem will not work unless it is given clear mandate and power to hold any violators accountable. 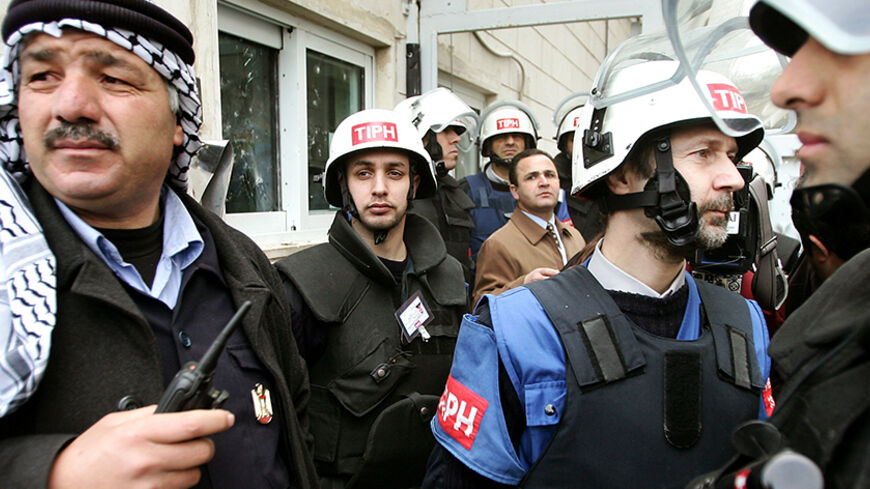 A Palestinian police officer (L) organizes protection for members of TIPH, or the Temporary International Presence in Hebron, wearing helmets and body armor at the gates of their headquarters in Hebron, Feb. 8, 2006. - REUTERS/Damir Sagolj

As the violence in the occupied territories that began with clashes on the Jewish New Year, Sept. 13, is escalating, Palestinian officials say that 70 Palestinians were killed in the month of October alone. Meanwhile, Palestinian calls for international protection have been gaining traction.

The United States attempted on Oct. 19 to finesse the issue by saying that even Jordan doesn’t accept international observers on the Haram al-Sharif. On the same day, a fatwa was issued by the head of the Supreme Islamic Council in Jerusalem, Ekrima Sabri, also echoing the Jordanian rejection.

But Palestinians continue to call for protection in Jerusalem and all other points of friction with Israeli settlers. France, as a permanent member of the UN Security Council, also supports the need for an international presence in Jerusalem until a solution is found.

While Israel’s UN representative rejected the idea, Palestine’s UN representative reminded the world of the 1994 resolution calling for disarming settlers and employing international observers. He also said that Israeli Prime Minister Benjamin Netanyahu had agreed — during his first term as prime minister — to the idea of international observers in Hebron back in 1997.

Ironically, Jerusalem, holy to the three monotheistic religions, and Hebron, where the patriarch Abraham — revered by Jews, Christians and Muslims — and his family are buried, witnessed the greatest violence in October.

As part of the Hebron Accords, an international observation force was deployed in Hebron on Jan. 21, 1997. Rebecca Bengtsson, press and information officer of the Temporary International Presence in Hebron (TIPH), told Al-Monitor that the international group is “a civilian observer mission” stationed in the city of Hebron.

“The TIPH mandate is to observe and report on breaches of the agreements on Hebron, as recognized human rights standards, and to present its confidential findings to the Palestinian and Israeli authorities and contributing countries [Denmark, Italy, Norway, Sweden, Switzerland and Turkey] only,” Bengtsson said.

TIPH was established to promote a feeling of security for the Palestinians of Hebron and to help promote stability in the city. TIPH observers patrol in Hebron seven days a week, 365 days a year, to assist in the monitoring obligations in the Hebron Accords.

Bengtsson, a Swedish national, added, “As a civilian observer mission, TIPH is not mandated to intervene in disputes or conflicts or in the activities of the security forces of either party.”

Kathy Kern, who has worked with the Christian Peacemaker Teams in Palestine as a field worker since 1995, told Al-Monitor that the restraints imposed on the TIPH officers prevent them from doing the sort of job they need to do.

“In their own countries, as police officers, if they saw people being assaulted, they would be able to intervene. They write these reports of egregious human rights abuses all day, which get filed away and are never heard from again, because part of the condition of their presence is that no one may ever read them,” she said.

Kern, now an editor of the faith-based American group’s newsletter, added that Jewish settlers in Hebron “hate TIPH with a passion despite the latter’s inability to provide serious changes on the ground.”

While made up of police officers in their countries, TIPH officers act within the mandate approved by Israel and the Palestinian Authority (PA), which makes their efforts extremely limited and their reports fully confidential to the public. Their importance is in their physical presence in hot spots rather than anything else.

Palestinians in Hebron similarly belittle the importance of the international observers. Nayef Hashlamoun, head of Al-Watan cultural center in Hebron, told Al-Monitor that he is not convinced of the importance of the international force. “The only thing they do is document what is happening and they keep it confidential. Journalists do a better job and they make their reports public,” he said.

Hashlamoun said that if the idea is to be replicated in Jerusalem, a completely different mandate must be agreed to. “Palestinians are dying every day in Hebron and they are unable to do anything to stop this aggression. What is needed is an international force with teeth and a strong mandate to stop this assault against our people,” he said.

Jonathan Brenneman, another field worker with the Christian Peacemaker Teams in Hebron, told Al-Monitor that the stipulations in the TIPH mandate made it ineffective at enforcing the 1997 Hebron Accords.

“The biggest drawback is that the only power TIPH had was to observe and report back to their home governments. This made them impotent to stop Israeli — or Palestinian — breaches of the accord. When Israel sets up more checkpoints or closed off Shuhada Street, TIPH could only observe and report. These reports cannot be made public, so no one knows what was reported, how the TIPH country governments responded or what effect it had on Israel except that today Israel has neglected nearly all of its responsibilities under the Hebron Accords,” Brenneman said.

After volunteering for one year, Brenneman was denied entry into Israel in May 2014. Now volunteering in South Africa, Brenneman says that TIPH was not a “deterrent” as it was expected to be through their mean presence.

A major part of the failure of TIPH lies in the fact that the Israeli government and army do not follow up on what is happening as documented in the TIPH reports, a fact that the settlers appear to understand and therefore clearly flaunt.

The clashes between Israelis and Palestinians in the occupied territories are not confined to the local population against the colonial Jewish settlers. It is clear that the Israeli troops are as much part of the problem in day-to-day conflicts, thus the importance of a third party. But for any international observers to be able to restore peace — whether in Hebron or Jerusalem — it is obvious that such an international force needs to have a strong mandate and the ability to do more than file confidential reports.