Israel wins this round against Iran in Syria

According to security sources, the Iranians, headed by Revolutionary Guard commander Qasem Soleimani, prepared its recent attack from Syria against Israel for weeks. 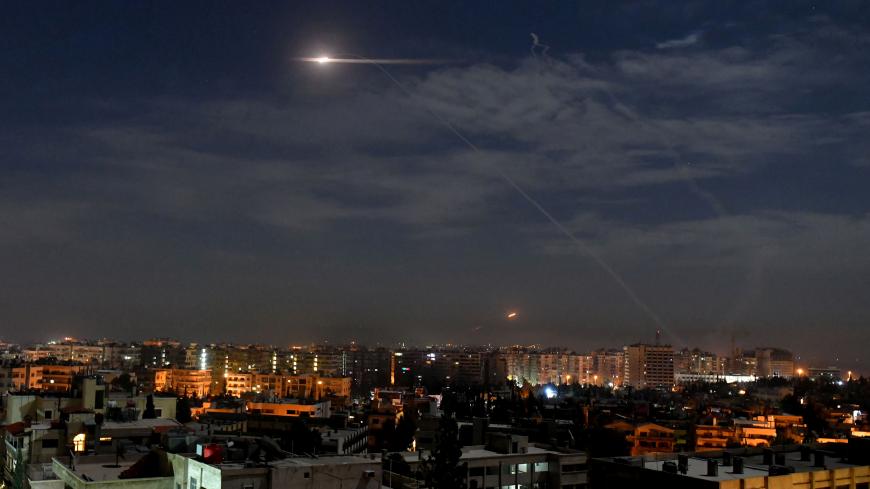 On the afternoon of Jan. 21, after another round of the heavyweight fight of the year between Israel and Iran, the Israel Defense Forces' Twitter account released the following tweet: It shows a map of the Middle East, from the Persian Gulf on the east to the Mediterranean Sea on the west, under the headline, “Iran, you seem to be lost.” Four red arrows on the map point to Iran’s geographic location with the caption, “This is where you belong,” while another red arrow points to the Damascus region with the text, “Iran is here.”

This tweet went viral quickly. It reflects the clear Israeli victory in this round as well, portrays Israel’s main arguments about Iranian meddling in another state, and a healthy sense of humor as well. Nevertheless, Israel realized that this was only the first boxing round with many more to come. Over the last year, Iran absorbed numerous blows from its Israeli adversary, but it is far from abandoning ship. A high-level Israeli military source told Al-Monitor on condition of anonymity, “[Commander of the Revolutionary Guard] Qasem Soleimani evidently has a strong constitution. He keeps getting beaten up, but shows no signs of admitting defeat.”

The round of blows on Jan. 20 had been carefully prepared by both sides. The Iranians worked on it for many weeks, under the watchful eyes of Israeli intelligence. And Israel, for its part, meticulously prepared its response. According to a wave of publicity in the Arab media on Jan. 20, the strike was attributed to Israel. Israel evidently attacked Damascus’ international airport only a few days after the Russians announced their opposition to continued assaults on this very same airport. This happened on the afternoon of Jan. 20, during a wave of publicity in the Arab media, and then also during the night.

The Russians reacted to the attack only on the afternoon of Jan. 23. A Russian spokesperson said that Israel must stop attacking Syria. A Western diplomat, who spoke with Al-Monitor on condition of anonymity, said that the reason the response arrived so late is simple: The Russians are embarrassed. They had assured Israel in the past that the Iranians will remain 80 to 100 kilometers from the Israeli border; and now, this has turned into an empty promise. On the afternoon of Jan. 20, the Revolutionary Guard launched a Ra’ad-type rocket toward Israel, from a base held by Soleimani forces near Damascus. And this is a region they are not supposed to be in at all.

It all began around 1 p.m. on Jan. 20. According to media reports, the Israeli air force carried out an unusual strike in the region of the Damascus international airport. Usually, Israel attacks at night. This time (which Israel has not taken responsibility for) it was carried out in the light of day. This probably was because of an immediate intelligence and operational opportunity that they didn’t want to pass up. The Syrians announced that the assault was halted and the missiles were intercepted. Evidently, their announcement has no basis in reality. On the other hand, an Iranian cargo plane belonging to the Revolutionary Guard, which was making its way from Tehran to Damascus at exactly that point in time, made a sharp U-turn and went home.

About an hour later came the Iranian response: the launching of a guided missile toward Israel. The Israeli Hermon touristic site was crowded at the time, with thousands of merry skiers following several stormy snow-days in the week preceding the event. The missile was supposed to create a large number of civilian casualties. However, an Iron Dome missile defense battery intercepted the Iranian missile above the site. The scene was surrealistic: a lovely sunny day, a ski site full of visitors. The skiers were busy photographing the snow-skiing on the ground when, unbeknownst to them, the cameras picked up interception of the missile in the skies above! Within minutes, this scene went viral on the social networks.

Israel has several defense layers against threats of this type. For example, if the Iron Dome does not work for some reason, next on the list is the Magic Wand (or David’s Sling) — an interception system for a longer range. One way or the other, the missile/rocket would be intercepted and a catastrophe would be averted. Prime Minister Benjamin Netanyahu was, at the time, making a historic visit to Chad, which included renewal of diplomatic relations after 40 years of disconnection. The new chief of staff, Lt. Gen. Aviv Kochavi, was only a few days into his new position. All that didn’t prevent the system from operating the program that had been prepared in advance: IDF spokesman Brig. Gen. Ronen Manelis personally announced that the Iranian missile had been launched by the Quds Forces of the Revolutionary Guard themselves: not by a proxy, not militias, no agents or representatives but Soleimani himself. This was the “incrimination.” At night came the assault: Israel’s air force struck Damascus’ international airport, destroyed a large Iranian weapons storage area and flattened a large number of Iranian targets throughout Syria. On Jan. 22 it was announced that about 21 people had been killed in the Israeli attack: 12 of them were Iranians, the rest were Syrian soldiers.

On the weekend that preceded the event above, a large Russian military delegation completed a work-visit in Israel, in which security procedures between the armies were sharpened and enhanced. This included a special mechanism or system designed to prevent friction. On the night of Jan. 21 this mechanism underwent another especially sensitive test. The Israeli contact person called his Russian counterpart a short time before the assault and updated him. The Russians could not protest, because they were well aware that the launching of the Iranian missile proved that the Russians were not carrying out their side of the deal. Soleimani disregarded his commitments not to enter the “forbidden region,” and even launched missiles from that region, toward Israel.

Simultaneously, the following Israeli message was transferred to the Syrians: If you don’t interfere, we won’t harm you. If you retaliate, you will be harmed. Syrian President Bashar al-Assad decided to retaliate. Syrian anti-aircraft batteries broke out with crazy shooting in every direction. Israel’s air force immediately destroyed seven to eight Syrian defense batteries, including launching trucks and stationary batteries.

When the dust settled, it became clear that this round was another undisputed Israeli victory. Soleimani again found himself in a region in which the IDF has a clear advantage over him. Israel leads in intelligence, rules the air, displays remarkable accuracy and operates almost undisturbed. There’s also one more thing: Prime Minister Netanyahu, in the midst of a rather messy election campaign, took Israel’s famous ambiguity policy — and cut it into shreds. Now he happily takes responsibility for every attack or missile fired by Israeli air force planes. In this context, Netanyahu has come under criticism. “Why is he bragging?" asked sources in the opposition, in a conversation with Al-Monitor, speaking on condition of anonymity. “Why is he poking his finger in the other side’s eye, forcing them to retaliate?”

The truth is that there is a reason behind the Israeli haughtiness: Soleimani has been putting on a fake show for his bosses in Tehran, and the Iranian people in general. He keeps his military losses under wraps, enlarges the achievements and tries to create an imaginary picture of victory. Israel’s public announcements throw cold water on his attempts. Meanwhile, Israel is tensely following the internal debates within Iran, between President Hassan Rouhani's supporters (who would love to wrap up all their Iranian interests in Syria and come home), and Soleimani, who continues to drag Iranian spiritual leader Khamenei toward “exporting the revolution.” Israel extracts a high price from him at every step, and runs to tell everyone else. And that’s the story.