Tensions have escalated between Iraqi Kurds and Turkey in Iraq’s Kurdistan Region as a violent protest that stormed in a Turkish military base near the city of Dahuk left one dead and at least 10 others wounded. 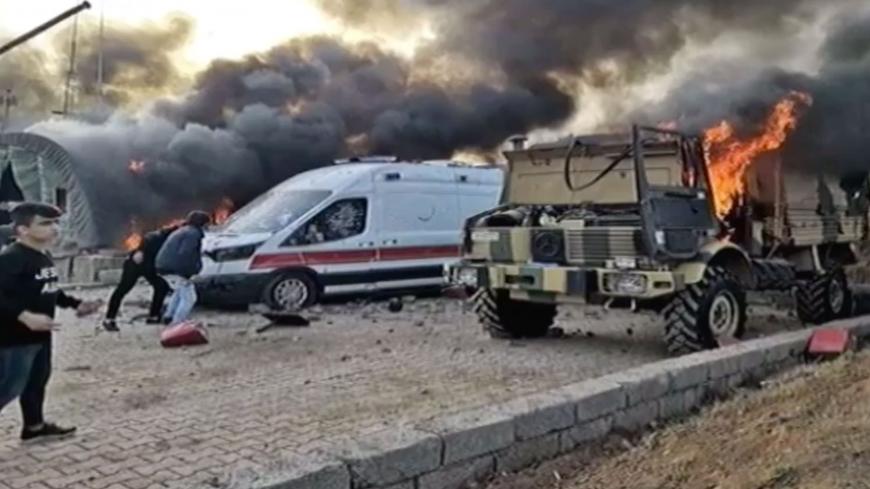 Protesters storm a Turkish military camp near Dahuk, Iraq, in this screenshot from a video uploaded Jan. 26, 2019. - YouTube/KNN

SULAIMANIYAH, Iraq — In the wake of the death of yet another group of Kurdish civilians in a Jan. 23 attack by Turkish jets and the unprecedented violence that engulfed the occupying Turkish soldiers based in the area, anger is simmering among many Iraqi Kurds living in these highlands toward both the Turkish government and the militants of the Kurdistan Workers Party (PKK) as well as the Kurdistan Regional Government (KRG) and the Iraqi state for failing to protect them.

These local Kurds, caught between various competing forces, feel abandoned by their government as they go about their lives in their region. “There is not a single family in our region who hasn’t lost a member to the Turkish airstrikes,” rights activist Ahmad Shamki in Shiladeza told Al-Monitor via telephone. “In 1996 my 17-year-old brother Ali was killed in a Turkish airstrike and we could not collect his body for 13 days from our village on the border with Turkey, the same year my wife also lost three relatives in an airstrike and their bodies were never recovered.”

The area in Dahuk province where the strikes take place would have been a popular tourist destination had it not been for the looming threat of violence from the PKK militants and Turkish drones and jets.

In the scorching heat of last summer, I decided to visit the Valley of Balinda near Shiladeza in Dahuk province, the area where the four men were killed recently. The area is stunningly scenic, with lush forest, high peaks and the Ava Sin River, ideal for camping and swimming. Iraqi Arabs and Kurds from all over the country flock to the area in the summer to escape high temperatures. On the road from Dahuk to Shiladeza, we passed at least three Turkish army bases including one in the town of Shiladeza itself. These bases were built and gradually expanded after August 1996 during the Kurdish civil war when the Iraqi army of Saddam Hussein and the Turkish army allied with the Kurdistan Democratic Party (KDP) faced off against the Patriotic Union of Kurdistan (PUK) backed by Iran's powerful Islamic Revolutionary Guard Corps.

That day, July 13, we decided to drive past the KRG's Asayish checkpoint at the mouth of the valley and drive deep into the picturesque area. But there was a catch. From a previous trip, I knew that the PKK were there and that Turkish drones were hovering silently above the canopy. Turkey has been involved in an extensive air campaign against the PKK with US assistance since 2007. The United States and Turkey operate a joint operation room in Ankara. According to Secretary-General of the Peshmerga Ministry Jabar Yawar, since January 2015, Turkey has conducted close to 400 airstrikes and over 400 artillery strikes in Iraqi Kurdistan.

There was a heated discussion between us (two journalists, one businessman and a government employee) about whether to proceed deep into PKK territory. Finally, common sense prevailed and we turned around the moment we saw the first PKK flag and a banner of its imprisoned leader Abdullah Ocalan around 20 kilometers (12 miles) from the Turkish army base in Shiladeza. Across the river we could see the charred carcasses of vehicles, possibly struck by the Turkish drones and jets. We stopped and swam by the Asayish checkpoint and returned to the safety of an area close to Dahuk for the night. While we could afford to turn around and avoid the PKK territory, many locals rely on the land for their livelihoods, raising cattle, beekeeping and tending their orchards and vineyards.

The following day, the Turkish drones or possibly jets struck the area we visited the day before and killed Delil Karakocan, a senior PKK commander with 26 years of experience fighting the Turkish army, and two of his companions. But while on this occasion the target was the PKK, on many others, civilians pay the ultimate price. In March last year, Turkish jets struck an area near Choman in Erbil province, killing four civilians. On Nov. 14, Turkish jets struck again near Shiladeza and killed three beekeepers.

These airstrikes raised tensions in the Amediya area of Dahuk, home to Christians, Muslims and other minorities. The Iraqi and Kurdish authorities’ meek response was no consolation to the locals. So when on Jan. 23 the news came out that the Turkish jets had killed another group of four civilians in a village near Deraluk in Dahuk province, the locals decided to take action. One popular Facebook page chided the parliamentarians from the area for their silence in the face of this tragedy.

The Kurdistan Democratic Party (KDP) in charge of the area is in a difficult position. Turkey acts as the main trading artery for the the landlocked Kurdish region and a strategic ally and backer of the KDP in balancing power with Iran in the Kurdistan region. Under international law, the KDP cannot allow its territory to be used against a neighboring state. But on the other hand, the Kurds recognize the PKK as a national Kurdish movement that struggles against the Turkish state using armed rebellion, something the KDP did against Baghdad for over four decades. If the KDP moves against the PKK fighters to force them out, it will be accused of fratricide. But even the PUK, which has been a strong ally of the PKK over the years, has come to believe that the PKK cannot roam the Kurdistan region as freely as it used to.

Over Facebook, the activists organized a mass rally for Jan. 25. Hundreds of people including women and children marched through Deraluk in honor of the four civilians, condemning the Turkish airstrikes and calling on the PKK to leave the area to avoid further civilian casualties. They also called on the PKK and Turkey to respect the sovereignty of the Kurdistan region and stop the fighting on KRG land “so these kinds of tragedies are not repeated again.”

Hussein Rekani, 17, left his home on Jan. 26 to take part in yet another protest. By 3 p.m., the protesters from both Shiladeza and Deraluk charged the Turkish base in the area. The Turkish soldiers responded with live ammunition. Just before 5 p.m., two bullets pierced Rekani’s chest and he died immediately. More than 10 protesters were wounded. Soon the KRG forces took over the scene, detaining activists and journalists.

The attack on the Turkish base was unprecedented and has been described as "uprising" in the Kurdish social media. As the KRG tries to deal with its aftermath, the locals realize that they are stuck between a rock and a hard place and there is no end in sight for them. As the PKK and Ankara up the ante, the civilians in this mountainous region of northern Iraq who have to venture into these dangerous valleys to make a living are learning that their lives are nothing but collateral in the wider war game in the region.

“People are fed up and want the PKK and Turkish forces to leave our area,” Shamki the activist told Al-Monitor. “If this situation continues, the people’s anger may be directed at the PKK next time.”