While Europe says it remains committed to the nuclear deal with Iran, the US withdrawal from the accord has created overcompliance with sanctions among banks that has made life difficult for Iranian students in Europe; however, Iranian students in the United States tell Al-Monitor they have not experienced such difficulties. 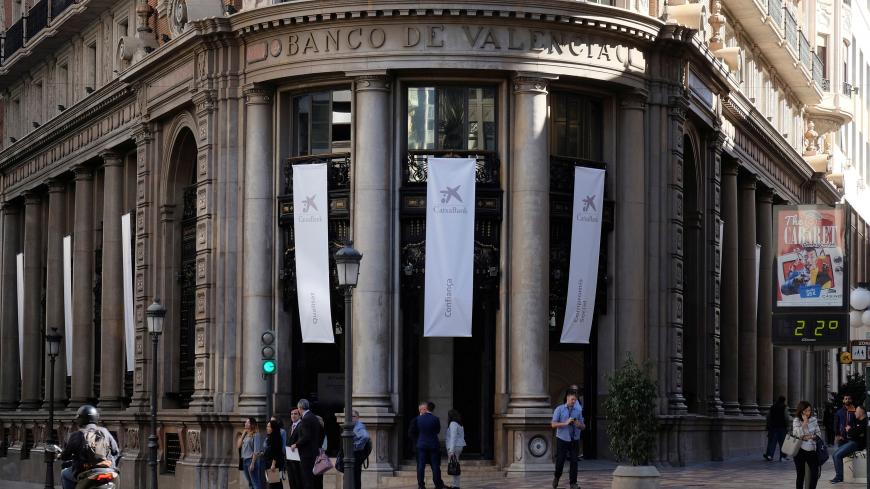 CaixaBank's new headquarters in Valencia, Spain, Oct. 24, 2017. An Iranian student says she was unable to open an account at a Caixa branch in Madrid. - REUTERS/Heino Kalis

The reimposition of US sanctions on Iran has created many difficulties for Iranian students who are studying abroad — including in Europe. The root of these hardships seems to be European companies’ fear of potential US penalties.

Sima is an Iranian student pursuing a doctorate in mechanical engineering who traveled to Spain in September to take part in a one-year research program. She has not yet been able to open a bank account in the country, and told Al-Monitor she has had to hide the money she brought with her from Iran in her bag and take it wherever she goes in Madrid. Other Iranian students have faced similar difficulties in Europe; since the United States reimposed sanctions against Iran last year, European banks seem to have increasingly imposed restrictions on Iranian students — including refusing to open accounts.

Sima said, “I went to Bankia, Banka and Caixa in Madrid and none of them agreed to open an account for me. As soon as they realized I was from Iran, they said they could not open accounts for Iranians.” Sima said only one bank was willing to do this for her — but on condition she present her residency card, which takes up to three months to be issued. “Santander was the only bank that agreed to open an account for me. So, until I get my residency card, I have to carry my money with me in my bag, which has been the case since September.”

Similar cases have been reported in Germany, Italy and France.

Ali is a master’s student in economics and marketing in the city of Lyon. He moved to France in 2018 and has also faced many difficulties with opening a bank account. He told Al-Monitor, “When I arrived in France, I searched the internet to see which banks in France were better known so I could open an account with a reliable bank.”

In the end, Ali decided to go with BNP Paribas. “The people at the bank were very nice to me and gave me the necessary forms to fill out, but then one of the clerks asked where I was from. As soon as I said Iran, he apologized and said that they cannot open an account for Iranians. I was surprised and asked why. The clerk said that it was because of US sanctions, to which I responded: ‘But what do US sanctions have to do with me, a student in France, and with you?’ His answer was that they had a lot of dealings with the US and unfortunately could not open an account for an Iranian.”

Ali told Al-Monitor he had also approached banks such as Citibank, Banque Populaire and CIS, but that all of them had given him a negative response. Only Post Bank agreed to open an account for him.

The situation in Italy isn’t much better for Iranian students. Hamed, an international relations student at Florence University, said he went to several banks such as Unicredit, UBI, BNL, Firenze Bank and Banca Monte Paschi di Siena and that they all turned him down. Ultimately, Post Bank was the only bank that agreed to open an account for him — on condition he present his tax code card, which takes 45 days to arrive.

As recently as 2016, it was much easier for Iranian students to open accounts at various Italian banks. Now most students have no choice but to go to Post Bank.

There does not appear to be a set protocol within banks when it comes to this issue. For example, it could be that one bank branch will not open an account for an Iranian student, but another branch of the same bank will.

Hamed told Al-Monitor about his experience with a clerk at a branch of Banca Monte Paschi di Siena. “After the bank clerk told me he could not open an account for Iranians, I asked to speak to the branch manager. I told the manager that my friend had opened an account with the bank just last year and so how was it that they were not willing to do it for me now? He responded that I was correct but added that the bank could easily return the Mastercard or Visa debit cards that were previously issued to Iranians and close their accounts. He then said that … an Iranian who worked here [in Italy] had approached him to apply for a credit card but that he had told that Iranian that he should be happy that the bank had not closed his account, adding that because of US sanctions, it is impossible to issue a credit card to Iranians.”

As a result of conducting many interviews with Iranian students in Italy, Al-Monitor has learned that there have been numerous instances where Italian banks have frozen their accounts. Although the closures are temporary, they can sometimes last for months. Given that Iranians have no other option to make bank transfers to Europe, these students are faced with constant difficulties.

This uncertainty has also increased in Germany in recent months. Golnaz, a master's student in architecture at Frankfurt University, told Al-Monitor she had waited for more than 18 months just to get a visa appointment at the German Embassy in Tehran. After finally arriving in Germany in October, she faced many challenges for opening a bank account. Golnaz said, “I went to Deutsche Bank and Commerzbank to open an account, but both told me that they could not do so as soon as they found out I was Iranian. They gave no explanation for their decision other than that I come from Iran.”

With the United States barring the entry of Iranian nationals as well as the US withdrawal from the Joint Comprehensive Plan of Action, the situation has become very difficult for Iranian students in the United States, too. The challenges such students face include extensive waiting periods to get student visas.

However, after interviewing several Iranian students in the United States, Al-Monitor became aware that none of them faced any difficulties with opening bank accounts. This pattern would suggest that European signatories to the nuclear deal — which have sought to reprimand the United States for pulling out of the accord — appear to have taken over the lead from the United States when it comes to making life difficult for Iranian students, a group Europe has claimed will not be the target of sanctions.