Iranians are finding it almost impossible to get a visa to EU countries these days unless they seek assistance from intermediaries known as “visa mafias." 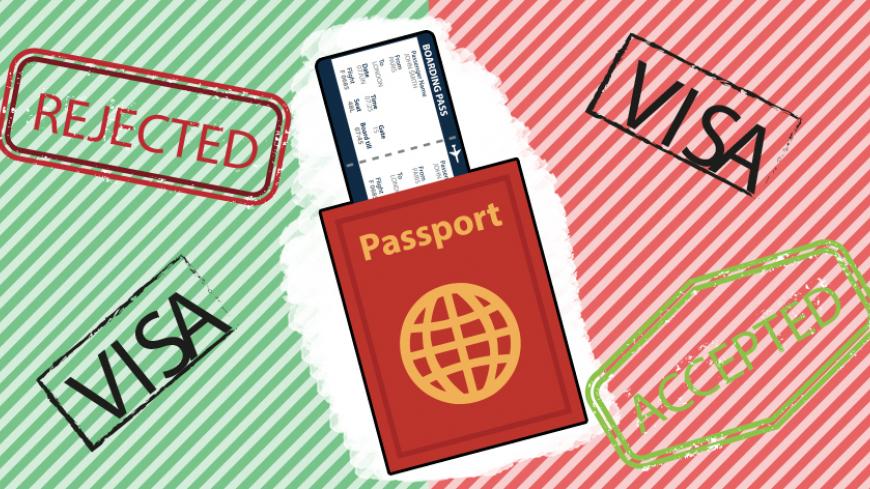 Iranians trying to obtain a visa to visit the European Union are having to dedicate lots of time or lots of money to do so. Image by Hugo Goodridge/Al-Monitor -

TEHRAN, Iran — Iranians who wish to travel to the European Union face myriad challenges, in particular obtaining visas. Indeed, the state of political relations between Tehran and the EU states has made the visa application process difficult for citizens of Iran. These difficulties have in turn led to the emergence of a “visa mafia” of sorts, in the form of travel agents who help Iranians obtain visas. Under the current circumstances, even booking an appointment for a visa interview has become almost impossible.

For instance, to travel to France, Iranian applicants first need to schedule an appointment for an interview through the French Embassy’s website. On the surface, everything appears to go smoothly, but the response many encounter is that their desired time slot is unavailable. More often than not, multiple emails and other approaches to the embassy are required before an interview can be scheduled, typically for two or three months down the line. There is, however, a shortcut.

Searching “scheduling visa appointments” (in Persian) online returns all kinds of agencies and companies offering to help Iranians obtain visas immediately. Al-Monitor contacted one such agency claiming to help with scheduling appointments and obtaining visas. Contrary to assertions made on its website, the agency said it could not arrange a single appointment at the French Embassy. The young woman on the other end of the line, however, expanded on the many other available options for securing a visa to Europe.

“If you have never received a Schengen visa before, I would need to obtain a single-entry visa for you from Switzerland. You can then travel to other Schengen countries from there,” she said. “The expenses, including a three-day stay in Zurich, Lausanne or Geneva, will be 1,690 euros. The process of scheduling an appointment and obtaining the visa will take less than a month, which means you can book your plane ticket for 40 days from now. However, if you have had a Schengen visa before, I can get you a multiple-entry visa for the Netherlands, which will be more expensive, costing 2,000 euros.”

In contrast, Iranian applicants who seek to obtain visas on their own commonly need to provide an extensive list of documentation, including evidence of employment, copies of bank accounts for the preceding six months showing transactions, translated copies of deeds for residential property, insurance certificates from employers, as well as completed applications. Despite all this, if an applicant has never held a Schengen visa, he or she is unlikely to be granted one now.

Getting in touch with the British Embassy in Tehran is so difficult that it can only be done via third parties. One report about intermediaries selling visa appointments for interviews at the German Embassy created great controversy. Italy is another country with a difficult application process for tourist visas for Iranians.

Al-Monitor visited the Italian Embassy on Tehran’s upscale Jordan (Africa) Avenue, arriving at 8 a.m. on a weekday. Some 200 young people were waiting out front and in an adjacent park. Some had been waiting outside the compound since the previous night. Each new arrival adds his or her name to an A4 sheet of paper, and when the embassy opens its doors, the applicants enter in accordance with their place on the list. Most of them were there for student visas. Applicants seeking visas for purposes of tourism add their names to a separate, shorter list.

Al-Monitor approached a young woman named Leyli, who said she was there for a tourist visa. She had gone through a lot of trouble to book an interview. “It is almost impossible to get your visa independently and directly from the embassy,” she said. “This is my third time here, and I am always told that they are busy and that I should come back next week. I ask myself, however, doesn't this embassy have rules and regulations? Why do they issue more appointments than they can handle in one day? If you are sent by an agency, however, you can immediately enter the embassy, you are treated with respect, and you will be taken care of.”

After spending an hour in front of the embassy, Al-Monitor noticed the travel agency representatives. The embassy gatekeeper, who was rude to almost everyone, clearly knew the agency reps and quickly guided them and their companions inside.

When asked about the process of obtaining visas, one of the agency representatives dismissively said that he was too busy to explain things and instead gave Al-Monitor his card. Contacted the next day about obtaining a visa to enter Italy, he said, “We guarantee a 15-day visa. If you want a monthlong visa, we will charge you 1.5 million toman [$461] for the embassy appointment and then 850 euros for a guaranteed visa. This amount is only for the visa process. You are responsible for your travel and hotel expenses in Italy yourself.”

He further explained, “If you need your visa quickly, we can process it for you in two weeks, but that will require 4 million toman [$1,230] instead of 1.5 million toman. We work with other countries as well, and if you want, we can get you a visa for Portugal for a cheaper price. The visa for Portugal costs 1,250 euros, and this price includes a four-night stay in a four-star hotel in Lisbon.”

Based on information obtained from contacting several agencies, the visa mafia is active at the embassies of several European countries. Media reports on its existence forced Foreign Ministry spokesman Bahram Ghassemi to address the matter July 9. “Unfortunately, rings consisting of travel agencies and airline companies, in collaboration with certain sections inside the European embassies, have become active in this field,” Ghassemi said. “We have contacted some of these embassies and have explained the situation to them. We have yet, however, to eliminate this problem, and we are in need of more extensive collaboration [with the relevant authorities and figures].”

Al-Monitor sought comment from the Italian, Portuguese, Swiss, French and Dutch Embassies, but had not received a response from any of them at the time of publication.