Head of Sinai Reconstruction Authority speaks about development in Sinai 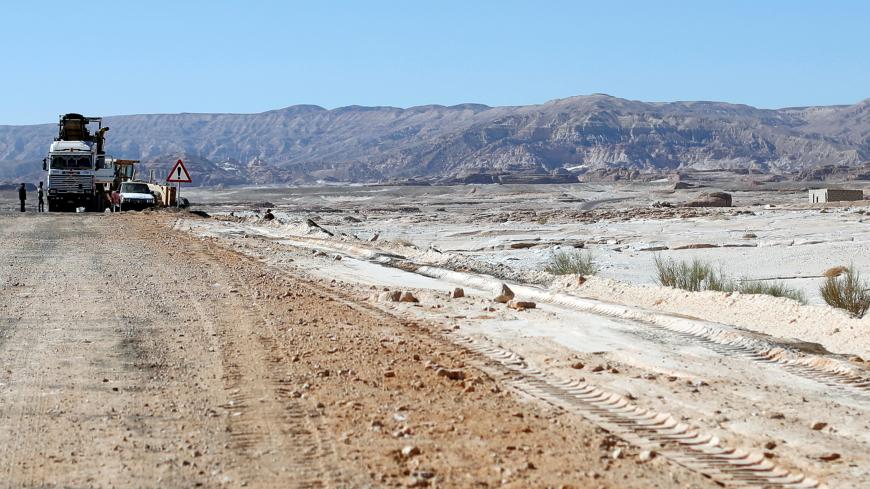 Hamed said in an interview with Al-Monitor that the Sinai tribes play a major national role in the global war on terrorism and serve as the driving force behind the expansion of development projects. He also noted that the state has allocated 275 billion Egyptian pounds ($15.3 billion) to the Sinai region until 2022.

Al-Monitor:  Nearly 10 months after the Egyptian army launched its counterterrorism campaign targeting Islamist insurgents in Sinai calm has returned to some of the peninsula’s cities. How is the government reassuring investors and developers that the conflict is over?

Hamed:  There will be no development without security and safety. If it weren’t for the achievement accomplished by the comprehensive military operation there would have been no development in Sinai and investors would not have been called to invest in the region. I would like to emphasize that the security conditions are very different now in northern Sinai, where plans for development projects are underway in addition to the projects that were completed. The main point of attraction for investors is the return of complete security. This has been largely achieved thanks to the implementation of the comprehensive military operation.

Al-Monitor:  What is the estimated cost of reconstruction projects in Sinai? And who is providing funding?

Hamed:  The state is funding development projects in Sinai. Some development projects and works are funded by some Arab funds and donations by Egyptian businessmen. In consideration of the importance of Sinai for Egypt, the state has earmarked investments in this region of 275 billion Egyptian pounds until 2022.

Al-Monitor:  How many people reside in Sinai? And does the state want to increase the number of Sinai citizens through development projects?

Hamed:  A couple of years ago, the state developed a plan to increase the number of residents in Sinai to 3 million by 2017, but the plan failed to materialize. The population only amounts to 800,000 now. We are currently completing the plan with support of the current political leadership, which doubled the volume of development projects within the city and established more tunnels [new roads leading to Sinai​]. This should help achieve the required proportion of the population.

Al-Monitor:  How many projects are currently being carried out? What field are you focusing on?

Hamed:  We are carrying out development projects in all fields in a bid to enhance investment and development opportunities in Egypt. We have established 17 development communities in 17 locations across Sinai, and we have expanded social housing projects in several cities. We have also worked on providing uninterrupted power supply to nomadic communities and connected these communities to the main roads leading to cities. In addition, there is a plan to establish 12 cultivation farms in northern Sinai and 12 farms in the south, not to mention the June 30 axis road that stretches along 95 kilometers [59 miles] and contributes to linking northern Sinai to the Arab Republic of Egypt. This road aims at facilitating the transport of raw materials destined for governmental development plans. More importantly, the executive authorities will be establishing four new tunnels to facilitate the movement to Sinai and increase the number of residents there.

Al-Monitor:  Have you finished implementing the scheduled projects for al-Rawda village in northern Sinai, where the Al-Rawda Mosque attack left over 300 worshippers dead late last year? What projects are planned for al-Rawda?

Hamed:  Yes, after the terrorist incident the prime minister entrusted me with rehabilitating the schools, houses and governmental bodies of al-Rawdah village. We have already established 300 housing units in the village and rehabilitated its infrastructure. We also upgraded the water network and the internal roads and established a service complex and an agricultural community in the village. We also renovated 700 houses and more than 60% of the houses have been completed.

Al-Monitor:  What specific efforts are currently being made to improve security?

Hamed:  The efforts related to improving the security situation are part of the responsibilities of the armed forces and the police. We have noticed a great improvement in this sense, and this will certainly help us kick off a series of development projects shortly.

Al-Monitor:  What is the role of locals and tribes in the development process that the state is implementing?

Hamed:  The tribes in Sinai play a major national role in the global war on terrorism through continued cooperation with the armed forces and the police. This is the main point that paves the way for the comprehensive development process. These tribes also serve as the driving force behind the expansion of development projects.