Syria’s Kurds seek outside help to negotiate with regime

Though the Syrian military recently came to the aid of Kurds in the face of a Turkish attack, the Kurds still have differences to settle with the regime and are hoping for external mediation. 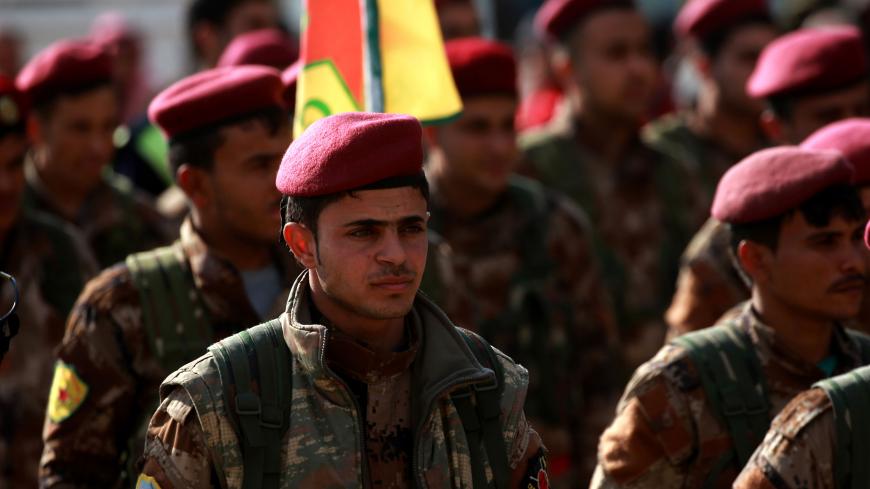 The US decision — and subsequent indecision — about withdrawing troops from Syria has created a shifting and complex lineup of alliances that would puzzle Rube Goldberg.

Syria's Kurds, the Syrian regime and Turkey are hoping Egypt and/or Russia can negotiate an agreement among them despite their very different goals. A Kurdish delegation is expected to visit Cairo soon. Turkish President Recep Tayyip Erdogan hopes to meet with Russian President Vladimir Putin in Moscow this month. The Kurds have also been in contact with Russia.

On Dec. 28, at the Kurds' request, the Syrian government sent forces to stop what appeared to be an imminent Turkish offensive against the Kurds around Syria's Manbij area. Syria's assistance has allowed 400 fighters from the Kurdish People’s Protection Units (YPG) to withdraw from the area.

The YPG fights under the umbrella of the Syrian Democratic Forces (SDF). Turkey considers the YPG to be affiliated with terrorists, while the SDF has helped the United States fight the Islamic State in Syria.

A US withdrawal would have left the Kurds at Turkey's mercy without Syria's intervention. Ankara, meanwhile, said Jan. 9 that it won't be deterred from pursuing the Kurds if it feels threatened.

Now, Kurdish leaders from the Syrian Democratic Council (SDC), the SDF’s political wing, want negotiations as soon as possible that could lead to a political settlement between Damascus and the Kurdish factions.

“Our brotherly Egyptians declared their readiness to play a role in converging views with Damascus. And we believe Cairo has what it takes politically and regionally to play this role," SDC member Hushnak Darwish told Al-Monitor. Darwish headed an SDC delegation during a visit to Cairo in late November, where he met with senior officials from the Egyptian Foreign Ministry to discuss a settlement with Damascus.

He stressed that reaching a political settlement has become an urgent necessity.

The SDF, a coalition of Kurdish fighters and Arab tribes, controls about 26% of the Syrian territories, mainly in the north and east of the Euphrates River, according to a report published Aug. 1 by the Jusoor for Studies Center in Turkey. The SDF seeks to create a federation in areas inhabited by Kurds in northern Syria. It also wants to ensure that the Kurds' political and social rights are included once a new constitution is developed.

“The Syrian leadership must realize we are facing new political realities in light of all these political and geographic changes in Syria after this long war,” Darwish insisted.

Elham Ahmed, head of the SDC's executive body, confirmed to Al-Monitor that the SDC is hoping Cairo will sponsor an agreement between the Syrian government and Kurdish factions.

Brig. Khalid Okasha, a member of Egypt's National Council to Confront Terrorism and Extremism, told Al-Monitor that Egypt is qualified to play an important role in the negotiations between Damascus and the SDC because of its good relations with both parties. Since Egyptian President Abdel Fattah al-Sisi acceded to power in 2013, Cairo has stressed its support for the official Syrian institutions. However, he added, “Each of the two parties has its own demands and each of them is attempting to convey them to the other, but no progress regarding these demands has been made so far."

Egypt is accepted as an impartial mediator by all the warring parties except Turkey and has mediated temporary cease-fires in Syria in the past.

On Dec. 28, Turkish President Recep Tayyip Erdogan questioned how long the Kurdish fighters' withdrawal from Manbij will last. He added that Ankara's mission in northern Syria is to purge terrorist groups from the entire area, not only Manbij.

Under the current regional circumstances — including the potential US pullout from northern Syria and Turkey's threats to launch a military operation — the Kurdish fighters have little leverage and will have to reduce their demands, according to Ibrahim Kaban, a researcher at the Kurdish Center for Studies based in Germany.

“Given the current adverse conditions and the massive Russian support for Damascus, a Kurdish federation has become a thing of the past,” Kaban told Al-Monitor. He added that the SDC will only demand semi-autonomous administration of the Kurdish areas, similar to a previous Damascus proposal granting the Kurds “an expanded local administration.”

Regarding the SDF’s future, the Kurdish researcher said the Syrian government will probably depend on the Kurdish fighters to maintain local security in northern Syria by enlisting them within the regular forces.