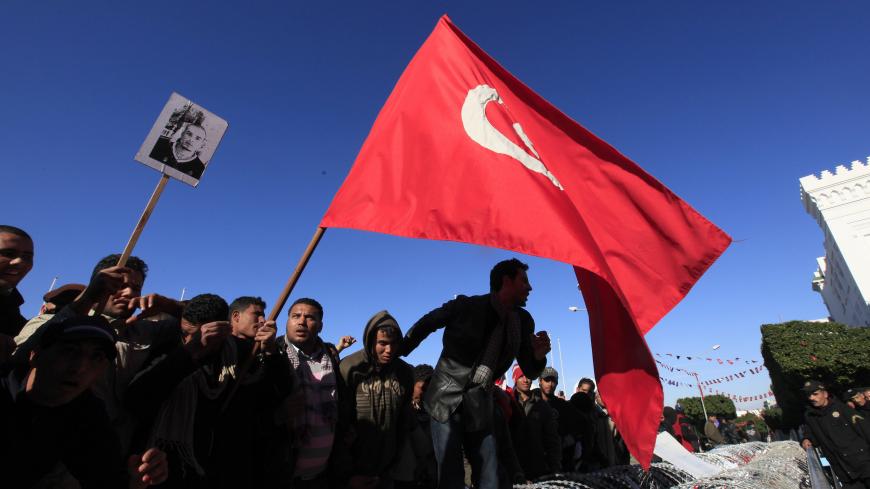 A few weeks after France’s les Gilets Jaunes (Yellow Vests) movement took to the streets in November to protest rising fuel costs, the high cost of living and taxes on the middle and lower class, something similar happened in Tunisia. A call for protest went out on Facebook, inspired by the French but with a subtle difference: They called themselves les Gilets Rouges (Red Vests).

Les Gilets Rouges are slowly gaining traction online, amassing several thousand followers since Dec. 9, but the group is still in its infancy. “It’s not yet a movement, and we don’t know really where it’s coming from,” Massaoud Romdhani, head of the Tunisian Forum for Economic and Social Rights, told Al-Monitor.

On Dec. 14, the group held a press conference to address questions and take their place in Tunisia’s social sphere. They laid out 22 socio-economic demands to address problems faced across the country. The group is also in the process of setting up 53 local coordination offices and nine regional ones.

Les Gilets Rouges is intended to represent poor and marginalized Tunisians, according to campaign founder Riyad Jrad. Its economic and social demands include an increase in the country’s minimum wage, urgent reforms in the education, infrastructure, health and transport sectors, improved living standards and more job opportunities.

The group is coordinating protests across Tunisia. The first one is planned for today — Dec. 17, the same date that Mohammed Bouazizi self-immolated in Sidi Bouzid in 2010, prompting a wave of protests across the region — in Kasserine. While some protests in France have turned violent, Jrad was quick to clarify, “Almost all of these planned movements will take place in full respect of the norms of civilized and peaceful demonstrations and the standards of the rights of expression.”

Les Gilets Rouges have cleverly capitalized on the popularity and traction of France’s Gilets Jaunes, but they follow a recent history of socio-economic protests in Tunisia and a growing sense of anger and discontent over the country’s economic situation. In November alone, there were nearly 750 protests across the country. Teachers staged protests salary cuts and the Tunisian Order of Lawyers protested a proposed finance law they claimed violates client-attorney privilege. The country’s powerful General Labor Union (UGTT), whose members account for nearly 5% of the Tunisian population, has announced a general strike on Jan. 17 — the first since the February 2013 strike after the assassination of well-known human rights lawyer Chokri Belaid.

While Tunisia has made several important democratic gains since the 2011 revolution, the country’s economic situation seems to have moved in the opposite direction. “The demands of the revolution are not felt by the people on the ground — to the contrary, the situation is getting worse. The middle class is falling into poverty and the youth aren’t finding jobs. You are three times more likely to be unemployed with a diploma,” said Romdhani.

While Tunisia’s economy grew by 2.6% in the first half of 2018 and the all-important tourism sector picked up slightly, structural problems of socio-economic inequality have persisted. Some issues like corruption, public debt and the concentration of wealth in the hands of only certain members of Tunisian society are remnants of dictator Zine El Abidine Ben Ali’s regime. In some regions, youth unemployment is as high as 36%. Inflation reached a three-decade high of 7.8% in June, the dinar has greatly depreciated and foreign currency reserves have dropped to record lows.

Part of Tunisia’s economic problem comes from outside the country. In 2016, the International Monetary Fund approved a four-year $2.9 billion loan to Tunisia to promote job creation and economic growth. Tunisia has been forced to comply with IMF pressure to further depreciate the dinar, shrink the public sector and end subsidies. In January of this year, the government announced austerity measures as part of the 2018 budget that appeased its international creditors and not the country’s most vulnerable groups. Mass protests erupted and over 800 people were arrested. In the ensuing months, the situation has not improved for the lower or middle classes despite government pledges.

“The government doesn’t know whether to satisfy the international or European agencies, or the local UGTT and the youth asking for work,” explained Romdhani, adding, “We are at a crossroads.”

And while Tunisia’s protest movements are indicative of some of the healthier gains of the revolution — namely freedom of speech and movement — even those victories seem to have gone out the window. One of the founders of les Gilets Rouges was arrested and in an even more bizarre twist, the police seized a cache of 50,000 yellow and red vests at a warehouse in the city of Sfax. After Tunisia’s protests against Saudi Crown Prince Mohammed bin Salman, unique in the region, it’s disheartening to see the country follow in the footsteps of neighboring Egypt, where officials have banned the sale of reflective jackets in both red and yellow.