A group of young Tunisian civil society activists established the Red Vest campaign in protest against the worsening economic and social situation in Tunisia. 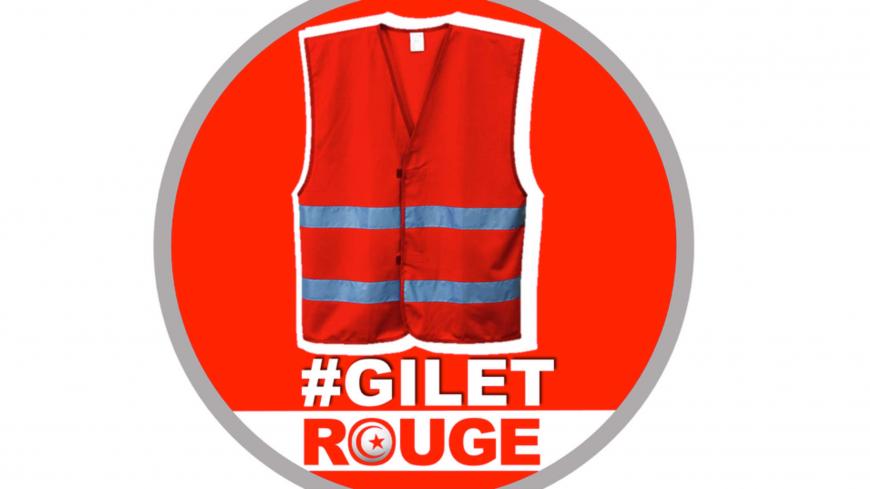 The logo of the Tunisian Gilet Rouge movement, seen in an image uploaded Dec. 11, 2018. - Facebook/Gilet Rouge

A group of young Tunisian civil society activists announced Dec. 8 that they are planning to take to the streets in protest against what they call the government's failure to manage the economic and social crises. They launched a campaign on Facebook titled “Gilet Rouge” (French for "Red Vest") and said they are working on opening coordination offices across Tunisia.

Riad Jarad, the general coordinator of the campaign, told Al-Monitor that the Red Vest campaign is an independent youth movement that is open to all Tunisians regardless of their political or intellectual affiliations.

He said that the color red has been adopted instead of yellow, which is used in France, because the economic situation in Tunisia has hit dangerous levels. He noted that 51 coordination offices would be opened across Tunisia this week in a bid to organize protests and avert any chaotic scenarios.

An online Yellow Vest campaign was launched by French protesters in May to protest the increase in fuel taxes. After the campaign in December turned into bloody confrontations between French security forces and protesters in Paris, President Emmanuel Macron announced in a speech Dec. 10 that he would back down on the tax increase starting in 2019.

Jarad pointed out that the Tunisian campaign aims at holding to account both the government of Youssef Chahed and the Ennahda movement, which is one of the most prominent parties participating in the government. The protests, he added, are against the economic situation in the country and the high unemployment rate, which reached 15.5% in 2018.

Meanwhile, the Tunisian General Labor Union (UGTT), the largest trade union in the country, announced Dec. 12 a general strike in the public sector on Jan. 17, 2019, to protest the failure of negotiations with the government for wage increases.

UGTT Assistant Secretary-General Bu Ali Mubaraki told Al-Monitor that the UGTT supports any peaceful protests calling for better living conditions. He also stressed that the union would continue to insist on the need for a general strike, as long as the government is not responding to wage increase demands.

Mohsen Marzouq, the secretary-general of the Machrou Tounes party, which supports Chahed, warned during a meeting organized by the party Dec. 9 against “serious plans seeking to plunge the country into chaos and violence.”

Meanwhile, the Popular Front opposition party called in a statement Dec. 11 on its supporters to take to the streets and protest the government’s performance.

Ammar Omrousiya, member of parliament for the Popular Front, told Al-Monitor, “The front has started mobilizing protesters against the 2019 budget law, which the parliament approved Dec. 10. Demonstrators will also protest the systematic impoverishment policies that the Tunisian people are going through for the sake of lobbyists and businessmen.”

The budget law has sparked controversy in Tunisia as some of its chapters were deemed biased to businessmen and lobbyists close to Chahed. Under the law, owners of big businesses will be allowed to pay the 35% tax on profit in 2020, instead of 2019.

Minister of Trade Omar al-Bahi said in statements Dec. 12 that the decision aims at protecting the purchasing power of citizens, since such a tax could lead to higher prices.

Omrousiya said the front supports any peaceful youth protests staged within the framework of a large and organized civil movement that includes the largest possible number of Tunisians.

Economic expert Sadok Jabnoun warned against the tension prevailing in the country as a result of the deteriorating purchasing power and the declining economic indicators. The trade deficit reached 17.3 billion dinars ($5.9 billion) in November, amid the ongoing devaluation of the local currency against foreign currencies.

Jabnoun noted that the ongoing devaluation of the Tunisian dinar fell short of having any positive impact on Tunisian exports due to the lack of developed local industries in Tunisia. The country, he said, relies on agricultural and textile returns but the textile industry is facing Turkish and East Asian competition.

A Dec. 10 statement by the Board of Directors of the Central Bank of Tunisia voiced concerns over the continued expansion of the trade deficit, which exceeded 16 billion Tunisian dinars ($5.4 billion) during the first 10 months of 2018. In the same context, the statement expressed concerns over the banks’ growing need for liquidity.

As youth movements, organizations and opposition parties mobilize protesters against the cost of living and the policies adopted by the government, pro-government parties warn against an explosion that would plunge the country into chaos, in the context of a power struggle between Tunisian President Beji Caid Essebsi and his rival Chahed.