Despite Turkey's threats to attack the US-allied Kurdish militia in Syria, there is little evidence that Washington would let Ankara move into the Syrian Kurdish area under its protection. 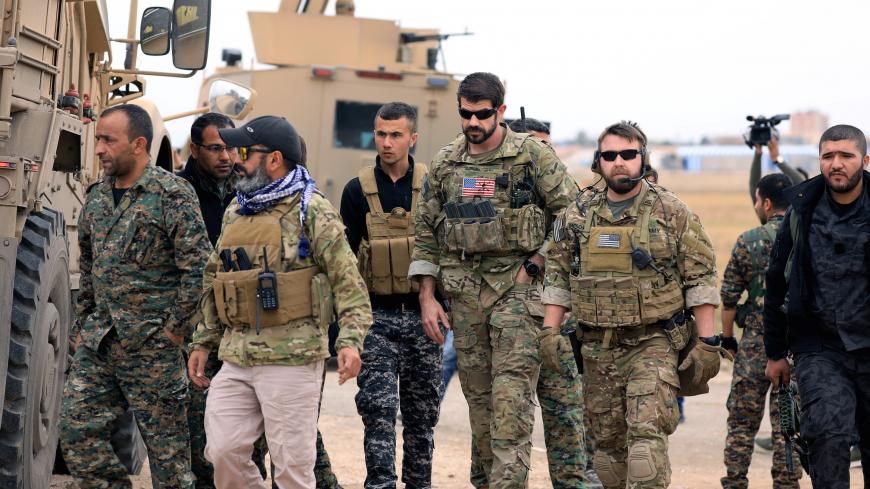 Syrian Democratic Forces and US troops are seen during a patrol near Turkish border in Hasakah, Syria, Nov. 4, 2018. - REUTERS/Rodi Said

Will Turkey’s President Recep Tayyip Erdogan follow through with threats to send Turkish troops against the United States’ Kurdish allies in Syria? The question has grown ever more pressing since the Pentagon’s swift and stern response to Erdogan’s vow yesterday to “start the operation to clear the east of the Euphrates from separatist terrorists in a few days.” Although Erdogan emphasized that a Turkish incursion would not target US military personnel in any way, it remains unclear how the US would respond if Turkey waded in, raising the specter of confrontation between the NATO allies.

The Pentagon responded soon after Erdogan made his comments. “Unilateral military action into northeast Syria by any party, particularly as US personnel may be present or in the vicinity, is of grave concern,” said Pentagon spokesman Commander Sean Robertson. “We would find any such actions unacceptable.” He warned of giving the Islamic State breathing space in an apparent reference to Turkey’s operation in January against the Syrian Kurdish People’s Protection Units (YPG) in Afrin.

The Turkish incursion prompted many YPG fighters to abandon the US-led coalition’s campaign against IS in the Euphrates Valley and take up arms against Turkey and its opposition rebel allies. In October, the YPG briefly paused operations again when Turkish forces mounted artillery attacks against the YPG in Kobani. The complication has undermined the coalition’s bid to conclusively defeat IS.

Today a spokesman for the National Army, a Turkish-backed Syrian rebel force in northwest Syria, claimed up to 15,000 fighters were ready to join Turkish forces against the YPG but that no date had been set. Maj. Youssef Hamoud told Reuters, “The battle will be launched simultaneously from several fronts. It will be in Manbij and Tell Abyad and Ras al-Ain.”

A Western reporter on the ground in northern Syria said there is currently no evidence of Turkish offensive military activity along the border. Wladimir van Wilgenburg, a freelance journalist and researcher who toured the road running the length of Turkey’s border with YPG controlled territory today, including Ras al-Ain, told Al-Monitor, “I checked the walls from all sides, there is nothing.” Van Wilgenburg was responding to claims that Turkish forces had dismantled parts of a 764-kilometer (475-mile) “security wall” that it completed this summer. Removing blocks would ostensibly facilitate an incursion.

An official for the Syrian Democratic Forces (SDF), the YPG-dominated umbrella group for Kurdish and Arab militias fighting IS, said that Turkey’s threats needed to be taken seriously despite some analysts' view that they had more to do with Erdogan's attempts to corral nationalist votes ahead of nationwide municipal elections in March. The official, speaking on condition of anonymity, told Al-Monitor in a telephone interview, “Each time Erdogan said he would attack us, he has. It would take the Turks a few minutes to remove chunks of the wall. If they want to come in they can. The question is, will the United States let them?”

Like many, the official reckoned Turkey’s initial target may well be the Arab-dominated town of Tell Abyad. Before it fell to the YPG in 2015, the town served as the main gateway for jihadis making their way via Turkey to join the ranks of IS. Tell Abyad offers the shortest path to Raqqa, which served as the capital of their “caliphate” until it too was seized in September 2017. Control of Tell Abyad would drive another wedge between Kurdish-run areas, as did Turkey’s Euphrates Shield invasion in August 2016. This, together with January’s Operation Olive Branch, torpedoed the Kurds’ long running attempts to carve out an uninterrupted chunk of territory from the Iraqi border all the way to Afrin. The official insisted, however, that unlike in Afrin, where the YPG withdrew to avert civilian casualties, "this time the YPG will fight back."

Turkey has long wanted the United States to boot the YPG out of Arab-majority territory and allow it to muscle its way in with its own Kurdish and Sunni Arab protégés. Erdogan made this clear during the summit on national defense where he delivered his threats against the YPG, saying, “Although 80% of the region belongs to Arabs, terrorists groups rule there. We will do what we have to do.”

The SDF official speculated that Turkey and the United States might have struck “a secret deal” for Tell Abyad despite the Pentagon’s public disavowals of Turkish threats.

There is little evidence, so far, that the United States would let Turkey move into the Syrian Kurdish area under its protection. To the contrary, it has begun erecting observation posts along the Turkish border in order to hold the Turkish army at bay.

Michael Stephens, a research fellow at the London-based Royal United Services Institute for Defense and Security Studies, dismisses the notion that Turkey can act without the United States’ blessings. He told Al-Monitor via email, “Turkey will not be able to launch any type of operation in SDF controlled Syria without US permission, or unless the US decides to vacate the area.” He continued, “Particularly at a time in which the SDF operation against IS have slowed, and are coming under some pressure, it is highly unlikely the US would accept a Turkish operation in Syria at any time in the near future.”

Others argue that Turkey may judge this moment to bully Washington into submission as particularly opportune. In any case, none of it should come as a surprise. Asli Aydintasbas, a senior fellow for the European Council on Foreign Relations, contended that Turkey had made its intentions known in private meetings with US officials “for some time.” Aydintasbas told Al-Monitor, “Turkey has seen the Americans talk tough before but then failing to commit to the SDF either politically or militarily or pushing back when matters come to a head.”

US attempts to appease Turkey with the “temporary and transactional formula memorized by US officials to characterize relations with the YPG” have further muddied the waters. The “half-baked deal” over Manbij, the mainly Arab town where the United States has yet to fulfill pledges to remove all YPG elements from military and administrative structures, has deepened Turkish distrust. Aydintasbas concluded, “If Turkey does mount another offensive I am not sure the United States will react any differently this time."