Will Iran ask Hamas to ignite Gaza front in support of Hezbollah?

The recent Israeli operation to expose Hezbollah’s tunnels on the Lebanese border raised questions about Iran-backed Hamas’ exposure should Tehran request it to open a second front against Israel in the event of an Israeli-Hezbollah confrontation. 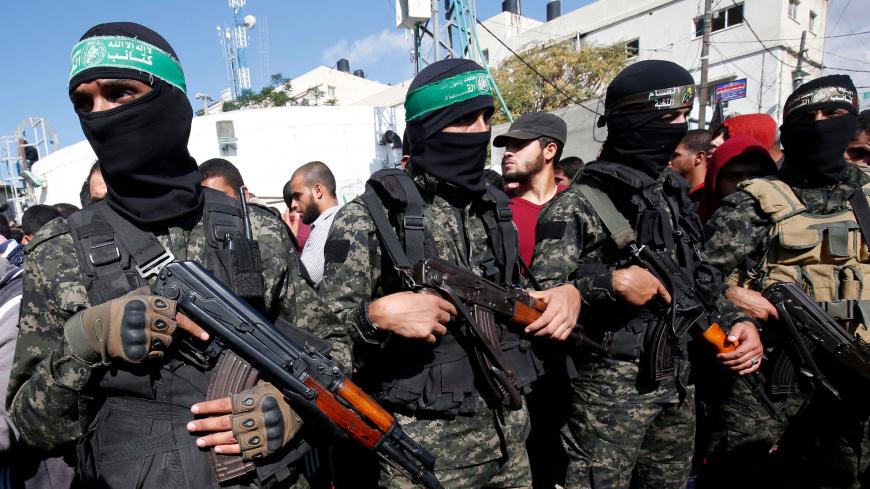 For a brief moment earlier this month, the possibility of a regional confrontation engaging Israel on two fronts appeared to increase, when Israel launched Operation Northern Shield, an open-ended action to destroy Hezbollah tunnels from Lebanon into northern Israel. “[We are] operating decisively and responsibly on all fronts simultaneously … [against] any party that “tries to harm the State of Israel,” said Israeli Prime Minister Benjamin Netanyahu hours after announcing the operation on Dec. 4. The Israeli army moved artillery to the north and called up reserves, heightening the atmosphere of uncertainty.

In response to the Israeli's action, Hassan Hobballah, a member of Hezbollah’s political bureau in charge of the Palestinian dossier, said, “Hezbollah is monitoring the Israeli movements on all fronts. We are an integrated chain, and we cannot separate Gaza from Lebanon. Our enemy is one regardless of the number of fronts involved. We will not let one front face Israel alone.” Meanwhile, Islamic Jihad spokesman Musab al-Barim remarked, “The Palestinian resistance is taking the situation on the Lebanese border very seriously. It is carefully considering the strategic position and will not give up its role in the field.”

A week after the start of the operation, the Israeli army said on Dec. 10 that it still had not ruled out the possibility that the operation to destroy Hezbollah’s tunnels might require entering Lebanese territory. The following day, Netanyahu visited the border with Lebanon. “There is great firepower here,” he said, in reference to Hezbollah. “We are prepared for it from all directions.” Some analysts took “all directions” to suggest the possibility of a military escalation in Gaza or Syria in support of Hezbollah should conflict erupt between the Lebanese group and Israel.

Theoretically, with Iran being the main supporter of Hamas, Islamic Jihad and Hezbollah, Tehran could decide to launch simultaneous battles on Israel's Gaza and Lebanon fronts, which would pose a challenge to the Palestinian organizations, requiring them to either acquiesce to or reject the Iranian request. The statements out of Gaza and Beirut after the launch of Israel's tunnel operation raised questions about whether Hamas and other Palestinian factions would indeed engage.

Yousef Sharkawi, a military expert from the West Bank and a retired military commander for the Palestine Liberation Organization, told Al-Monitor, “The participation of the Palestinian resistance, namely Hamas and the Islamic Jihad, alongside Hezbollah is necessary to achieve a front unification policy against Israel. Hezbollah should have supported Gaza in the wars between 2008 and 2014, but it missed this opportunity.”

Sharkawi added, “The forces targeted by Israel need to take action all at once and rain rockets from all fronts. While this would serve mutual interests, it would also have moral and national implications, because once Israel is done with Hezbollah, it would certainly move on to Gaza.”

The Lebanese Forces, an opponent of Hezbollah in Lebanon, assessed on its website on Dec. 4 that Israel was on its guard, and that if the situation involving Hezbollah exploded in southern Lebanon, Iran might open the Gaza front against Israel to move the confrontation into the regional realm.

Amos Yadlin, former head of Israeli Military Intelligence, said that Iran had an interest in escalating the situation by exploiting Operation Northern Shield. According to him, Iran could push for a confrontation between Hezbollah and Israel, which would necessitate regional and international involvement and agreement, which Tehran would hope to use to ease the pressure of US sanctions against it. Eli Ben-Meir, former head of the research department for Israeli Military Intelligence, also said that he expected Iran to exploit the situation by pushing its allies into working against Israel.

On Dec. 5, former Israeli Defense Minister Avigdor Liberman, expressing his ongoing dissatisfaction about Israel agreeing to a cease-fire with Hamas on Nov. 14 after hostilities in Gaza, said that Israel was capable of simultaneously handling conflicts on its northern and southern fronts.

The military confrontation between Hamas and Israel Nov. 12-13 was the most violent episode between the two parties since the 2014 Gaza war and had raised tensions even before Israel's tunnel operation in the north. The confrontation had broken out when Hamas fighters clashed with Israeli forces that had infiltrated at Khan Yunis on Nov. 11, leaving seven Hamas members and an Israeli officer dead. Israel went on to strike 150 sites in Gaza, while Hamas and other Palestinian factions fired more than 400 rockets into southern Israel.

Khalid Qaddumi, Hamas' representative in Iran, told Al-Monitor by phone, “The resistance front stands united today to confront Israel. We are not advocates of war, but Israel must know that our response to any action taken against us will be painful and comprehensive. The international community needs to put a stop to [Israel’s] attempts to meddle with regional security, as this could possibly lead to an all-inclusive, all-scorching implosion.”

The United States added its two cents with Jason Greenblatt, presidential envoy for the peace process, urging Iran and its proxies to stop their provocations against Israel. Meanwhile, national security adviser John Bolton called on Iran and its agents to stop their regional provocation posing a threat to Israeli security. US National Intelligence Director Dan Coats arrived in Cairo on Dec. 5 on an unannounced visit and asked his Egyptian counterpart, Abbas Kamel, to persuade Hamas not to interfere in any Israeli war against Hezbollah.

Qassem Qassir, a Lebanese author close to Hezbollah who often writes for London-based Arabi21, told Al-Monitor, “The Palestinian and Lebanese resistance have deep-rooted ties. The Palestinians’ involvement in any Israeli war against Hezbollah is linked to two conditions — namely, geographic penetration and how much time the Israeli operation in Lebanon could take.” In short, he believes the Palestinians would enter a war alongside Hezbollah against Israel if the Israelis crossed into Lebanon, Hezbollah responded and the confrontation dragged on for weeks.

Unsurprisingly, Iranian foreign affairs representatives have since mid-November issued various statements of support for Hamas, including defending it at the United Nations against US-sponsored condemnation for firing rockets at Israel, as well as accolades, including that Hamas has created hope for Arabs and Muslims to undermine Western projects for domination in the Arab world. Tehran also announced that it would provide financial support for the families of the Palestinians killed and for those wounded in the Great Return March on Gaza's border with Israel. It remains unclear whether such gestures will be enough to entice Hamas to stick its neck out for the sake of front unification.