Prime Minister Benjamin Netanyahu's announcement that he aspires to maintain his current coalition after the April elections means that Israelis can expect to see ideas like annexation and a binational state increasingly normalized. 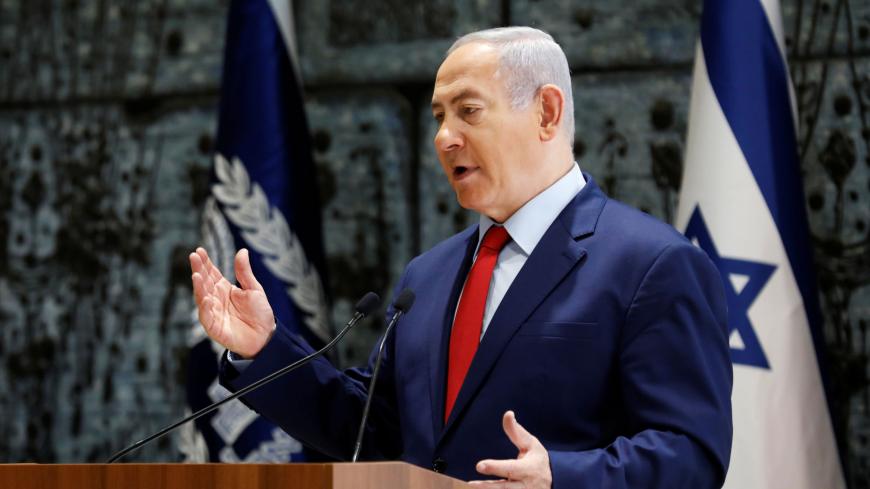 Israeli Prime Minister Benjamin Netanyahu speaks during a ceremony in which Amir Yaron is sworn in as Bank of Israel governor, Jerusalem, Dec. 24, 2018. - REUTERS/Amir Cohen

For now, the public debate surrounding Israel’s April 2019 election is focusing on Prime Minister Benjamin Netanyahu’s criminal cases. The Israeli media as well as politicians from the coalition and opposition have been spending quite a bit of time on the question of when it would be appropriate for Attorney General Avichai Mandelblit to release his decision on whether to indict Netanyahu. Should he do it now, or wait until the election is over? Can Netanyahu serve as prime minister if he is indicted? But the question that will really determine Israel’s fate is whether Israel should annex the territories, and that issue is being pushed off to the side.

During the Netanyahu government’s last term, the leaders of HaBayit HaYehudi made no secret of what they considered to be an appropriate diplomatic solution to the conflict with the Palestinians. It involved the annexation of Area C, which was home to 413,000 Jews as of last year and about 300,000 Palestinians. In fact, the party’s chairman, Education Minister Naftali Bennett, had submitted his own annexation plan in 2012. Back then, he sounded delusional. Adopting the idea meant abandoning a diplomatic solution with the Palestinians and replacing it with the idea of a binational state. The issues never received public support or even came up for public debate. But now, during Netanyahu’s fourth term, Israelis are desperate. It may be Netanyahu’s fault, but they have given up on reaching a diplomatic solution with a “non-partner” like Palestinian President Mahmoud Abbas. As such, the right’s annexation plan has taken the lead over a two-state solution.

Netanyahu is fully aware of how volatile the idea of annexation is and takes care not to explicitly or publicly support it. Nevertheless, words are one thing and actions are another. The fact is that he has taken steps to advance a policy of annexation. Outwardly, in diplomatic meetings with world leaders, Netanyahu continues to say that he supports a two-state solution. He even says it to his good friend in the White House, President Donald Trump. And in a speech to the Knesset in 2016, Netanyahu spoke out clearly against annexation: “My worldview hasn’t changed. I am not interested in a binational state. I do not want to turn a million and a half Palestinians into Israeli citizens.”

On the other hand, Netanyahu has taken steps to kill any possibility of a two-state solution, particularly during his last two terms. He scared the Israeli public into believing that the West Bank would become a terror base. He claimed that Abbas has been inciting people to engage in terrorism and is not a real partner, even though senior defense officials believe that he is a partner for dialogue between Israel and the Palestinians on matters of defense. These officials rely on steady security coordination with the Palestinian Authority and the joint war against terror.

Nevertheless, in its most recent term, for example, the Netanyahu government took steps to legalize construction in the territories. In February 2017, for instance, the Knesset approved the Regularization Law in its third reading. It was intended to legalize construction in settlements built on privately owned Palestinian land. On Dec. 16, shortly before the current Knesset was dissolved, the Ministerial Committee on Legislation approved a similar law proposed by Knesset member Betzalel Smotrich (HaBayit HaYehudi) and intended to formalize the status of outposts in the territories and remove obstacles that would hinder future annexation. While the attorney general claimed that he could not defend this law's constitutionality, it made no difference to the current government. Netanyahu seems to have locked away his past declarations about preserving the chance to reach a diplomatic solution and was dragged by HaBayit HaYehudi into passing laws that effectively mean annexation. By now, he no longer dares to dismiss calls for annexation by Bennett, Smotrich and their fellow lawmakers.

The outgoing Netanyahu government did not prioritize the strengthening of existing settlements but rather enabled the establishment of new outposts. It did not grant construction permits to meet the needs of “natural growth” but with the goal of significantly increasing the number of West Bank settlers. Now, in the shadow of the Regularization Law, new outposts pop out of nowhere, like the one established last August next to the settlement of Eli or another established last year east of Ramallah. These outposts will certainly receive government support and eventually become full-fledged settlements.

Netanyahu is not likely to change his spots if he is elected for another term. At a meeting of the Likud Knesset faction on Dec. 24, he said, “For me, the current coalition is the core of the next coalition.”

Meanwhile, HaBayit HaYehudi split Dec. 29. Bennett and Minister of Justice Ayelet Shaked announced that night the formation of a new right-wing party: The New Right. Obviously, neither this new party nor HaBayit HaYehudi are expected to give up on the annexation plan. On the contrary. These two right-wing parties will battle over the far-right electorate, each claiming to be at the root of the annexation idea. Netanyahu will be forced to take that into account when attempting to compose a new coalition (if he wins the elections). Without these parties, Netanyahu will have a hard time putting together a government. And this means that he will not be able to ignore the Area C annexation plan.

As a reminder, in the 2015 election campaign, the chairman of Kulanu, Moshe Kahlon, announced that he would be the next finance minister, while Avigdor Liberman boasted that he would be defense minister. Both eventually got the jobs that they wanted. Now it is not clear whether Liberman will return to the Defense Ministry after the election, not only because he resigned from it, but because Bennett has been eyeing the position for himself. HaBayit HaYehudi set as a goal in the last elections to change the composition of the Supreme Court, which the party believes was hindering the settlement enterprise. And Shaked indeed succeeded in changing Israel’s court system. Now, Bennett and Shaked well know how to force the next coalition’s hand with declarations on security and annexation.

Israel will elect the 21st Knesset in less than 100 days. While retired generals are creating new parties and the Israeli left is splintering, the right — whether united or spilt — already has a fully formulated ideology.

Now, the Israeli right has put annexation openly on the table. This crazy idea is becoming a reality, and Netanyahu will not be able to ignore it anymore. He will, therefore, stay true to form and abandon the idea of a two-state solution, solely for the sake of his personal and political survival.

Israeli voters will not be voting on Netanyahu's criminal file, on the war with Syria and Hezbollah, on the flow of Qatari money to the Gaza Strip or on plans for an arrangement with Hamas. This time, Israelis will be voting on whether they want a binational state and whether to annex Area C.