The White House accused Prime Minister Benjamin Netanyahu of lying, after he declared during a closed party meeting that he was discussing annexation plans with the American administration. 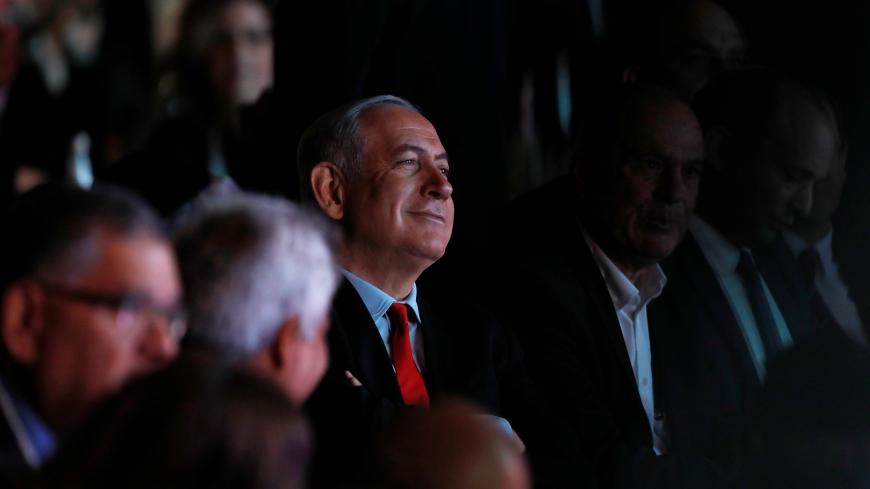 Israeli Prime Minister Benjamin Netanyahu sits in the audience ahead of a planned address at the Muni World 2018 conference in Tel Aviv, Israel, Feb. 14, 2018. - REUTERS/Nir Elias

Much like every week, when Prime Minister Benjamin Netanyahu walked into the Likud faction’s room in the Knesset on Feb. 12, a group of party activists was waiting for him there. It is, after all, a matter of routine. This time, however, the prime minister made a point of spending more time with each and every one of them than he usually does. It was right before the Israeli Police released its recommendations regarding investigations into his affairs, so it was especially important that Netanyahu get a boost of support from within his own party.

Just a few moments later, journalists and photographers were asked to leave the room. Then the prime minister surprised the members of his faction by telling them that he had been in contact with the US administration over Israel’s annexation of parts of the West Bank. “On the subject of applying sovereignty, I can say that I have been talking to the Americans about it for some time,” Netanyahu said reportedly, sharing the momentous news. He then explained that the entire move must be conducted in coordination with the Americans, because “our relationship with them is a strategic asset for the State of Israel, but also for the settlement enterprise.”

Netanyahu’s remarks to his faction were intended to explain why he had blocked proposed annexation legislation made by Knesset members Yoav Kisch of Likud and Bezalel Smotrich of HaBayit HaYehudi, which were scheduled for discussion by the Ministerial Committee for Legislation just a day earlier.

While these proposals were more in the spirit of the Likud Central Committee’s unanimous vote on Dec. 31, 2017, to annex West Bank lands, Netanyahu immediately realized that this was actually a hot potato for an otherwise supportive US administration. He realized that the United States considers annexation to be a red line and decided to hinder the bills. In fact, the prime minister and his staff applied pressure on Kisch to remove his proposal from the agenda, and Netanyahu even discussed the matter with Chairman of HaBayit HaYehudi Naftali Bennett, whose party platform includes annexation as a central pillar. Eventually, the proposals were blocked, with Netanyahu explaining to his faction that a historic move like annexation cannot be based on private legislation. Rather, he insisted, it can only be based on a government initiative.

The problem was that Netanyahu’s remarks, which were intended for a very specific audience, quickly found their way out of the conference room and to the various news sites. This resulted in an embarrassing incident between the Israeli government and the White House. Netanyahu was accused of lying, and he was eventually forced to walk back his remarks. The prime minister takes great pride in his diplomatic achievements when dealing with the Trump administration, and he did not expect that American pushback would be so intense. As far as he was concerned, it was more reminiscent of the reactions he usually received from the Barack Obama administration.

First, the White House demanded a clarification from Netanyahu’s office, saying that such discussions had never taken place. At this point, Netanyahu believed that he could contain the incident by issuing a noncommittal clarification. So a “senior Israeli official” in the prime minister’s inner circle released a statement that Netanyahu had long been talking with the US administration about Israel’s national interests in the context of some future peace agreement, but did not present the United States with any specific annexation proposals, and in any event, the United States did not express its support for these proposals. The statement went on to say that Israel had updated the United States about the various proposals being raised in the Knesset, and the United States responded unequivocally that it wants to advance President Donald Trump’s own peace plan.

But that was not enough for the Americans. Soon after, the White House spokesman released a statement denying Netanyahu’s claims, effectively saying that Netanyahu was lying. “Reports that the United States discussed with Israel an annexation plan for the West Bank are false," the spokesman said. "The president's focus remains squarely on his Israeli-Palestinian peace initiative.”

At this point, Netanyahu realized that the incident had spun out of control, so his office released the following statement: “Prime Minister Benjamin Netanyahu updated the Americans on the initiatives brought up in the Knesset, and the Americans expressed their unequivocal position by which they are committed to advancing President Trump's peace plan.”

The Israeli opposition was quick to take advantage of Netanyahu’s humiliation by celebrating the slap across the face he just received from his “good friend.” But within a day, the entire incident had died down, and the Americans announced that it was closed, as far as they were concerned.

So what caused the prime minister of Israel to get into trouble with such a statement, knowing full well how problematic it would be for the Trump administration? After all, it was Netanyahu himself who blocked the advancement of the Annexation law in the Knesset, so as not to upset the Americans. It looks as if Netanyahu grew more confident after Trump was elected, especially in the past few months following the United States' historic recognition Dec. 6 of Jerusalem as the capital of Israel and Trump’s declaration that he will move the US Embassy to Jerusalem. In fact, Netanyahu grew so confident that he forgot how mercurial the president really is or how no one fully understands him.

In fact, Netanyahu said as much to the right in the first few months after Trump’s election. In February 2017, he told his Cabinet, “Trump is an improvement, but we must still avoid tugging at the rope too hard.” This came in response to those ministers pressuring Netanyahu to take back his support for a two-state solution. At the time, Netanyahu even expressed concern about a potential clash with the new president and told his ministers to act wisely, explaining, “We must take his personality into account.”

It looks like Netanyahu believed that a sympathetic administration in the White House would show understanding. After all, his remarks were made behind closed doors to his own party, with the sole intent of bolstering his coalition. Still, it was a big mistake. He ended up humiliated and was forced to walk back what he said while the entire world watched. As soon as the commotion dies down, the Annexation law will likely be put in “deep freeze” now that it has officially become a bone of contention with an otherwise supportive US administration.

The same is true of Bennett, who had his own annexation plan. He now understands what the impact would be if he were to advance such a law. He would be opening a new front against the very president who was recently responsible for some of the right’s most historic political achievements.