US President Donald Trump has signed legislation calling for greater support for religious minorities victimized by the Islamic State. 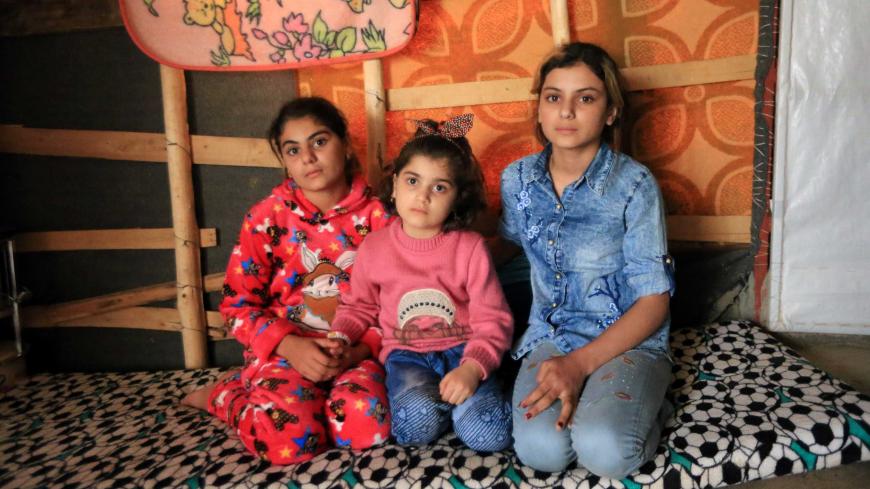 Yazidi girls Bushra, 12, Suhayla, 7, and Rosa, 13, who were reunited with their family after being enslaved by Islamic State militants, pose for a photo at Sharya Camp in Dahuk, Iraq, Dec. 18, 2017. - REUTERS/Ari Jalal

A new US law designed to protect religious minorities and punish the Islamic State for its atrocities is getting a mixed reception from Iraqis, who are uncertain about how it will be applied on the ground.

President Donald Trump signed the Iraq and Syria Genocide Relief and Accountability Act into law Dec. 11. The law instructs the federal government to prioritize assistance for religious and ethnic minorities that have been targeted for "genocide, crimes against humanity or war crimes." It also makes available financial and technical assistance to nongovernmental organizations and other entities in Iraq to help conduct criminal investigations, develop local investigative skills and collect evidence.

Murad Ismael, the executive director of the Yazidi rights group Yazda, praised the Trump administration’s support for religious minorities as an “excellent principle.”

“The Yazidi community is pleased by how hope has traveled from the shores of the US to a small persecuted minority such as the Yazidis, who suffered harshly at the hands of ISIS [the Islamic State],” he told Al-Monitor.

Ismael, who is based in Texas, stood by President Trump as he signed the bill earlier this month. He said Yazda remains committed to restoring normal life and hope for Yazidis and all minorities four years after the genocide.

Likewise, Kamel Zumaya, the vice president of external relations at the pan-Christian Shlomo Organization for Documentation, hailed the passing of the law as the culmination of collective efforts by groups like the US-based Knights of Columbus, In Defense of Christians and the International Association of Genocide Scholars. He said Iraqis also played a key role.

“There have been efforts by high-profile Iraqi figures,” Zumaya told Al-Monitor. “People such as Bashar Warda, the archbishop of the Chaldean Church in Erbil, as well as political institutions representing Iraq’s Christians and human rights defenders who played a significant role in highlighting the suffering of the victims of the genocide, both on a local and international level.”

Zumaya stressed that the federal government in Baghdad and the semi-autonomous Kurdistan Regional Government should both now enact legislation to bring justice to the victims and help displaced people return to their hometowns.

Other groups, however, bristled at the new law’s focus on Yazidis and Christians. The act specifically highlights declarations by former secretaries of state John Kerry and Rex Tillerson that the Islamic State committed genocide against Yazidis, Christians and Shiite Muslims, and calls for special attention to groups “whom the Secretary of State has determined ISIS has committed genocide.”

US-based Mandaean activist Nazar al-Haidar, for example, told Al-Monitor that his gnostic community is not explicitly covered by the law.

“Ninety percent of the Mandaean minorities have fled Iraq because of the same dangers and threats that haunted the Christians and Yazidis,” said Haidar, who serves as the deputy director of the Council of Iraqi Minorities. “Christians, Yazidis and Mandaeans were all the same to [the Islamic State]. Those three minorities were simply firewood kindling the Sunni-Shiite conflict.”

Haidar added that the lack of international lobbies representing Mandaeans is not a reason to exclude them from the Iraqi cultural landscape. He expressed hope that US policymakers will take his community into account, considering that only 60,000 Mandaeans remain scattered across 20 countries worldwide, with 10% of them living in Iraq.

Others have expressed concerns about the law’s compatibility with UN policies addressing the challenges of Iraq’s religious minorities in light of President Trump’s unilateral policies. For example, the UN Security Council adopted a resolution September 2017 calling for the formation of an investigative team to support local efforts to hold the Islamic State to account by collecting and storing evidence of its crimes.

“It is imperative that this bill, as well as the projects related to and resulting from it, are not made a part of the international, regional, and local conflicts,” said Ali al-Bayati, a member of the Iraqi High Commission for Human Rights. “Otherwise, minorities will be, yet again, a victim of the international power struggle in the region, especially since the current US stance is to move away from the UN and take individual steps and decisions. This will not be in the best interests of countries and nations that are dealing with international and regional conflict, such as Iraq.”

The concern that minorities will once again become unwitting pawns in a multinational struggle for influence reflects the Iraqi government's inability to meet the needs of Iraqi minorities — the very reason representatives of those groups sought US help in the first place.

by Murielle KASPRZAK and Joseph SCHMID | AFP | May 26, 2022
END_OF_DOCUMENT_TOKEN_TO_BE_REPLACED