Iran's government has not officially reacted to Trump's announcement of a US withdrawal from Syria, but Iranian analysts have welcomed the news. 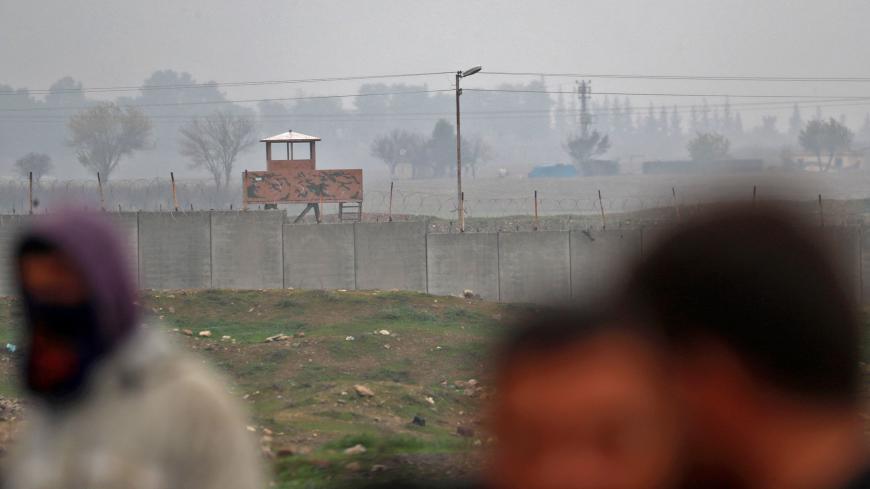 Turkish observation posts are seen on the Turkish side as Kurdish protesters gather near the border wall separating Turkey from Syria in the western Syrian countryside of Ras al-Ain, Dec. 20, 2018. - DELIL SOULEIMAN/AFP/Getty Images

The sudden announcement by President Donald Trump to withdraw 2,000 US troops from Syria has surprised leaders and analysts around the world. Trump, claiming that the Islamic State has been “defeated,” reportedly made the decision days after he spoke with Turkish President Recep Tayyip Erodgan. American politicians have criticized the move, which will leave US-backed Kurdish forces in Syria in limbo.

Iran has not yet officially reacted to the decision. Iran’s Foreign Ministry spokesman Bahram Ghassemi spoke today, but only to condemn Albania for expelling two Iranian diplomats. President Hassan Rouhani, who is in Turkey to meet with Erdogan to expand economic ties, did not address the exit of US troops from Syria, neither at the press conference nor in a joint statement. Rouhani’s only comment on Syria was: “Syria is important for us and it is important Syria be in the hands of the Syrian people. The territorial integrity of this country must be respected by everyone.”

Iranian analysts and commentators, however, were actively dissecting the news of the US withdrawal. Sadollah Zaeri, a conservative commentator and analyst, wrote in Fars News, “As far as volume, in comparison to others America has the fewest number of military troops in Syria and they are settled in eight headquarters in eastern Syria and mostly north of Raqqa.” He continued, “America does not have a strong footing in Syria, meaning they do not have an indigenous ally.”

Zaeri wrote that US troops in Syria are “threatened by numerous groups.” The Syrian army’s “determination to cleanse Aleppo makes their settlement more difficult and therefore it is in their interests to leave the dangerous climate of Syria.” Zaeri continued, “The exit of American troops from Syria has no impact on the military calculations of the country.”

Zaeri predicted that the US withdrawal will put Turkey in a more difficult position, because after the US exit they will be the only country to have troops in Syria illegally. Zaeri added that Turkey will also likely withdraw from Syria “in the following months.”

Other analysts and commentators were a little more celebratory regarding news of the US withdrawal. Mahdi Mohammadi, a conservative commenter and former media adviser to previous nuclear negotiator Saeed Jalili, tweeted, “Trump decision for a sudden withdrawal from Syria means America was not able to change the regional strategy of Iran nor able to break it.”

Other commentators recounted Supreme Leader Ayatollah Ali Khamenei’s speech in April, in which he responded to US calls demanding Iran pull back its influence in the region. During that speech, Khamenei said, “It is America who must leave Western Asia. It is America whose feet must be cut off from this region. We are from here. The Persian Gulf is our home. This is our home. You are the foreigners. You traveled here from a long distance.”

The managing director of Javan Newspaper, which is linked to the Islamic Revolutionary Guard Corps, tweeted, “Congratulations,” saying that first the Islamic State left Syria and now its masters. Farshad Mahdipour, founder of Sobhe No newspaper, tweeted that the withdrawal of US troops from Syria “is a victory for resistance forces but one must be careful of secret agreements between the US and Turkey.”