How Iran views the Russian withdrawal from Syria

Iranian media and analysts speculate on Russia's sudden decision to pull some of its troops from Syria and what this means for the fate of the cease-fire. 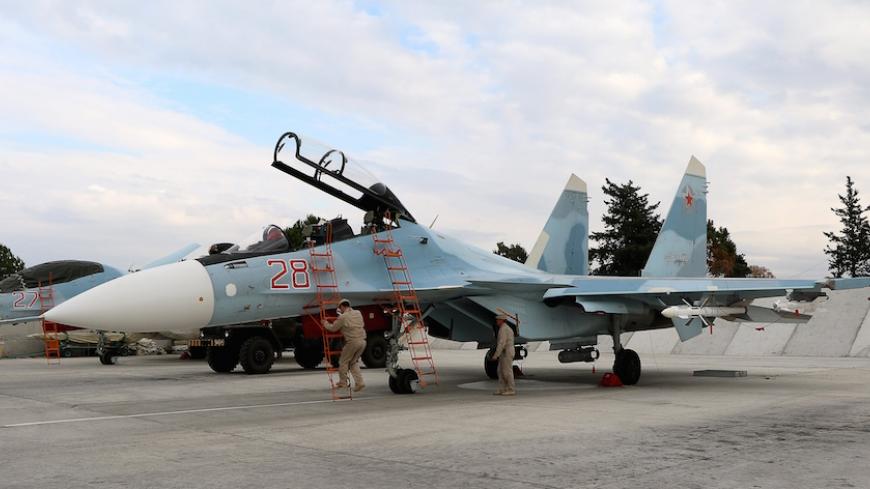 Russian servicemen prepare a Russian Sukhoi Su-30SM fighter jet before a departure for a mission at the Russian Hmeimim military base in Latakia province, in the northwest of Syria, on Dec. 16, 2015. - PAUL GYPTEAU/AFP/Getty Images

Iranian officials and analysts are speculating about why Russian President Vladimir Putin suddenly decided to begin withdrawing troops from Syria. Some wonder whether Russia won concessions from the United States and the Syrian opposition, but most seem to think that Russia's action is a positive sign, or at the least nothing to worry about.

Ali Akbar Velayati, foreign policy adviser to Iranian Supreme Leader Ayatollah Ali Khamenei, spoke to Iranian reporters March 15 after holding a press conference with Syrian Deputy Foreign Minister Faisal Mekdad in Iran. According to the media, Velayati said that during his meeting with Mekdad, they discussed “defending the territorial integrity” of Syria and its April 13 parliamentary elections. When asked if Iranian troops would replace the Russian forces leaving Syria, Velayati said that Russia's action “will not change the overall cooperation between Iran, Russia, Syria and allied forces such as Hezbollah.”

Velayati noted that Russia still has an air base in Syria and, if necessary, would again up its effort against terrorists. Velayati added that at the moment, the Syrian government has the upper hand given recent gains by its allies, the cease-fires and the Geneva negotiations. In addition to its air base, Russia will also reportedly keep its maritime base in Syria operable, and nearly 1,000 military personnel will remain in the country.

The Iranian website Entekhab published similar comments made March 15 by Syrian Information Minister Omran al-Zoubi on Syrian television. “As a result of the advancement of our armed forces in various areas of Syria, the suspension of conflict and the beginning of local cease-fires, Russia made this decision in complete cooperation and agreement with leaders of Russia and Syria,” Zoubi said. “No change has occurred in the political and military relationship between Russia and Syria.”

At a press conference in Australia the same day, Iranian Foreign Minister Mohammad Javad Zarif said the Russian withdrawal is a positive sign because it means Moscow may feel it no longer “needs to immediately resort to a military option to preserve the cease-fire.”

Mehdi Mohammadi, who was an adviser to the hard-line former nuclear negotiator Saeed Jalili, believes that due to the high probability of the cease-fires being extended, Russia decided to pull some troops from Syria because of the costs of provisioning operational forces. He added that there are enough troops to carry out attacks against terrorist groups when needed.

Mohammadi wrote in Tansim March 15 that Russia had informed both Damascus and Tehran of the details of the withdrawal. The main question, according to Mohammadi, is, “What concession has America and the opposition agreed to in exchange [for the Russian withdrawal]?” Mohammadi, without specifying to whom he might be referring, added, “Whatever it is, there is a great strategist standing behind these events.”

Regardless of Russia’s announcement, Iranian analysts and media believe this is not the end of Russia’s military involvement in Syria. Ramin Hossein-Abadian wrote for the Mehr News Agency, “Without a doubt, in the future, the Russian military air and sea support of Syria’s military … will continue.”

Iran’s support for Syria is also not in doubt. In a meeting with Mekdad March 15, parliament Speaker Ali Larijani said, “The future for the people of Syria is bright,” and added, “We are hopeful that the resistance front, standing with Syria, will bring about calm and security soon, and be certain that the Islamic Republic will always back them.”