Iran’s Cabinet has given the green light to the privatization of the popular Esteghlal and Persepolis soccer clubs, but from the debts to the losses, the process promises to be rocky at best. 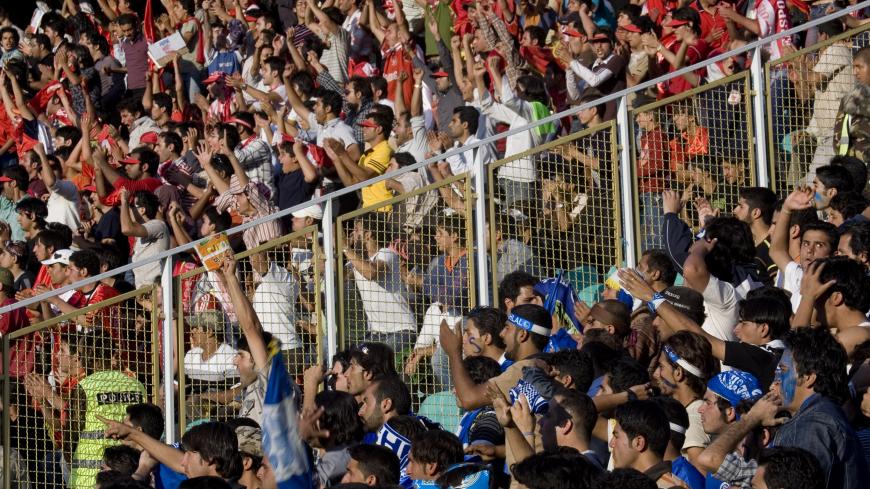 Esteghlal and Persepolis fans sit separately during their soccer match at the Azadi Stadium in Tehran, Oct. 14, 2007. - REUTERS/Morteza Nikoubazl

“Esteghlal or Persepolis?” and “blue or red?” are two questions tens of millions of Iranians have asked and answered over the years to determine which side they stand behind in a seemingly perennial rivalry between Iran’s two most popular soccer clubs. Now, the two may be sold to the private sector, as approved on Dec. 16 by a Cabinet meeting presided by President Hassan Rouhani. The decision signals a high-level political will to pave the way toward realizing the almost two-decade goal of freeing the two clubs from government control. However, many hurdles and uncertainties persist.

For one, transparency in disclosing the accounts and financial balances of the clubs is a major issue. The significant volumes of debt racked up by the clubs have become subject of much scrutiny.

Last year, reports put the total volume of Esteghlal’s debts at 1.18 trillion rials ($28.1 million), including tax liabilities and debts to individuals. For Persepolis, however, things were more complicated: The club owed $3.5 million to foreign individuals, which would translate into 133 billion rials with the then-exchange rate of the national currency at about 38,000 rials to the US dollar. After considering debts to Iranian individuals and steep tax, asset and insurance liabilities, the reds’ debts were estimated at around 2.11 trillion rials.

Since then, Perspolis has received a boost in the form of earnings from leveling up in the AFC Champions League tournament. Due to the Asian Football Club increasing the prize money for the 2018 club competitions, the fact that Perspolis ascended to the final match on Nov. 10 — but ultimately lost to Japan’s Kashima Antlers — meant that it was paid close to $3 million. The lowered value of the Iranian rial (then at 144,000 to the dollar, now at 103,000 on the open market) translated into a lucrative take for the club. That was on top of the roughly 30 billion rials that the club earned through selling finals tickets.

No clear picture of the two clubs’ debts is available at the moment. But the Cabinet’s green light, spurred by a push from Minister of Sports and Youth Affairs Masoud Soltanifar, shows that authorities have managed to tackle the debts at least to a degree that has given them confidence to move forward on the sensitive issue. On Dec. 13, days before the Cabinet approval, Soltanifar said “all of Esteghlal and Persepolis’ debts relating to real and legal persons have been cleared.” He said all hefty tax debts and fines, originating from 20 years of mismanagement, are being sorted, and also reassured that sponsors will support the clubs through the next three years based on their current contracts.

Then there is the issue of whether the clubs are actually turning a profit and therefore how viable purchasing them will be. There are opposing views on this, but on Dec. 18, head of the Iranian Privatization Organization (IPO) Mir Ali Ashraf Abdollah Pouri-Hosseini questioned the clubs’ current state. “Where have these two clubs gotten in these 40 years [since the 1979 Islamic Revolution]? Have they been profitable? With what hope should the private sector pay when there are no profits?” he said during a television interview.

“Experience has shown that privatization of Esteghlal and Persepolis never works out. They’ve been trying to do this for 18 years, but I really hope it works out this time,” a former high-level Iranian sports official told Al-Monitor on condition of anonymity.

He explained that proposals to privatize the clubs have gone many directions in those years, including endeavors to list the clubs in the Tehran Stock Exchange and the over-the-counter Fara Bourse. At least in their current loss-posting state, he said, the clubs cannot enter the capital market. “Any entity wishing to be listed in the capital market has to have its books in order and that is not happening here at all,” the former official said, suggesting that this may even be outright illegal based on Article 141 of Iran’s Business Act, which calls for reduction of a firm’s base capital if it is posting substantial losses.

Immediately after the Cabinet approved the clubs’ divestiture, IPO chief Pouri-Hosseini announced that the review and pricing procedures will be completed in less than two months, and shares will be offered before the current Iranian year is through in March 2019. He said the base price will be set at a rate “that will be accessible to fans and veterans of the two clubs.” This most likely means that big investors will be allowed to purchase majority shares with the rest offered to the general public. The public shares may be offered through forming a giant cooperative for each club, as proposed on Dec. 18 by Secretary-General of the Iran Chamber of Cooperatives Mashalah Azimi.

Arash Pourzakaria and Rouzbeh Amani, two millennial fans who have each fervently supported one of the clubs since an early age, say they will definitely consider contributing through buying shares if prices are right.

“Separating Esteghlal and Persepolis from the government will definitely be a good thing, since it will allow the clubs to do so many things they can’t or won’t do right now,” Pourzakaria told Al-Monitor. In time, he said, the two will be able to have their exclusive stadiums — they both use the Azadi Stadium at the moment — and be able to offer tours of their facilities and trainings, manage their fan clubs more efficiently and get better sponsors.

“We have the talent, but if our soccer is to progress and if we are to really start competing with regional teams like UAE’s Al Ain or Japan’s Kashima Antlers, there is no doubt that our clubs will need to be privatized,” Amani said. He pointed to the successful privatization of Tractor Sazi Tabriz in late May, which has allowed the club to purchase several influential local and foreign players, as a small example of what can be done.

He said if Esteghlal and Persepolis are truly privatized, they can better focus their investments on training next-generation players in their youth and talent clubs, selling more merchandise, providing better facilities to players and staff, and earning more rewards through progressing in tournaments.