Egypt has announced the imminent launch of a free zone in Nuweiba, the first in the Sinai Peninsula, and experts believe such a project will boost economic ties with Saudi Arabia and increase Egyptian exports. 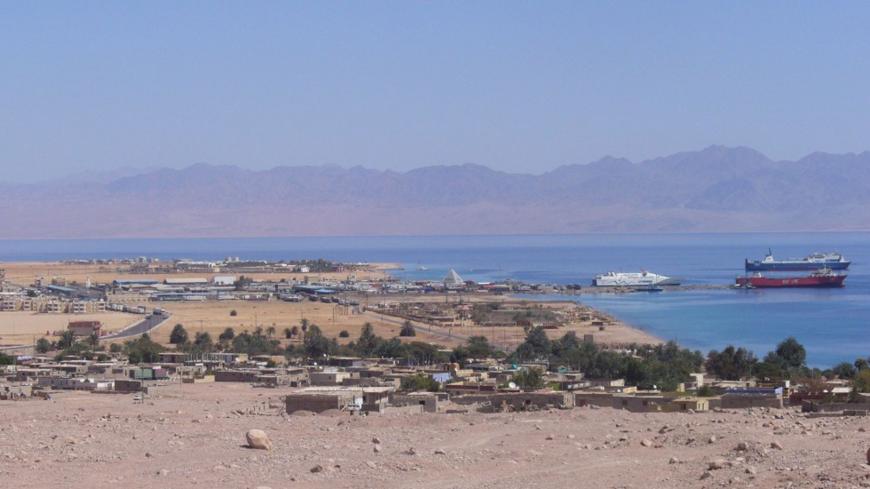 Nuweiba Port, where a free zone has been announced by the Egyptian government, Nuweiba, Egypt, Dec. 27, 2008. - Wikipedia/Cairocamels

CAIRO — CEO of the General Authority for Investment and Free Zones (GAFI) Mohsen Adel announced Dec. 4 that this month would witness the launch of a free zone in Nuweiba with projects that would boost exports to Arab and African markets. This is the first free zone to be established in the Sinai Peninsula.

Adel said on the sidelines of the Egyptian-Saudi Business Council meeting held on Nov. 27 that the zone, which extends over 1 square kilometer (0.4 square miles), would serve as a hub for investors, especially Saudis, being only 10 minutes away from the Saudi city of Tabuk. He noted that in order to facilitate import and export operations, the zone would be linked to a port. He did not specify which port he meant.

He indicated that the purpose of the zone would be primarily industrial. He added that GAFI has experienced a shift in the Saudi investment trends, as it has received a large number of Saudi industrial investment requests after such requests had been focused mainly on real estate.

The foundation stone of the zone was laid July 14 as Minister of Investment and International Cooperation Sahar Nasr visited the southern Sinai Peninsula.

Public free zones are investment zones for export markets. The government provides such zones with infrastructure and facilities as well as an independent customs unit. According to the official website of the Ministry of Investment and International Cooperation, the Egyptian government owns nine public free zones. These zones are not subject to customs, sales tax or other taxes and duties imposed on exported or imported goods.

In 2017, GAFI announced a strategy whereby it would establish public free zones across all governorates.

Mohammed Youssef, an economic expert, told Al-Monitor that the location of the free zone in Nuweiba offers investors several advantages and can lead to an increase in exports and job opportunities in the south Sinai region, all the while boosting foreign exchange reserves.

He said, “The zone’s proximity to Saudi Arabia will lead to stronger ties with the Saudi economy, especially in light of the Egyptian-Saudi investment integration. But it all depends on the nature of the projects to be established in this zone and whether or not they will produce high-value-added exports [such as industrial engineering projects]."

Also, according to Youssef, this free zone would lure Saudi investors by providing them with an investment environment that offers greater return on investment and great economic activities that produce goods and services needed by the Saudi northern region such as home appliances and electronics.

Asked about the possibility of linking the free zone in Nuweiba to the Saudi NEOM project, Youssef said, “Cooperation would be possible in the event of macroeconomic development and if such cooperation managed to absorb skilled Egyptian laborers, exploit Egyptian economic resources and optimally use Saudi funds.”

The NEOM project, located on the border with Egypt, is a $500 billion Saudi economic project for a commercial and industrial investment zone in the Red Sea.

Khalid al-Shafei, an economic expert and head of the Capital Center for Economic Studies and Research, told Al-Monitor that given its exceptional location, the Nuweiba zone stands as one of the most important investment zones capable of developing ties between Egypt and Saudi Arabia. A bright future lies in store for this zone amid the Egyptian-Saudi initiative to launch future projects with huge investments.

“The zone is a step toward the development of the Sinai Peninsula. The funds earmarked for the Sinai development projects amount to $16 billion, half of which will be provided by the Egyptian state while the other half will be offered by the Saudi side, as the Egyptian government announced during the first half of 2018,” he said.

Shafei added, “The free zone in Nuweiba — similarly to other promising investment zones such as the free zone in Minya — will greatly benefit from the incentives stipulated by the 2017 investment law. According to these, qualifying investment projects would have 50% of their cost deducted for three renewable years.”

The free zone in Nuweiba is a stepping stone for Egypt as it helps the country move toward boosting economic cooperation with Saudi Arabia and promoting development in Sinai, a top priority for the government in its fight against terrorism and extremism.