US gives Iraqis an out on Iran sanctions

Although Iraq continues to accuse Washington of meddling in its internal affairs, both countries have made concessions on Iran sanctions. 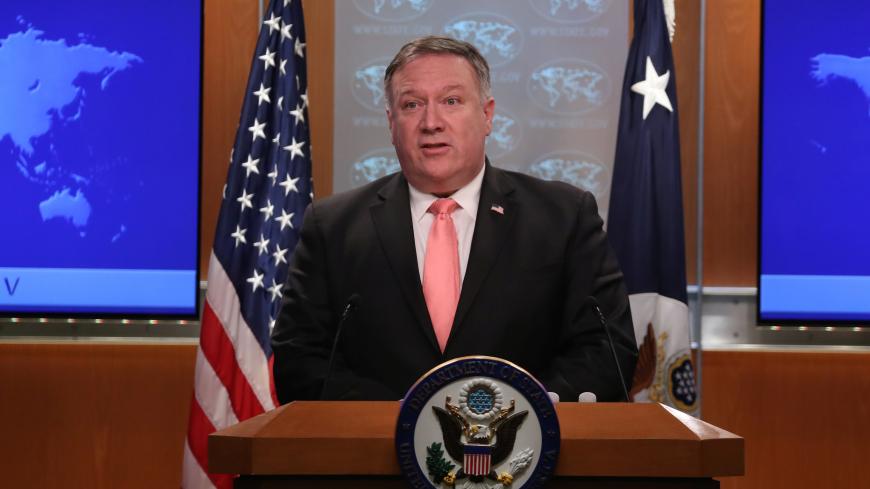 US Secretary of State Mike Pompeo speaks to reporters during a news briefing at the State Department in Washington, Oct. 23, 2018. - REUTERS/Cathal McNaughton

As Iran sanctions went into effect today following President Donald Trump’s withdrawal from the nuclear accord, Washington has agreed to grant Iraq a key exemption that would spare it from some of the most damaging effects.

“A waiver was granted to allow Iraq to continue to pay for electricity imports from Iran,” a State Department official told Al-Monitor. “We are confident this will help Iraq limit electricity shortages in the south. We continue to discuss our Iran-related sanctions with our partners in Iraq.”

Iraqi Foreign Ministry spokesman Ahmed Mahjoub told reporters last month that as much as two-thirds of Iraq’s electricity supply is contingent on natural gas imports, although that number is in dispute.

“Cutting off import of refined products would be a problem because Iraq, despite its immense resources, has a refining shortage and depends on Iran for refined products,” Kirk Sowell, the head of political intelligence firm Utica Risk Services, told Al-Monitor.

According to a new Congressional Research Service report, Iraq’s new parliament Speaker Mohammed al-Halbousi has said that “Iraq will always be alongside the Iranian people” and that he opposes “the exercise of any economic pressure and embargo on Iran.”

However, the resumption of Iranian oil sanctions has forced Iraq to end an oil swap deal with Tehran. While Baghdad was not granted an oil sanctions waiver, waivers were granted to eight of Iran’s top oil purchasers: China, Japan, South Korea, Taiwan, India, Turkey, Greece and Italy.

And while Washington has spared Iraq the worst of the sanctions impact on Iran, the underlying politics continues to pose a major irritant on US-Iraqi relations.

Secretary of State Mike Pompeo has issued 12 demands for Iran to adhere to in any new agreement that would results in sanctions relief. The fourth demand calls on Tehran to “Respect the sovereignty of the Iraqi government and permit the disarming, demobilization and reintegration of [Shiite] militias.”

Pompeo doubled down today during a press conference announcing the oil sanctions exemptions.

“The efforts in Iraq to undermine the Iraqi government funding Shi’a militias are not in the best interests of the Iraqi people,” he said.

“We are not issuing waivers for any new civil nuclear projects,” the State Department said in a statement today. “We are only permitting the continuation for a temporary period of certain ongoing projects that impede Iran’s ability to reconstitute its weapons program and that lock in the nuclear status quo until we can secure a stronger deal that fully and firmly addresses all of our concerns.”

While the Trump administration has vowed a “maximum pressure” strategy on Tehran, it ran afoul of Iran hard-liners in Congress last week after reports emerged that it would not force the Brussels-based financial messaging system SWIFT from kicking out Iranian banks. However, SWIFT announced today that it would shut out the 50 Iranian banks sanctioned as part of today’s sanctions announcement after Treasury Secretary Steven Mnuchin threatened penalties on participating banks and board members Friday.

The SWIFT decision appears to have appeased some Iran hard-liners — at least for the time being.

“I am open to having a handful of Iranian banks remain on SWIFT only for humanitarian transactions,” Mark Dubowitz, the head of the hawkish Foundation for Defense of Democracies, told Al-Monitor via Twitter. “But Treasury needs to have a zero-tolerance policy for these banks exploiting this channel for sanctions busting purposes as [the] regime has done in the past.”