With rising US pressure, Iran worries about losing ground in Iraq

Iran is worried about losing influence in Iraq after the reimposition of US sanctions on Iran and because of US pressure on Iraq to distance itself from Iran. 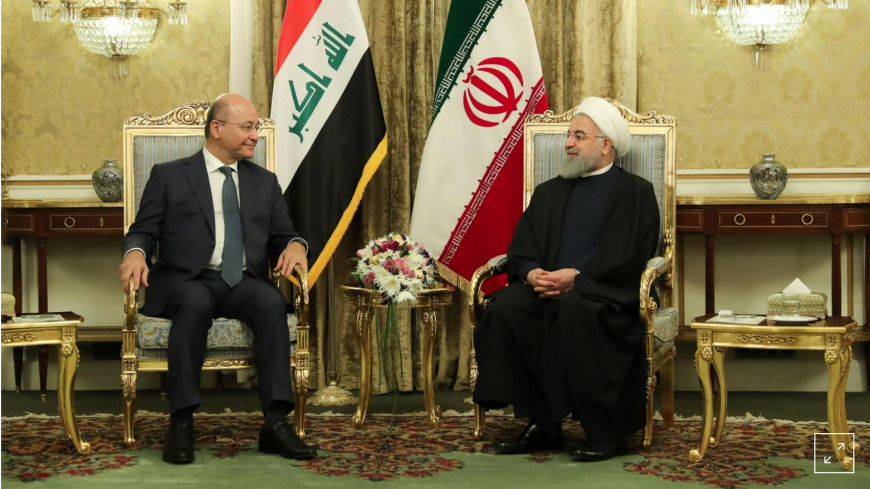 Iraqi President Barham Salih met with Supreme Leader of the Islamic Revolution Ayatollah Ali Khamenei Nov. 17 in Tehran, where Khamenei underlined that Iraq must retain its Popular Mobilization Units (PMU). Khamenei stated that the PMU were among Iraq’s major achievements in the past few years.

Khamenei has reiterated this stance in previous meetings with Iraqi officials, including former Prime Minister Haider al-Abadi, which shows how important this matter is for Iran.

Meanwhile, the Donald Trump administration has insisted on the disarmament and disbanding of pro-Iran military factions in Iraq as part of the 12 conditions that US Secretary of State Mike Pompeo proposed to sign a new agreement with Iran instead of the 2015 Joint Comprehensive Plan of Action, which the United States exited this year. The seventh condition calls for “respect the sovereignty of the Iraqi government and permit the disarming, demobilization and reintegration of [Shiite] militias.”

Khamenei underlined the importance of widening the scope of relations between the two countries, saying, “Iranian officials have a strong will to develop their cooperation with Iraq. I strongly believe this.”

Salih also met with his Iranian counterpart, Hassan Rouhani, and reiterated the need to develop their ties. Rouhani called for expanding economic exchange between the two countries, and he said that “Iran and Iraq can increase their annual bilateral trade exchange from $12 billion to $20 billion.”

During Salih’s meeting with Secretary of the Supreme National Security Council of Iran Ali Shamkhani, the latter said, “The many plots that the United States and some regressive countries in the region [meaning Saudi Arabia] are weaving to ruin the friendly ties between our people will fail.”

Although Salih responded positively to the Iranian demands and thanked Iran’s efforts in the Iraqi war against the Islamic State (IS), the Iraqi delegation did not take any serious steps to sign trade and economic contracts and did not even bring up the topic. Also, the Iraqi delegation did not include ministers and figures focused on developing ties between the two countries. However, Salih’s visit to Jordan Nov. 15 was different, as several ministers accompanied him.

The United States is trying to pressure Iraq on all levels to distance itself from Iran and curb Iranian influence in the country. It also gave Iraq 45 days to stop importing gas and electricity from Iran. Iraqi officials revealed to Reuters that Iraq plans on submitting a proposal to the United States to continue importing gas and energy supplies in exchange for medication and foodstuff.

In line with US pressure and sanctions, Iraqi Minister of Oil Thaer al-Ghadban asserted during his first press conference that Iraq will put its national interest first in regards to sanctions on Iran. He said Iraq will stop exporting oil from Kirkuk fields to Iran, estimated at less than 30,000 barrels a day.

Iraq is also gradually looking to Turkey to bridge the gap stemming from reducing its dealings with Iran.

Spokesperson for the Ministry of Oil Asem Jihad announced that “oil exporting from Kirkuk had resumed to the Turkish Jihan Port Nov. 16 through Iraqi Kurdistan pipelines at a rate of 50,000 to 100,000 barrels a day.”

Reports have been circulating about Iran’s reduced influence and popularity in Iraq. According to a study that Alustakilla research group conducted and The Washington Post published Nov. 16 that involved 2,500 to 3,500 national interviews, Iraqi Shiites favoring Iran dropped from 88% in 2015 to 47% in the fall of 2018. During that same period, the percentage of Shiites who do not favor Iran rose from 6% to 51%.

Iran is worried about losing its Iraqi market. Manager of the Iraqi Chamber at the Iranian Ministry of Commerce and former Iranian trade adviser in Iraq Ibrahim Mohammad Reza warned on Nov. 17 that Iran would lose its market in Iraq to its competitors unless it takes serious steps to maintain it. He said Iran occupies 13% of the Iraqi market — the United Arab Emirates has a share of 25%, Turkey has 18% and China has 17%. Iran’s national economy significantly depends on its exports to Iraq, as they account for 21% of its total exports to the world.

The above indications show that Iran’s influence in Iraq is declining gradually as nationalist voices in the country rise and foreign pressures increase on the Iraqi government to distance itself from Iran.