What's behind Europe’s outreach to Erdogan?

Europe’s acceptance of President Recep Tayyip Erdogan as an interlocutor is driven by Turkey’s continuing strategic importance rather than any reflection on its president. 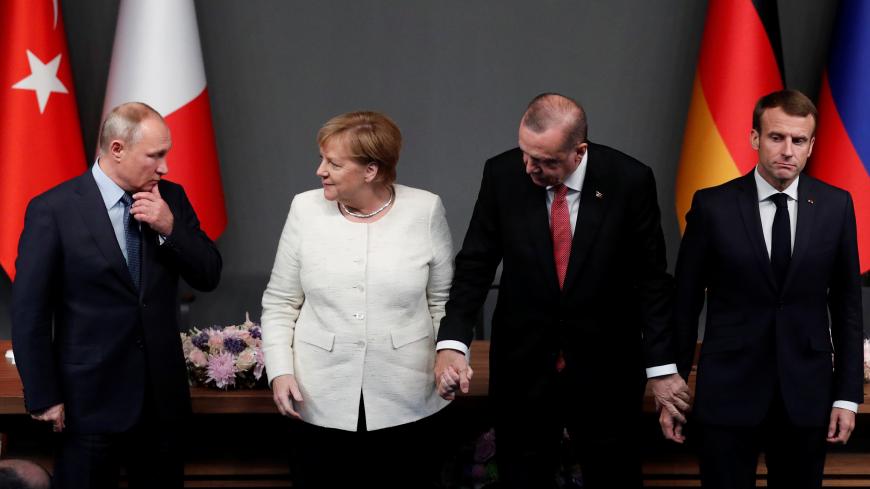 Turkish President Recep Tayyip Erdogan, with his abrasive manners and undiplomatic approach to international affairs, is not an easy leader for the West to deal with. Love him or not, however, the West is showing once again that it can’t afford to ignore him. Because of this, Erdogan has enhanced his international image over the past few months, going from being a potential pariah in Western eyes to being viewed as an interlocutor who is by turns a regional game-changer, a potential peacemaker and even a champion of international justice.

Many analysts argue that it is Turkey’s importance, rather than Erdogan as a leader, that is driving the current dynamics. They note that European leaders continue to criticize him over his record on democracy and human rights, even to his face when hosting him on official visits. These same European leaders are also trying, however, to ensure that such criticism does not escalate into fresh crises with Ankara at a time when they need Turkey’s cooperation on such vital issues as illegal immigration from the Middle East and the fight against Islamic terrorism.

Ironically, only two month ago Erdogan appeared to be a weak and ineffectual regional leader when he failed in his attempt to forestall an attack on Syria’s Idlib province by Russian-backed Syrian regime forces. The United Nations had warned that if launched, such an offensive could turn into the worst bloodbath yet in Syria.

Erdogan’s attempt to prevent the attack, during the summit he held in Tehran with Iranian President Hassan Rouhani and Russian President Vladimir Putin in early September, fell flat on its face in front of live cameras. Erdogan proposed a general cease-fire in Idlib to cover all parties, including radical Islamist groups targeted by Russia, but Putin’s outright rejection of the proposal, and Rouhani’s backing of Putin, left Erdogan looking like the least influential of the three leaders.

The Turkish president went on, however, to snatch victory from the mouth of defeat 10 days later, during an emergency meeting on Idlib with Putin at the Russian Black Sea resort of Sochi. With the tense situation in Idlib appearing to be headed from bad to worse, Erdogan succeeded in obtaining a cease-fire and also brokered a deal for the creation of a buffer zone between Syrian regime forces and the opposition to be followed by the disarming of the opposition and cooperation for ridding the region of jihadist fighters. Precarious as it might be, the Sochi deal continues to hold and remains one of Erdogan’s rare successes in the effort to resolve the Syrian crisis.

Armed with this diplomatic achievement, Erdogan arrived in New York to address the UN General Assembly on Sept. 25. While there, he held talks with various European leaders, including French President Emmanuel Macron and British Prime Minister Theresa May.

Erdogan immediately followed up his New York trip with a Sept 28-29 visit to Germany at the invitation of President Frank-Walter Steinmeier. The Germans received Erdogan with state honors, and he also held talks with Chancellor Angela Merkel. During the banquet given in Erdogan's honor, Steinmeier criticized him about the state of democracy and human rights in Turkey. Talking to reporters while flying to Turkey, Erdogan brushed off Steinmeier's criticisms as “unbecoming.”

The German visit was not, however, marred by any major glitches capable of undermining the cooperation Ankara and Berlin are now working to develop on practical matters. This is a far cry from the situation between the two countries last year, when Erdogan taunted German officials, calling them Nazis after Berlin prohibited him and his ministers from canvassing expatriate Turks in Germany ahead of the constitutional referendum held in April 2017.

The murder of the Saudi journalist Jamal Khashoggi in the Saudi Consulate in Istanbul on Oct. 2, only a few days after Erdogan's high-profile visit to Germany, once again turned the international spotlight on the Turkey's president.

The manner in which Erdogan managed the investigation into the murder, insisting all along that Turkey would not help cover-up the crime for the sake of its ties with Riyadh, earned him praise in the West. Even US and European media, which have generally been hostile toward him, praised his handling of the affair, especially after he forced Riyadh to admit that Khashoggi had been killed in the consulate.

Despite this, however, many Western columnists also felt obliged to remind their readers of Erdogan’s own repression of independent journalists and democracy activists in Turkey. Nevertheless, there appears to be a general consensus that the Khashoggi affair helped Erdogan politically by diverting attention from Turkey’s own shortcomings, at least for the time being.

The Oct. 27 summit on Syria that Erdogan hosted in Istanbul, attended by the leaders of Russia, Germany and France, focused more international attention on him, this time as a potential peacemaker. The summit may have provided few concrete results, but as Sedat Ergin, a veteran commentator on international affairs, noted, it worked to Erdogan’s advantage. “By taking responsibility and hosting this summit, [Erdogan] has emerged as a principal actor in efforts to solve the Syrian crisis,” Ergin wrote in his column for Hurriyet.

That summit was followed on Oct. 29 by the inauguration of Istanbul’s new, ultramodern airport at a ceremony attended by leaders and other high-level officials from 50 countries, including seven southeastern European nations, though none from Western Europe.

Prior to that, Erdogan had paid an official visit to Hungary on Oct. 9 as the guest of Prime Minister Victor Orban. He would later host Ukrainian President Petro Poroshenko in Turkey, on Nov. 3. Erdogan is now set to visit Paris Nov. 10-11 for Armistice Day commemorations and more talks with Macron. He is also expected to meet President Donald Trump while there to try and capitalize on the relatively improved atmosphere between the two countries since the release of the American Pastor Andrew Brunson from Turkish detention, ending months of heightened tensions.

The level and intensity of interactions between Turkey and key Western countries of late appear to belie claims that Erdogan is an isolated leader only two steps away from being ostracized by the West. Retired Ambassador Selim Kuneralp, a foreign affairs commentator for the Tele1 channel, believes that Turkey’s ongoing importance to the West is driving the current trend.

“In international relations, no one looks at who is running the country that has to be dealt with, but at how important the ties with that country are,” Kuneralp told Al-Monitor. “[With Turkey being] an important and strategically placed country, Western leaders have to deal with Turkey’s leader, whoever he may be, which presently means Erdogan.”

Kuneralp stressed, however, that whatever the current trend might be, Turkey’s ties with Europe are not being “normalized” in the true sense of the word, because Ankara’s bid to join the European Union is not moving forward. In fact, in August, Macron publicly questioned EU membership for Turkey. “Turkish President Recep Tayyip Erdogan has a pan-Islamic project that is contrary to our European values,” Macron said, advocating building a strategic partnership with Istanbul rather than granting Turkey EU membership.

Such remarks by European leaders do not point to a process of “normalization” with Turkey, but a search for another kind of relationship with Ankara for the sake of pragmatic considerations. Serkan Demirtas, a foreign policy commentator for the English-language Hurriyet Daily News has noted this. “It should be well understood by the government that putting things back on track with regard to key European bodies requires a full dedication to democratizing Turkey without delay,” Demirtas wrote.

Be that as it may, Erdogan is using the optics of his newly energized ties with Western countries to enhance his image at home. That is all he probably needs for now as Turkey prepares for crucial local elections in March, which Erdogan hopes to use to reinforce his grip on power.