Have relations between Turkey and Europe reached a turning point?

The decision by the European Court of Human Rights on a jailed Kurdish leader might be marking a turning point in ties between Turkey and the European Union. 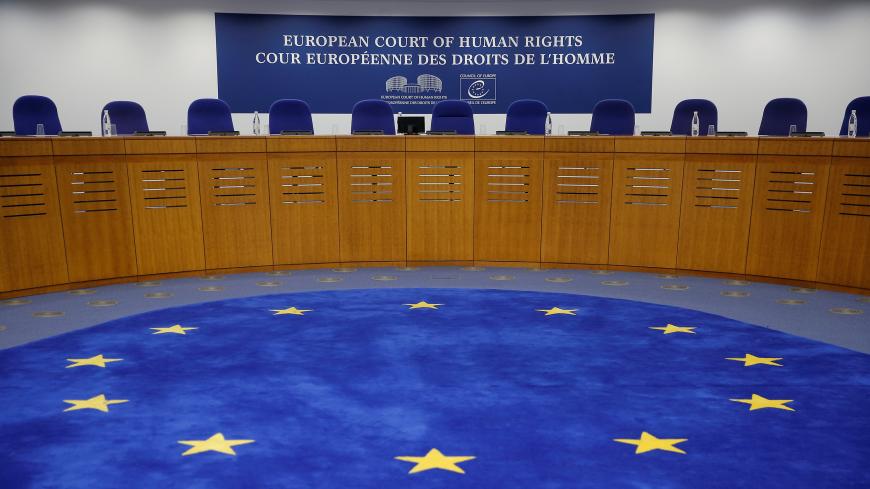 A view shows the courtroom of the European Court of Human Rights in Strasbourg, France, Jan. 24, 2018. - REUTERS/Vincent Kessler

Turkish President Recep Tayyip Erdogan recently seemingly scored foreign policy achievements one after the other that gave an impression that normalization with the Western world is in progress. His hosting of the quadripartite Syria summit in Istanbul brought in French President Emmanuel Macron, German Chancellor Angela Merkel and Russian President Vladimir Putin. Then Erdogan paid a visit to Paris to participate in ceremonies marking the end of World War I.

All these high-level contacts with major Western leaders came after his official visit to Germany, where he was greeted with a red-carpet reception at his insistence.

In the eyes of many in Turkey, the transactional relationship with the West ultimately had been maintained as a result of the interests of both sides. The relationship would be the best choice for Erdogan as it would relieve him from Western pressures on Turkey’s human rights violations and deficits.

The West, and in particular the Europeans, seem to believe they are getting a profitable deal on Turkey’s actions to stem the Syrian refugee flow. Yet the Europeans are indefinitely postponing Turkey’s bid for membership in the EU.

The Financial Times in late October reported on the visit of an 80-strong delegation led by German Economics Minister Peter Altmaier, a key Merkel ally, and quoted him as saying “Germany would not let its concerns about human rights overshadow the pursuit of better economic ties.”

However, perhaps even for the sake of lip service, the Western leaders still brought to Erdogan's attention some cases of Turkish wrongdoing in curtailing fundamental freedoms. The case of Osman Kavala, the leading philanthropist of Turkey and a prominent activist of civil society who has been in jail for more than a year without any indictment, was brought up in Steinmeier’s and Macron’s conversations with Erdogan.

Erdogan is very well known by his obsession about the Gezi protests that took place in May and June of 2013 and spread across Turkey. He sees Gezi as the first serious Western — that is, German — attempt to remove him from power, and Kavala as the main Turkish culprit behind it. Although it was never substantiated, Erdogan believes Kavala financed the event and all the government-controlled media dubbed Kavala as the “Red Soros,” implying his leftist ideological tendencies.

Kavala, thanks to his leading role in many civil society associations that he founded or took part in, enjoys an extensive international network. It was not surprising that his long imprisonment without indictment would be brought up by the Western leaders in their encounters with the Turkish president on the eve of the normalization of once-soured relations.

Erdogan burst out in a fury. He angrily told them that Kavala is a terrorist and has evidence about it. When I learned this from a very reliable source who is privy to Erdogan’s talks with his German and French counterparts, my reaction was to fear that all this could be counterproductive.

My fear was confirmed when the people of Turkey awoke the morning of Nov. 16 with a new wave of detentions. At 6 a.m., the homes of 13 people in Istanbul were raided and they were taken into custody. They are accused of being associated with Kavala. Every one of them was related to associations such as the Open Society Institute and Anatolian Culture, which Kavala either founded or took a leading role in.

Among the detained is professor Turgut Tarhanli, the most-renowned academician in Turkey on human rights law and the dean of the Faculty of Law of Istanbul Bilgi University; professor Betul Tanbay, the head of the Mathematics Department of Bosphorus University in Istanbul who was a member of the delegation during the Gezi protests in 2013 that negotiated with then-Prime Minister Erdogan; and many other prominent human rights defenders. The Istanbul Police Department issued a statement that sounded like a verdict, accusing all of being related to Kavala hierarchically to overthrow the legitimate government.

The absurdity of the accusations prompted quick reactions from international circles. The secretary-general of the Council of Europe, Thorbjorn Jagland, immediately criticized the development as worrying. For the Europeans, the new wave of repression was especially disturbing because on Nov. 22, EU foreign policy chief Federica Mogherini and Johannes Hahn, commissioner for European neighborhood policy and enlargement negotiations, would be visiting Turkey.

That would signify the highest level of contact between the EU and Turkey after a long interval. The wave of detentions became too embarrassing for the Europeans who had been inclined to balance their principles regarding human rights with the imperatives of realpolitik that dictated normalization with the Erdogan regime.

Surprisingly, in less than 36 hours, all but one detainee was released, although they have to report to police weekly and are restricted from traveling abroad.

Under Turkey’s current conditions, that those detained were deprived from traveling abroad while possibly facing trial for allegedly attempting to overthrow the government received praise of sorts, as this means the accused do not have to go behind bars or be kept in jail indefinitely without indictment — as has been the case with Kavala. The trauma of the last wave of repression was so heavy on public opinion that social media was full of sentiments that Turkey had been pushed into inexplicable darkness. Therefore, the release of 12 civil rights defenders renowned for pacifism and nonviolent action was met with relief.

But 48 hours later, these feelings of relief gave way to grave concerns. On Nov. 20 Erdogan angrily reacted to the Western world, criticizing some Western circles for statements expressing discomfort because of the measures taken against the civil rights defenders. He once again accused Kavala of financing the 2013 Gezi events.

However, the most significant development Nov. 20 was the verdict of the European Court of Human Rights involving pro-Kurdish jailed leader Selahattin Demirtas. The court in Strasbourg, France, not only issued a ruling that Demirtas, the former chairman of the pro-Kurdish Peoples' Democratic Party and a lawmaker who has been in jail for more than two years, should be released immediately, it also for the first time decided that Turkey had violated Article 18 of the European Convention on Human Rights.

“The Court found that it had been established beyond reasonable doubt that the extensions of Demirtas’ detention, especially during two crucial campaigns of the referendum and the presidential election, had pursued the predominant ulterior purpose of stifling pluralism and limiting freedom of political debate, which was at the very core of the concept of a democratic society,” the ruling said.

The court had a bombshell effect in Turkey. Erdogan was quick to respond. “It does not bind us (Turkey),” he said. However, it does. Article 90 of the Turkish Constitution stipulates it does. The authoritative voices on public law and constitutional law also were quick to explain that the ruling is binding and that Turkey is obliged to implement it according to the Turkish Constitution. A former Turkish judge on the European court emphasized that if Turkey does not the follow the ruling, it could lead to Turkey's expulsion from the Council of Europe.

The two successive developments, the repression of civil rights defenders on Nov. 16 and the European Court of Human Rights' ruling on Demirtas, will have inevitable bearings on the relations of Turkey with the West. The area of maneuver for the Europeans to disregard the violations of human rights by the Erdogan regime in Turkey for the sake of geopolitics and trade is narrower than ever.

The transactional relationship and normalization also have their limits. November 2018 may serve as a turning point in European-Turkish relations. Europe may find itself at the crossroads on how to engage with a country without a rule of law, that places itself outside the provisions of international law and that has no respect for international treaties it has signed.