The European Court of Human Rights has ruled that Turkish philanthropist Osman Kavala must be released in the absence of evidence to support his charges, but legal observers say Ankara is unlikely to comply. 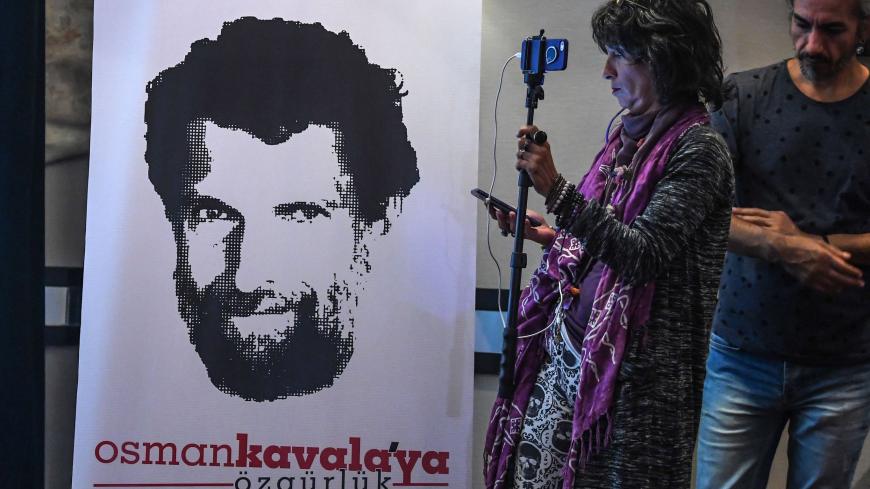 A journalist stands in front of a poster featuring jailed businessman and philanthropist Osman Kavala during a press conference by his lawyers on Oct. 31, 2018. - OZAN KOSE/AFP via Getty Images

The European Court of Human Rights called today for the immediate release of the prominent Turkish businessman, human rights defender and philanthropist Osman Kavala, who has been languishing in a Turkish prison for the past 770 days. Kavala is accused of seeking to overthrow the government and the constitutional order through force and violence.

The court, whose rulings are legally binding, said it has found that Turkish authorities were unable to provide reasonable evidence that the 62-year-old had committed an offense.

Kavala, along with 15 other co-defendants, faces life imprisonment without parole if convicted. All have denied any wrongdoing.

The Turkish government has not yet commented on the court’s ruling and it remains unclear whether it will heed the European body’s demand for his freedom ahead of Kavala’s next hearing, which is set for Dec. 24-25.

The case has drawn global attention, with the likes of German President Walter Steinmeier raising the businessman’s case in a face-to-face meeting with President Recep Tayyip Erdogan. But Turkey’s conspiracy-seized president remains unswayed, accusing Kavala of plotting with Hungarian Jewish financier and fellow philanthropist George Soros to orchestrate the 2013 Gezi Park protests in order to topple him. The claims have been widely ridiculed by rights groups and Western governments alike.

Human Rights Watch said in a statement today, “In reality the indictment is largely incoherent, packed with wild conspiracy theories, which Kavala himself called a ‘fantastical fiction.’ Kavala’s detention is only one example of the harsh crackdown by the Turkish government on its critics. Over the last three years, the government has closed down more than 1,500 associations and foundations, most of them during a state of emergency that allowed the government to rule by emergency decree, without effective parliamentary or judicial oversight.”

Emma Sinclair-Webb is the Turkey director for Human Rights Watch. She told Al-Monitor, “It's a really important ruling that says Turkey pursued an ulterior purpose of reducing Kavala to silence by detaining him,” Sinclair-Webb continued. “The court says that detention was done in bad faith and not because he committed a crime or that there existed evidence that he had. If Turkey doesn’t release him immediately they will prolong the violations.”

"Fittingly coming on International Human Rights Day, it's a hopeful sign, a very hopeful decision,” Sinclair-Webb said. “We call for his immediate release.”

Most critically, she observed, the European court found Turkey to be in violation of Article 18 of the European Convention on Human Rights, which relates to weaponizing laws to in order to restrict individual rights. The court, which has been inundated with Turkish cases since the failed 2016 coup, noted that Kavala had been arrested more than four years after the Gezi events and more than a year after the attempted putsch.

The court also indicated that Erdogan may have egged on prosecutors, noting, “It was also important to note that those charges had [been] brought following two speeches given by the President of the Republic in November and December 2018, in which [Kavala’s] name had been cited.” In a November speech, Erdogan claimed of Kavala without naming him, “An individual who financed the terrorists during the Gezi events — at the moment he is in jail. Who was behind him? The famous Hungarian Jew, George Soros.”

Howard Eissenstat is an associate professor at St. Lawrence University and non-resident senior fellow at the Project on Middle East Democracy. He told Al-Monitor that while the court’s ruling was “welcome and expected,” Turkey “has had a record of circumventing [its] rulings in high-profile cases.”

Eissenstat was alluding to that of Selahattin Demirtas, the Kurdish human rights lawyer and former co-chair of Turkey’s largest pro-Kurdish bloc in the parliament. The 45-year-old has been stuck in prison since October 2016 over a torrent of thinly evidenced terror charges for which he currently faces up to 142 years in prison.

On Sept. 20, Demirtas and fellow former co-chair and inmate Figen Yuksedag were slapped with fresh charges of inciting the 2014 riots over the Turkish state’s perceived indifference over the fate of the Syrian Kurdish town of Kobani, which was besieged by the Islamic State. Fifty-three people, mostly Kurds and two of them police officers, died in the protests.

A day after the charges against Demirtas and Yuksekdag were filed, Erdogan claimed that freeing the Kurdish leaders would rob those who died during the riots of justice. "We can't release these people," Erdogan said. “If we release them, our martyrs will have us account for it in the eternal realm.”

The European Court, citing Article 18, ordered his immediate release in November of that year. The court said his detention had the “ulterior purpose of stifling pluralism and limiting freedom of political debate.” Turkey hasn’t budged.

Eissenstat predicted that Kavala may not be freed anytime soon either. “As in the case of Demirtas, the Turkish government has simply invested too much politically in demonizing Kavala. It is possible that Turkey will comply with the ruling, but I don’t expect it.”