Erdogan plays big: A grand bargain in Syria with Trump and Putin?

Turkey's President Recep Tayyip Erdogan plays a big gambit with American and Russian counterparts, but can he win? 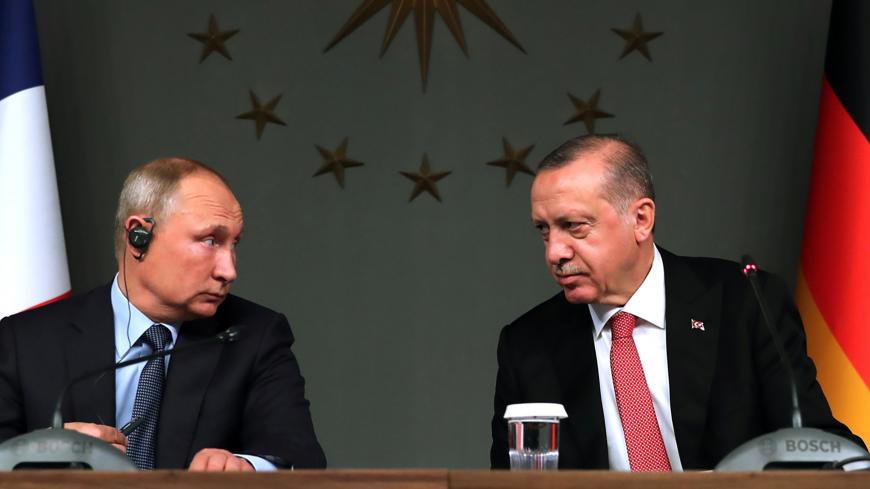 On Nov. 10 Turkey will observe the 80th anniversary of the death of Mustafa Kemal Ataturk, the founder of the modern Turkish Republic. Yet on that same date his latest successor, Recep Tayyip Erdogan, will be paying a visit to Paris for the 100th anniversary of the end of World War I. A century ago, Ataturk — an Ottoman Empire war hero and respected general — was preoccupied with a retreat from a region he commanded in northern Syria. Now the longest-serving Turkish leader, Erdogan, has been invited by French President Emmanuel Macron to attend a Nov. 11 celebration marking the end of a war where the Ottoman Empire was on the losing side.

In a sense, Macron is returning the invitation of Erdogan for the Syria summit held last month that gathered German, Russian and French leaders — the big guys — in Istanbul. A century ago, Ataturk was in Aleppo, commanding an army, and 100 years later, “the big guys” met in Istanbul to decide on the fate of Aleppo’s environs.

The 100th anniversary of the end of World War I may help Erdogan enhance his image as one of “the big guys” of international politics. He also announced that he will be meeting Presidents Donald Trump and Vladimir Putin in Paris. This is another clue that Erdogan is playing big and that he is one of the very few people in the international game who has leverage with the leaders of both the United States and Russia.

His relations with Washington are better than they have been for some time. Turkey has surprisingly become one of the eight countries exempted from the American oil sanctions against Iran. What makes Turkey privileged is that it is the only country among the eight on the oil waiver list that is Iran’s immediate neighbor.

Nothing can illustrate better how relations between Erdogan and Trump have warmed up than this exemption. Erdogan even went as far as to say publicly that the American president promised to instruct his people to review the case of a Turkish bank that is expected to be fined by US Treasury over the Iran sanctions scam.

Apart from the release of American pastor Andrew Brunson, Erdogan’s rapprochement with Trump interestingly has not been a result of a sort of give-and-take between the two. Erdogan has given almost nothing to Trump for securing such preferential treatment from him. On the contrary, he cornered Trump’s favorite Middle East policy card, Saudi Arabia. Columnist Jamal Khashogggi's murder came as a blessing for Erdogan. He transformed it into effective leverage that he could play against Washington and Riyadh simultaneously. He has played it very successfully, and now is on his way to Paris to collect its remaining dividends.

On the Khashoggi affair, Erdogan improved his image to the extent of writing an op-ed piece as if he had been championing freedom of the press for years.

The Washington Post could not help but publish an editorial that started with the following: “Demanding a full accounting for the murder of journalist Jamal Khashoggi at the consulate of Saudi Arabia in Istanbul has earned President Recep Tayyip Erdogan a modicum of praise for moral clarity. The Turkish president could strengthen his credibility by applying the same principles to his own rule.”

“Mr. Erdogan is rightly outraged by Mr. Khashoggi’s murder. Now he should do the right thing for his own domain: Free the journalists, scholars and civil servants, and begin to restore Turkey’s once-vibrant democracy and free press,” the editorial concluded.

But why would he do that? This would weaken his stranglehold on power. Why would he do what the editorial asked if he could earn “a modicum of praise for moral clarity” without taking such action? Erdogan is a clever political operator and at the moment what he cares is the new good climate with Trump. He is very well aware that Trump does not care about restoring Turkey’s once-vibrant democracy and free press or the release of more than 100 journalists from jail.

In his talk with Trump, it is almost certain that Erdogan will bring up the issue of the eastern Euphrates, where the American military cooperates with the Syrian offshoot of the outlawed Kurdistan Workers Party (PKK). Erdogan, emboldened with the dazzling diplomatic show in Istanbul, spelled out Turkey’s intention to eradicate the presence of the Kurdish allies of the United States in the eastern Euphrates and Turkish artillery began to pound the Kurdish targets. Erdogan went as far as to imply that Turkey will move militarily to the towns such as Tell Abyad and Kobani. After the Turkish artillery bombardment, the Americans started joint patrols with elements of the Syrian Kurdish People's Protection Units along the Turkey-Syria frontier to deter Turkey from creating a potential bone of contention between the two NATO allies.

It remains to be seen how Trump will react to Erdogan’s possible demands involving the eastern Euphrates. It appears that Turkish objectives are irreconcilable with those of the Syrian Kurds and the United States, unless the latter decides on a “sell-out” of the Kurds. History has a record on this that Erdogan should well know.

On Nov. 6, the US Embassy in Ankara issued a statement from Deputy Assistant Secretary of State Matthew Palmer after he met with a number of Turkish officials and business figures. “The United States values its counterterrorism cooperation with our NATO Ally Turkey. As part of my visit, I am pleased to announce that the U.S. Department of State’s Rewards for Justice program is targeting three senior members of the terrorist organization Kurdistan Workers Party (PKK),” the statement said. “The Department has authorized rewards for information leading to the identification or location of the senior PKK members: Murat Karayilan (up to USD $5 million), Cemil Bayik (up to USD $4 million), and Duran Kalkan (up to USD $3 million).”

With such gifts from his NATO ally, would Erdogan, in Paris, take a step back from the finalized purchase of the Russian S-400 air defense system that irritated the alliance?

In Paris, he will also meet his partner in Syria, Putin, with whom he is cooperating in a satisfying way “west of Euphrates,” principally in Afrin and above all in Idlib.

Erdogan plays big with Trump and Putin, he projects Turkey (and himself) as more than a “regional power” and portrays Ankara as a party in the grand bargain on Syria on an equal footing with his American and Russian counterparts.

Whether he wins or loses big is of secondary importance at the moment. He plays big.

That is important, and that brings its dividends.