A play by former political prisoners in Syria is showing audiences the devastating reality of abuse in Middle Eastern jails while offering a kind of therapy for those effected. 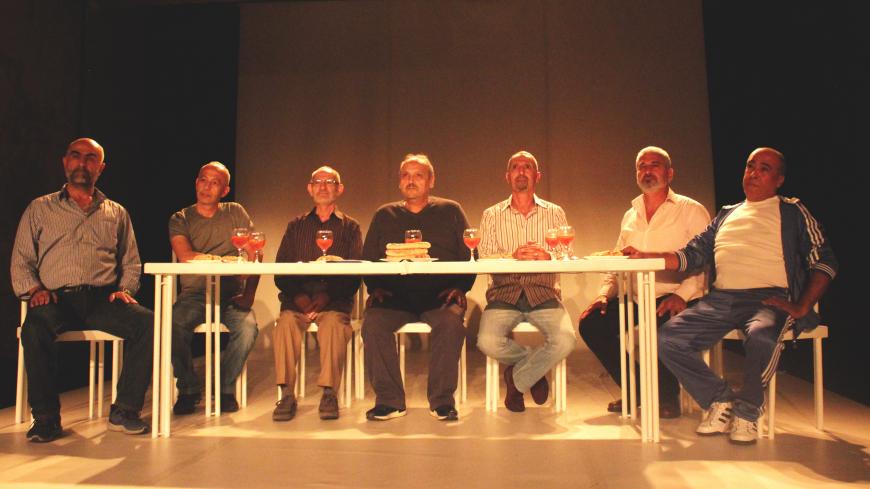 BEIRUT — Seven former Syrian political prisoners sat at a sparse dinner table, taking turns describing their cells. Some had lived alone in a pitch-black room barely a meter high, and others were in a 12-by-6-meter dungeon with over a hundred other men.

It was the opening scene of the play “Untitled,” held at Beirut’s Zoukak Theatre Company on Nov. 11. “Untitled” was the final performance of the 10-day Sidewalks Festival, an event showcasing local and international plays, films and workshops.

The play was written and performed by the members of the non-governmental organization Former Lebanese Political Detainees in Syria (FLPDS), in collaboration with UMAM Documentation & Research, a nongovernmental organization dedicated to creating a stable Lebanon. Each of the seven men spent between 10 and 15 years in Syrian prisons, primarily the infamous Tadmor prison in Palmyra.

The Lebanese, Palestinian and Syrian actors took the audience through a typical day in the life of a political prisoner. They shared how they would make a birthday cake out of their weekly rations of seven teaspoons of jam, stale bread, weak tea and a fifth of an apple and explained the slang they developed like the ‘night’ who would watch out for the prison guards while others were sleeping and the “sharra’a," a small hatch in the cell where food, however rarely, appeared.

These small details of day-to-day life are brought to life throughout the hour-long play, familiarizing the audience with the environment, and the relatively light tone is subverted by devastating and explicit descriptions of torture.

Following a moment of silence for the audience to process the gruesome stories they were just told, the men conclude by recounting their returns home. The play ends on a bittersweet note: While many of them came back to family, they are still battling through their trauma and their friends are still trapped.

“The play shows you how we were living in the prison, how we were tortured,” Ali Abou Dehn, a prisoner in Tadmor for 13 years and president of FLPDS. He told Al-Monitor, “it was a very hard period in my life. Harder then you could imagine.”

Abou Dehn was 27 and living in his home town of Hasbaya, in southern Lebanon, when he was captured by Syrian forces in 1987 because of his affiliation with the former Maronite Christian militia that has now become a political party called the Lebanese Forces.

The Syrian government occupied Lebanon after the outbreak of civil war in the mid-1970s until 2005. During this time, it clashed with various armed groups, imprisoning many Lebanese nationals in Syria.

Tadmor prison was notorious for its human rights abuses, including the 1980 massacre of some 1,000 inmates and reoccurring allegations of torture.

The prison was closed down in 2001 following a general amnesty for some 600 political prisoners by President Bashar al-Assad, who assumed power after the death of his father Hafez al-Assad. It was then that Abou Dehn and others were released.

The play seeks to raise awareness of the abuse experienced in the prison during its operation and to press for change in the region.

“My cry is, 'Help the political prisoners in Syria and help the prisoners who were freed,'” Abou Dehn told Al-Monitor, adding, “We are still living in a very bad situation even though we are out of prison.”

Abou Dehn also hopes the play will draw attention to prison systems in neighboring countries across the Middle East.

“It is very hard for the Middle East to learn that a prisoner has rights, he is supposed to be treated the same as every other prisoner in the world. They should teach him, they should keep him in better [health],” he said. “In Syria, in Egypt or Saudi Arabia, a lot of prisoners are dying for nothing, and you can help them … protect them.”

Filmmaker Monika Borgmann, who is co-director of UMAM, told Al-Monitor, “Sadly, prison is a key essential to understand the region.”

Abuse of prisoners are common from Iran to Egypt, and from Turkey to Yemen.

Borgmann noted that just as torture techniques tend to spread across the region, the play “could easily travel to other countries in the MENA region, because it is a kind of therapy” for the ex-prisoners, who on their release “didn’t get recognition, didn’t get physical help and didn’t get psychological help.”

Zoukak’s director Omar Abi Azar told Al-Monitor, “We will hopefully work with other prisoners on a different play,” and “We hope to play [“Untitled”] again in Beirut and internationally.”

“Untitled” is a product of a decade-long collaboration between the FLPDS and UMAM. This alliance, starting in 2008 with exhibition on the disappeared in Lebanon’s civil war, has produced performance art pieces and a 2016 documentary titled “Tadmor,” which won multiple international film festival awards.

“The play is the latest product of a very long process,” said Borgmann. She said those involved hope it will bring catharsis to prisoners subjected to torture and enlighten those unaware of what they went through.

“They managed to tell their story, managed to open a more general discourse,” said Abi Azar, adding, “It was powerful to close a chapter in the history of Lebanon that nobody wants to talk about. … We like to open questions but this time we thought, let's fill a gap for once.”