Secretaries of State and Defense, Mike Pompeo and Jim Mattis, urged senators to stay the course on US support for the Saudi-led war in Yemen, but senators said they were inclined to vote for legislation to curtail US support. 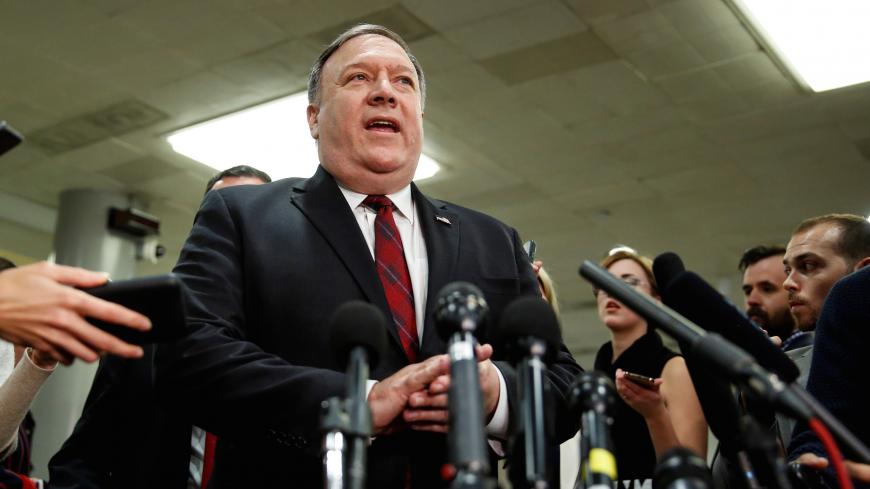 US Secretary of State Mike Pompeo speaks to the media after a closed briefing for senators about the latest developments related to the death of Saudi journalist Jamal Khashoggi on Capitol Hill in Washington, US, Nov. 28, 2018. - REUTERS/Joshua Roberts

WASHINGTON — Secretary of State Mike Pompeo and Secretary of Defense Jim Mattis urged senators at a closed-door briefing today to stay the course on US support for the Saudi-led military coalition fighting in Yemen. But the Donald Trump administration’s refusal to send CIA Director Gina Haspel to brief senators on the intelligence community's assessment of the role of Saudi Crown Prince Mohammed bin Salman in the killing of journalist Jamal Khashoggi, coupled with Pompeo’s urging of business as usual with the Saudis in a poorly received Wall Street Journal op-ed overnight, appeared to backfire. Several senators emerged from the briefing saying they planned to vote for legislation that would curtail US involvement in the war.

It’s “outrageous” and a “cover-up” that the White House refused to send Haspel to join the briefing, ranking Senate Foreign Relations Committee Democrat Bob Menendez told journalists as he emerged from the briefing. "Tells me volumes about what's really going on here.”

"We also have a crown prince that's out of control, a blockade in Qatar, the arrest of a prime minister in Lebanon, the killing of a journalist,” Sen. Bob Corker, R-Tenn., the outgoing chair of the Senate Foreign Relations Committee, told journalists after the briefing. “Whether there is a smoking gun, I don't think there is anybody in the room that doesn't believe he was responsible for it.”

Though Pompeo and Mattis both called for an immediate Yemen cease-fire by all parties to the conflict on Oct. 30, and the State Department reiterated that call last week, they argued in remarks prepared for today’s briefing that the United States should in essence help Saudi Arabia keep the military pressure on Yemen’s Houthi rebels ahead of efforts to bring the parties to the table at UN talks next month.

“Pulling back our limited US military support, our weapons sales to partners and our protection of the Saudi and Emirati populations would be misguided on the eve of the promising initial negotiations,” Mattis said in his prepared remarks to senators, referring to the talks in Sweden that UN Yemen envoy Martin Griffiths hopes to convene next month. “It took us too long to get here, but at this key juncture, a change in our approach would work against Martin’s efforts by bringing new life into the Houthis' combat operations, just as they are reluctantly engaging with the UN interlocutor.”

“This conflict isn’t optional for Saudi Arabia, and abandoning it puts American interests at risk too,” Pompeo said in prepared remarks for the all-senators briefing.

The message to Congress from the Trump administration’s top diplomat and military chief is essentially: Let us continue business as usual with the Saudis in Yemen, and let us handle it.

“We are the one with leverage, but the administration has given it all away,” Riedel added.

Pompeo, asked by journalists after the briefing why the CIA director wasn’t there, avoided saying the White House had made the decision.

“I was asked to be here, and I’m here,” Pompeo said, twice. But he said the United States does not have smoking gun evidence of MBS’ role in ordering Khashoggi’s murder. “There is no direct reporting connecting the crown prince to the order to murder Jamal Khashoggi. And that’s all I can say in an unclassified setting,” he said.

Senatorial frustration is understandable, given that the administration sent Pompeo and Mattis to cheerlead the administration’s policy of status quo with Saudi Arabia, but not an intelligence official who could provide answers to questions not tailor-made to fit the policy, former CIA analyst Cindy Otis said.

Haspel or a senior intelligence community official “could have responded to a number of questions that I am sure came up in the meeting,” Otis, a former CIA branch chief specializing in Europe and the Middle East, told Al-Monitor.

“What senators would want to know is things like, what is the extent of our military support, what has it actually accomplished on the ground. They would also like to know about the effects of the humanitarian crisis and whether US military involvement has played a role in worsening that,” Otis said. “That is something CIA would be able to respond to.”

“Pompeo is a policy guy, he is pushing the White House agenda,” she said. “I think they [the senators] know he will toe the line of the White House regardless of the reality on the ground.”

US military chiefs like Mattis, meanwhile, have a tendency to want to continue the status quo, Otis said.

“The military in particular has a long history of getting trapped into continuing policy decisions or operations. … Look at Afghanistan, for instance,” Otis said. “Every sort of SecDef or ComISAF or Centcom commander will say, we need to keep my war, because I have a new idea for it. … No one wants to admit it is a funk war.”