Misconceptions have led to fear of the striped hyena, the national animal of Lebanon, and the shy creature is often illegally hunted despite the key role it plays in the country's ecosystem. 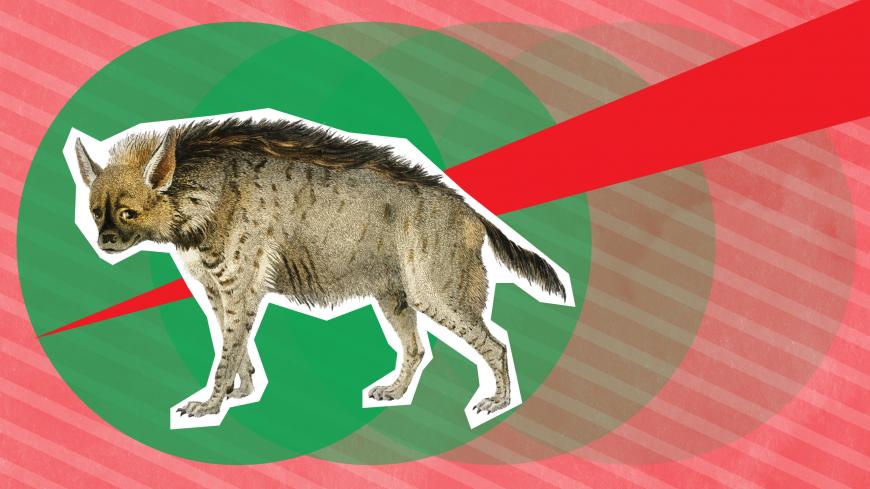 BEIRUT — Hyenas are usually associated with the plains of sub-Saharan Africa, not the mountains of Lebanon. However, the striped hyena is not just a native species to Lebanon, it is the national animal. Yet the hyena is still hunted and misunderstood, weathering hostility while cleaning the country they represent.

The striped hyena, unlike its spotted cousin, is small, around the size of a German Shepherd, with a passive and solitary nature. They can be found near villages but are more interested in the garbage the population produces then the people who live there. Yet hyenas are still killed by poachers and viewed as a dangerous predator by many.

“What is frustrating to us is that you have a beautiful species in this country that deserves to be protected and does not cause any harm,” Jason Meir, the director of Animals Lebanon, a non-governmental group that campaigns for animal rights and welfare, told Al-Monitor. Still, “you are still seeing hyenas being killed and photos [of this] being posted on social media.”

Despite the hunting of hyenas being illegal, Meir explained that “compliance with laws is not 100% … if someone wants to take his gun and go shoot there is not a lot we can do.” This situation led to the striped hyenas being declared a near threatened species in 2008.

Animals Lebanon has cared for 10 injured hyenas since the organization opened in 2008. The young hyenas who survived the initial days after being rescued have all lived into adulthood.

While most of the hyenas that came to Animals Lebanon did so as a result of hunting, the organization has also saved animals that were being kept in pet shops or as entertainment for parties.

Animals Lebanon worked closely with Animal Encounter, a Lebanese wildlife advocacy group, to save a hyena who was trapped in a cage above the dead body of her brother at an estate in the south Lebanese town of Sidon.

Animal Encounter also cares for injured animals and currently has two hyenas at its sanctuary in the town of Aley outside Beirut. Director Mounir Rachid Abi Said, who is an associate professor at the Lebanese University Faculty of Science, told Al-Monitor that one of the hyenas was born and raised at the center. He was born just weeks before the outbreak of the 2006 war between Israel and Hezbollah, so he could not be released and never learned how to survive in the wild.

The other hyena was found earlier this year in a hunting trap with his sibling, who had been beaten with a shovel and died shortly after being rescued. However, after intense rehabilitation, the survivor will be released back into the wild within the next few months.

These examples of abuse are a product of the misconceptions and fear that surround the hyena, despite the key role they play in Lebanon’s ecosystem.

Abi Said has been studying the striped hyena since 1993 and conducted the first study of the animal in the Arab region. He documented the effects of urbanization on the animals and how they can prevent disease.

“[Hyenas] are scavengers and rely on dead animals and garbage … They are good recyclers,” Abi Said explained. He added that hyenas do not only reduce waste in a country going through a severe trash crisis, but they also eat other dead animals potentially carrying diseases, reducing the likelihood of epidemics.

Hyenas are naturally attracted to the waste humans leave behind and avoid the large, clean and uninhabited nature reserves of the Chouf mountains. They instead favor smaller reserves, such as north Lebanon’s Jabal Moussa, which is surrounded by villages. However, their presence often angers the local population.

“Our conservation efforts are sometimes criticized by locals because people think we are feeding the hyenas. … They call them monsters,” Joelle Barakat, conservation manager at the Association for the Protection of Jabal Moussa, told Al-Monitor. The group has begun to conduct workshops to educate people on the natural role and need for hyenas. Animal Encounter runs similar workshops.

Such initiatives have made headway in addressing the misconceptions about hyenas over the past few decades, said Abi Said, explaining, “There has been a big change. The media at first talked about the animals very negatively. Now that has changed to the other side.”

However, a lack of information on the striped hyena makes conservation work difficult. Animals Lebanon has run into this issue in their own advocacy work, as Meir explained there are no statistics available on how many hyenas live in Lebanon, nor on how many are killed by hunters. The situation is bound to worsen as changes in Lebanon's environment forces hyenas and humans closer together.

Mier pointed out, “Most of these animals just want to be left alone. But this is a very densely populated country and there isn’t much room for wildlife left. And when you have all this trash left out everywhere, you're essentially calling these animals into towns and cities.”

Meir added, “On a cultural level, whether it be a hyena or a stray dog or a fox or a jackal, wild animals are somehow something to be persecuted, and if you can kill it, that is somehow better then coexisting. But that is to everyone's detriment in the long term.”

After three decades of studying hyenas, Abi Said shares this sentiment: “Animals adapt to humans. But humans don’t adapt to animals. And that is a big problem.”