The Israel Electric Corporation's announcement that it will refrain from cutting off power for delinquent Jewish customers during the Jewish holidays marks another insidious ripple effect of the discriminatory nationality law. 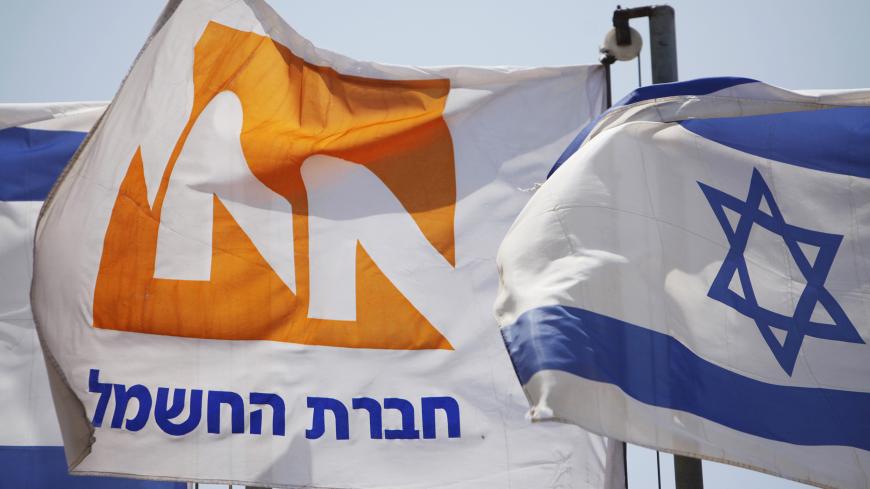 The logo of the Israel Electric Corporation is seen on a flag next to the Israeli national flag at a power station in Hadera, Israel, May 19, 2012. - REUTERS/Amir Cohen

The Israel Electric Corporation has announced that it will suspend power cutoffs of delinquent Jewish clients during the eight-day Hanukkah holiday in the first week of December. The decision may have been made in good faith and not tinged by racism. It quite possibly may have been designed to enhance the IEC's tarred image. However, these days, since the passing of the nationality law that provides the state’s Jewish majority with a clear advantage, any differentiation on the basis of religion or ethnicity can be presumed to be motivated by racism.

The IEC's festive Nov. 29 announcement said customers “in the Jewish sector” in arrears with payment would be exempt from power cutoffs throughout the Hanukkah holiday, also known as the festival of lights. The fact is that this public relations ploy isn't as big a gesture as it seems. The reprieve is not really for eight days, since the IEC does not operate on weekends, and the holiday “bonus” for delinquent customers will enable company employees to take time off.

The power company’s announcement was met with surprise and anger. The nationality law anchors the Jewish nature of the State of Israel and even welcomes the establishment of Jewish-only communities. Has the preferential treatment of Jews spread to such an extent that it favors Jews in enforcing the law?

In the wake of public outrage, the IEC was quick to clarify that it does not discriminate against any of its clients and it treats non-Jews the same way during their religious holidays. That’s interesting, given that all the Abrahamic religions celebrate holidays in December, some almost concurrently: Hanukkah, Christmas and Eid al-Adha, the Muslim Feast of Sacrifice. Nonetheless, the IEC did not promise to provide light to all its customers in December so as not to mar their holiday joy.

In a bid to deflect criticism, the IEC spokesperson pointed to a July 2016 Haaretz report that quoted the company as saying, “We will not cut off Muslim debtors if we can identify them.” The spokesperson failed to mention that the article was not about the IEC's initiative to offer its Muslim clients a benefit, as it did for the Jewish clients for Hanukkah. The company's statement was made in reaction to a bill proposed by Knesset member Ilan Gilon of leftist Meretz who sought to promote legislation banning water and power cutoffs to Israelis in payment arrears. His bill was defeated, and so Gilon appealed to the IEC to avoid cutting off its Muslim clients at least during the holy month of Ramadan. The company promised it would not disrupt power to communities with a large Muslim population, but explained that since it does not keep data about its customers’ religion, any members of the Muslim faith who are “candidates” for a cutoff should declare themselves. Interestingly, no members of the Jewish faith have been asked to identify themselves in similar fashion.

The Knesset authors of the nationality law rejected claims that it would cause significant damage to Israeli society and its cohesiveness. Yet the spirit of the law is spreading to every domain. As 2018 draws to a close, the Judiazation of Israel is glaringly obvious. Judaism is clearly the preferred nationality in Israel, granting its adherents priority in all matters. Anyone who is not of the faith or perceived as a non-Jew is denied equal standing in the Jewish State. When the government demands exclusive loyalty to Judaism-based culture, it is no wonder that the limits of the nationality law are stretched to include the Jewish holidays.

The effect of the law was revealed in all its ugliness during the campaigning leading up to the Oct. 30 municipal elections throughout Israel. In mixed Jewish-Arab towns including Haifa, candidates promised their voters “Arab-free” towns or pledged to publish lists of Arab-owned businesses. That one was intended to help Jews avoid Arab-owned shops.

The cloud of the nationality law did not disperse after the elections. At the first meeting of the newly elected municipal council in the northern town of Afula, for example, council members swore to uphold their town’s Jewish character. What they meant was clear. They were not expressing a desire to preserve a unique culture or to strengthen a tradition at risk of extinction. They simply conveyed a message that non-Jews are not welcome in Afula.

On Oct. 10, the wedding of two celebrities — Muslim Israeli television presenter Lucy Aharish and her Jewish partner, actor Tzahi Halevi — caused an uproar. Knesset members and government ministers spoke out against this “marriage of assimilation.” Interior Minister Aryeh Deri, leader of the ultra-Orthodox Shas party who expressed backing for the pledge of allegiance by Afula’s council members to their town’s Jewish character, claimed that “such things” should not be encouraged in order to preserve the Jewish nation.

Deri's response provoked yet another wave of reactions. Television viewers sent Aharish messages complaining that she “dared” start her program with a good-evening greeting in Hebrew and “masa alkhayr” in Arabic. Arabic, after all, is the language of the enemy, and with everyone talking about the state’s Jewish character, it isn’t nice to hear Arabic in Jewish viewers’ living rooms.

The couple came up with an original response to the protests, putting the words of one of the complaints to music in a song Halevi sang on the air: “Shalom, at the start of every program, Lucy says her words in Arabic, too. This is inappropriate and harsh-sounding. The fact that she’s an Arab does not give her the right to greet in Arabic. Her managers should reprimand her and tell her to stop this habit she herself created.”

Deri and other right-wing politicians were quick to express their rejection of the marriage of a Jew and an Arab. But these same politicians kept quiet this week over a similarly sensitive story in Israel. Neither Deri nor other politicians on the right said a word when world-renowned film director Quentin Tarantino, a non-Jew, married his sweetheart, Jewish Israeli singer Daniella Pick. Apparently, as long as Tarantino is not an Arab, he is no threat to Israel’s security.