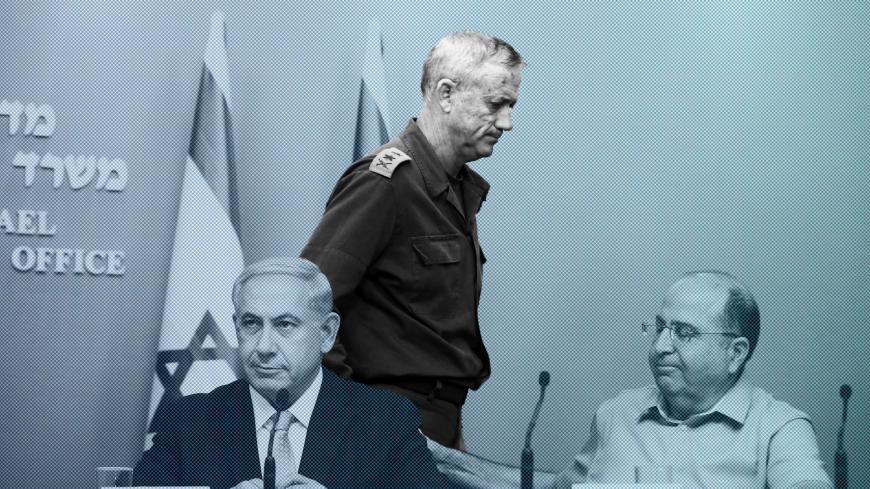 So far, Prime Minister Benjamin Netanyahu has made a point of not attacking former Chief of Staff Benny Gantz, whether directly or indirectly. He has stuck with it while Gantz began to rise in the polls over the last few months, and even though he is taking a bite out of the bloc of less committed Likud supporters. “He’s good for us,” people close to Netanyahu told Al-Monitor on condition of anonymity when asked about Gantz’ rise. They explained, “As long as he runs alone, he just ends up splitting the left. Even if he does win seats from the Likud, it will not change the bigger picture.”

So far, Netanyahu himself has been behind this policy of ignoring Gantz. But all that finally came to an end this week when a Channel 10 poll showed Gantz winning about 15 seats. Another poll, this one by Hadashot, made matters worse, asking, "Who would you like to see as defense minister?" It gave Gantz a significant edge over Netanyahu (28% to just 7%) on the very day that the prime minister officially took over as defense minister, following Yisrael Beitenu head Avigdor Liberman’s resignation.

Gantz has not yet officially announced that he will launch a new party. He has remained silent about his plans, leaving the feeling that all options are open to him, including the possibility of joining one of the existing center-left parties. On the other hand, the more flattering the polls are to him, the greater his appetite will become. In other words, the chances of him joining an existing party before the next election are dwindling.

Netanyahu knows how to read between the lines. He has a deep understanding of trends in the polls, regardless of whether the results are made public or if they are gleaned from privately ordered surveys. He certainly knows that his image as Mr. Security suffered a devastating blow as a result of recent events in Gaza. The trouble came to a climax last week, when Netanyahu came under a barrage of criticism from the leaders of the other right-wing parties. Liberman resigned and while Education Minister Naftali Bennett (HaBayit HaYehudi) may have remained in the government, he thinks that Netanyahu failed.

As a former IDF chief of staff, Gantz is no less a security expert than Netanyahu. On the other hand, he is not tainted by corruption and is regarded by the public as a suitable candidate. Even when Netanyahu was at his lowest point in the polls, there was no one who could challenge his high levels of public support or question his suitability as prime minister or “Mr. Security.” Gantz can.

When Gantz broke his long silence, he completed the image that the public was seeing at home that night. His comments on responsible leadership were quoted extensively on the evening news. Among other things, he called on the country’s leaders to “avoid taking advantage of this just and essential war of defense for personal or political gain," and said, "It is important to engage in a firm and clear-headed policy that bolsters the State of Israel’s strength.” He went on to talk about a cohesive society and a government that serves the people, about equality and hope. It set off all the alarms in the prime minister’s office that a new threat was emerging right before his eyes.

Then came the morning after, when Culture Minister Miri Regev gave a television interview. Her offensive and toxic comments about Gantz could hardly be attributed to chance.

Viewers were dumbfounded when Regev responded to a question about the former chief of staff and how he was soaring in the polls. She accused Gantz of being indirectly responsible for the death of a child in August 2014, during the final days of Operation Protective Edge, when a mortar shell hit his home on Kibbutz Nahal Oz. “We all remember Gantz as chief of staff,” she said. “The final chord of his tenure as chief of staff was when he told Israelis 'go out to pick anemones' and Daniel Tragerman was killed. The only ones who can lead the security policy are the Likud Party and Netanyahu," she concluded.

Regev was referring to Gantz’ comments after a cease-fire has been reached with Hamas. In remarks later known as the “Anemone Speech,” he called on the residents of the south to return to their homes: “The fields will turn green and the south will be awash in red — in the positive sense of the word — in anemones, flowers and stability, which will be here for many years to come.”

Even if Regev’s comments weren’t coordinated with Netanyahu word for word, they reflected the new mood coming straight from prime minister’s office: As of this week, Gantz is the enemy. That was why Regev refused to take back her remarks, saying instead on Facebook Nov. 21, “To all those with a short memory who try to keep this delicate new fruit all wrapped up in cotton balls, I am here to remind you of what you are trying to forget.”

There can be no doubt that Regev is the songbird whose chirping announces open warfare against Gantz as long as the polls perceive him as a real threat, the country’s best hope or the next “Mr. Security.”

Tthis is only the beginning of Gantz’ worries. So far, he has not aligned himself with any existing party. If he continues along this path, he is bound to face many rivals, including from members of his own center-left camp.

Furthermore, if Gantz runs as the head of his own party, he would effectively lay waste to Yesh Atid, which would only win some 12 seats (polls now give it 18-20 seats), while the Zionist Camp would drop to just 10 seats. He would also take seats from Finance Minister Moshe Kahlon’s Kulanu, which would hover on the electoral threshold with just four seats.

Neither Lapid nor Zionist Camp head Avi Gabbay will sit twiddling their thumbs once Gantz announces he plans to run. They will accuse him of tearing the center-left apart and claim that Netanyahu will win the election all because of him. In that sense, Regev's vitriol is just the beginning.

Over the last year, Lapid invested enormous efforts into courting Gantz to fill the number-two slot on his party’s list. He failed. He also has no plans to evacuate his seat and his party’s number-one slot for Gantz. Meanwhile, senior members of the Zionist Camp have attempted to go over Gabbay’s head and recruit Gantz to replace him as party leader. Their efforts were similarly futile. Gabbay will not surrender his position so easily. So far, all of this seething on the ground is causing Gantz to distance himself from the existing parties and consider running independently.

When a senior member of Yesh Atid ran into Gantz two weeks ago, he told the former chief of staff that he is making the mistake of his life by not the joining the party as Lapid’s number-two man. “Why would I?” Gantz supposedly answered. “I haven’t said a word, and I’m still climbing in the polls.” He was met with the response, “You’ll see soon enough. Once they dig your Anemone Speech out of the archives and start playing it on a loop, you won’t be able to stay quiet much longer.” What the Yesh Atid member didn’t realize was that it all would happen so soon.