Gaza, Israel: They call this a truce

While Egypt continues to mediate a truce between the Gaza Strip and Israel, both sides continue their attacks, considering each assault "retaliation" for the other side's volley. 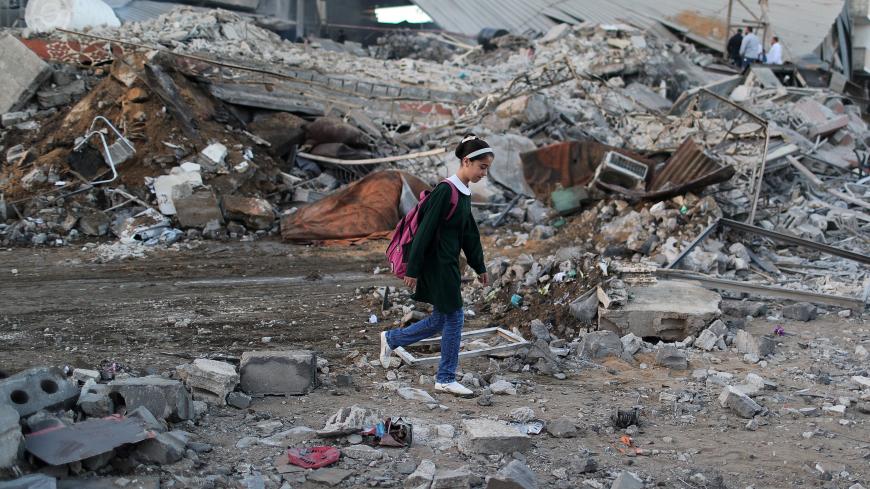 A Palestinian schoolgirl walks past the scene of an Israeli air strike on a building, Gaza City, Gaza, Oct. 27, 2018. - REUTERS/Mohammed Salem

GAZA CITY, Gaza Strip — Egypt mediated a truce between the Gaza Strip and Israel on Oct. 27. The next night, Israeli airstrikes killed three teens in the Gaza town of Qarara.

Palestinians in Gaza took to the streets demanding that Palestinian military factions avenge the deaths of the boys, identified as Khaled Saeed, 14; Muhammad al-Satari, 13; and Abdul Hamid Abu Dhaher, 13.

But the boys were neighbors who lived just a mile away from the post, near the rural border of Deir al-Balah. Saeed’s mother told Al-Monitor that her son “only cared about raising sheep and birds, and he was placing the net at night to trap birds in the morning and sell them later on."

"This is when the Israeli aircrafts targeted him without checking what he was doing!”

Palestinian Islamic Jihad spokesman Daoud Shihab told Al-Monitor, “The occupation is fully to blame for such a hideous crime." He added, “The resistance reserves the right to retaliate."

Commenting on the Israeli army’s explanation, Shihab said, "The occupation is telling a misleading narrative. These children have nothing to do with any military action.” He added, “Innocent blood was shed so that the criminal army muzzles voices critical of its failure in countering the marches of return."

The fear that a potential retaliation will ignite a new confrontation prevails. This is true particularly since the Palestinian Islamic Jihad had launched a barrage of rockets at Israeli settlements next to the Gaza Strip on the night of Oct. 26, in retaliation for the killing of five Palestinians in the weekly marches of return. The Friday marches have been going on since March 30.

"The [Palestinian Islamic Jihad] movement retaliated [Oct. 26] for the killing of unarmed protesters, in accordance with a Palestinian consensus and factional support," Shihab said. Regarding the attack that killed the children: "We haven't made the decision to retaliate unilaterally," though it has been discussed.

Hamas and the Commission of the Great March of Return have taken steps to reduce violence during the Gaza border protests. These have coincided with the Egyptian-mediated, indirect talks between Hamas and Israel. The measures include canceling the weekly protests near the Erez crossing and easing the protests near the Zikim army site, in the northern Gaza Strip, which erupted in September.

Speaking to Al-Monitor, a Hamas source said, “The youth protesters are instructed not to approach the border, so Israel won't have an excuse to target protesters and escalate the situation in the Strip.” Young people have been known to throw flash grenades and storm the gate to the Zikim military site, but that wasn't the case this time.

The source added that in the past two weeks, “measures to protect protesters were taken, as Hamas members in civilian clothes were deployed to stop protesters, particularly children, from approaching the border.”

The source went on to say, "Prior to the latest escalation, preachers at the mosques called on demonstrators to be prudent, to avoid casualties during the protests.” Yet the masses continued to advance toward the border fence and clashes intensified on Fridays, violating the instructions.

Avichay Adraee, the Arabic spokesman for the Israeli army, tweeted Oct. 19, “One hour ago, 10,000 partakers in the violent riots at the Gaza Strip security barrier were dispersed. … Unlike the previous weeks, the majority of rioters remained in the [back] and did not seek to come to the barrier. Hamas took actions to control the situation on the ground.”

Political analyst Talal Awkal told Al-Monitor, “On the past two Fridays, Hamas worked on easing [any kind of tension] at the marches of return. Yet Israel had heavily fired bullets Oct. 26, purposefully to maximize the number of wounded and martyrs. This is deemed a violation of what both parties have agreed upon via an Egyptian mediation.”

As Hamas recently finds itself in the unusual position of peacekeeper, Palestinian Islamic Jihad has assumed the role of retaliating when Palestinians are killed — especially when mediators ignore the deaths. Israel tends to blame Hamas for launching rockets, but the other factions are making themselves known.

Awkal explained, “Hamas is leading the political action in the Strip. The rest of the factions are being disregarded and are not being talked to. Yet they were present at the Oct. 24 meeting with the Egyptian delegation, after Hamas had demanded that the rest of the factions join, for them to be kept in the loop.”

He believes this effort to include the other factions will help Hamas improve negotiating conditions with Israel.

Commenting on the killing of the three children, he said, Israel "adjusts" the rules of engagement at its convenience. "The Israeli leadership is trying to improve its bad image in the eyes of its people." But it thought it could avoid criticism and get by with attacking Gaza that night because "it thought the factions wouldn't retaliate while the Egyptian delegation was there" in Gaza.

When retaliation comes, Awkal predicts it will be "in the form of high-caliber protests … by popular demand. Hundreds of Palestinians have taken to the streets, demanding retaliation.”

Journalist Mustafa al-Sawaf told Al-Monitor, “Israel is trying hard to end the marches of return. It has become aware that the popular movement will only stop once the blockade is lifted off the Gaza Strip.”

He added, “The Commission of the Great March of Return seeks to preserve the popular marches’ momentum until its objective [lifting the siege] is achieved. The occupation knows very well what should be done to end this movement."

Nevertheless, will Hamas change the rules of the game? Hamas spokesman Fawzi Barhoum said in an Oct. 27 statement, "The latest Israeli attack on Gaza will set the mechanisms to deal with the Israeli occupation, as we will not stand idly by while the Israeli occupation continues to target unarmed protesters and the resistance’s infrastructure to fuel the Israeli parties’ rivalry and export [their] internal crises to Gaza."

“This aggression will determine the way to deal with the occupation on the ground in the future. We will not allow the Gaza Strip, the bloodshed of unarmed protesters and the resistance's capabilities and sites to continue to be used [as leverage] in Israel’s internal rivalries.”