Will Iraqi provincial councils be abolished?

Amid calls for abolishing provincial councils in Iraq, provincial elections have been delayed for the second time. 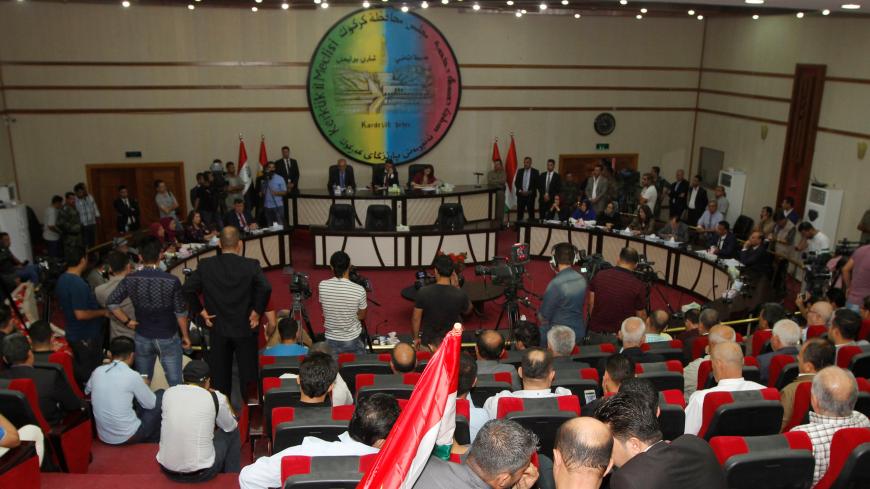 BAGHDAD — The Iraqi parliament lifted the freeze on the Independent High Electoral Commission (IHEC) Nov. 10, over two weeks after provincial elections were scheduled to be held. Now, the fate of the provincial councils is once again at the center of debate in Iraq.

Parliament formed a commission on May 12 to investigate suspicions of fraud in the general elections. The IHEC’s work was frozen and placed under the tutelage of the judiciary.

Provincial elections were scheduled for Oct. 22 but were postponed for many reasons. IHEC chairman Maan al-Hitawi mentioned a few, stressing that “the IHEC requires a bit a time following what happened in the parliamentary elections. We need to issue new cards for voters and purchase new equipment to replace those that were burned in the IHEC warehouses in Rusafa in Baghdad.”

However, parliament did not officially postpone elections, and no date has been set for them, although the four-year mandate of the current provincial councils ended in June 2017. Thus, the extension of the provincial councils is unconstitutional. There is no constitutional loophole that would allow parliament to regulate the work of these councils, but parliament is in the process of amending the election law to set a new election date.

In this context, the IHEC announced Nov. 13 that Prime Minister Adel Abdul Mahdi was willing to cooperate and provide what is necessary for the success of the upcoming provincial elections and set a new date. Meanwhile, parliament noted that it received a request from 52 parliamentarians to amend the law on provincial elections.

IHEC spokesman Karim al-Tamimi told Al-Monitor, “The IHEC has already begun to discuss the mechanisms of issuing the voter cards and updating the voter lists in preparation for the elections,” noting that “the competent committees and departments have submitted their plans for said elections.”

Tamimi added, “The IHEC is in contact with the relevant committees in parliament to agree on the new date in virtue of the election law, which will be issued by parliament in the coming period.”

Mansour al-Mareed, a parliamentarian for al-Nasr Alliance, told Al-Monitor, “There is a possibility of setting the date for provincial elections in the next six months, in order to give the IHEC the time it needs to finish all technical and logistical preparations and organize the elections successfully.”

Mareed added, “Parliament will discuss the amendment of the electoral law in order to set a new date by referring to the IHEC since it has resumed its work and is waiting on allocations from the budget for 2019.”

“This proposal will be discussed in coming parliament sessions so a final decision can be taken,” he said. “The government is obliged to implement this proposal if it was approved unanimously by parliament.”

Abolishing provincial councils seems unlikely since they are “constitutional” councils, as stipulated by the Iraqi Constitution of 2005. Amending the constitution seems impossible given the major disagreements over most of its articles, especially on the disputed areas between Baghdad and the Kurdistan Regional Government (KRG). In addition, the mechanisms of amendment are complicated and political circles are not willing to provoke further conflicts now.

However, in light of demands to reduce state expenditures and address chronic “slack” in public institutions, parliament was able to amend the law on “provinces in the KRG” and abolish “district councils” in May. It also reduced the number of provincial council members in an implicit recognition of the failure of these councils to achieve decentralization stipulated by the constitution, as well as to underline their inability to achieve the expected development of them in various areas since their powers contradict with the federal authorities.

Perhaps this is due to the country's administrative experience, which did not exist before 2003. It could also be the result of the many political and security crises plaguing the Iraqi regime in general.

The most appropriate solution to this crisis may be a partial amendment to the constitution that includes abolishing provincial councils only, with the direct election of governors by citizens, leaving other issues to be amended later on.