Iraq's new prime minister is making the economy a priority, but some question whether he will be able to tackle longstanding roadblocks that threaten his plan's success. 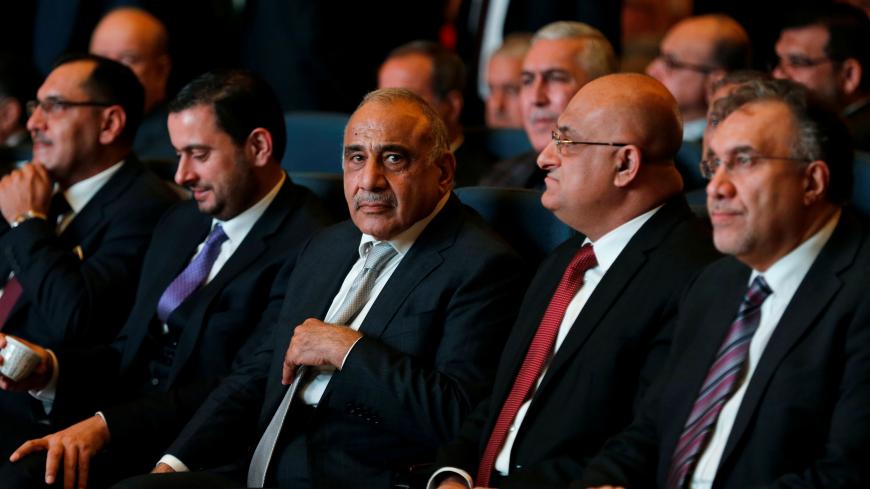 Abdul Mahdi, who was sworn in Oct. 24, has held important economic positions in the past. He was Iraq's finance minister in 2004 and oil minister in 2014. In articles he published in his Al-Adala newspaper, he portrays himself as an economist capable of addressing the country's crises.

His ministerial platform focuses on 15 points to stimulate the investment environment, aid the market economy, develop the oil industry and find international sources of funding to support more than 100 national development projects.

Mahdi also hopes to achieve sustainable development in the tourism sector and reach self-sufficiency in the agriculture and livestock sectors. His plan calls for strengthening partnerships between the public and private sectors while also securing partnerships with international companies.

Other goals he outlined include increasing the electricity supply by 11,000 megawatts, exploiting associated gas and finishing the Karbala refinery by 2021.

However, the challenges lying in store for Abdul Mahdi are daunting. Iraq’s state institutions suffer from rampant financial and administrative corruption, which is why the country ranks 169th out of 180 countries in the Transparency International Corruption Perceptions Index.

What's more, political parties have been controlling some ministries through economic committees they have created in a bid to steer funds to their parties. Then there are major economic disagreements between Baghdad and the Kurdistan Region.

And then there's the budget.

Al-Monitor attended a Nov. 6 news conference at which Majida al-Tamimi, a prominent economist and a parliament member with the Istiqama Party, said while parliament voted to approve Abdul Mahdi's platform, "This program was not reflected in the draft budget of 2019.”

"The philosophy and vision of the state should be conveyed by the financial budget, but this unfortunately was not the case," she said, also noting the lack of economic reforms to help the public directly. "Some people still get double and triple salaries amounting to 80 million dinars per month [$67,000], while many Iraqis struggle to earn $1 due to unemployment and poverty.”

Unemployment and poverty rates in Iraq are very high — more than 20% — and there are ongoing public demonstrations in the south to protest poor services and unemployment.

"Investment in Iraq suffers from a major imbalance. When investors embark on new projects, they tend to use the state funds as capital instead of their own, and they use plots of land belonging to the state," Tamimi said. “The 2019 draft budget cannot be passed without the government amending it in a way that fits the government program."

“Abdul Mahdi is a veteran economist capable of promoting the economy and solving the problems plaguing citizens, and his economic program is an ideal solution to the problems of the economy," Alaa al-Rabih, a member of the Sairoon bloc, told Al-Monitor. “If well-implemented, the economic program will create thousands of job opportunities, stimulate the industrial and agricultural sectors, and activate investment."

He added, “The main problem facing Abdul Mahdi is bureaucracy, and financial and administrative corruption."

Bassem Jamil Antoun, deputy chairman of the Iraqi Economists Association, told Al-Monitor, “Abdul Mahdi’s economic program will require effective tools, including an honest administrative body with a real will to bring about change.”

He added, “The new government program is part of the program of the previous government, which was headed by Haider al-Abadi. Abadi’s economic program had failed due to corruption, bureaucracy, the administrative structure of state employees, who total 4.5 million, and parliament’s weak oversight.”

It should be noted that the International Monetary Fund suspended negotiations with the Iraqi government for more than a year as it awaited the new vision of Iraq's next government, which has turned out to be Abdul Mahdi’s. Negotiations to address the Iraqi economy are to resume in the coming months in Washington and Amman, Jordan.

Asked to comment on Abdul Mahdi’s economic program, economic researcher Salam Adel told Al-Monitor, “The aspects of the new government program have started to surface and are no different than those of previous governments.”

He said, “The problem in Iraq lies in the public sector, which siphons 90% of the country’s oil proceeds and creates obstacles for the private sector. ... Iraq needs to get rid of [some] public sector employees, because it's not reasonable for the state to pay more than $35 billion a year in salaries to employees with very poor productivity.”