Iraq's 2019 draft budget is the target of major criticism by the Iraqi governorates and Kurdistan Region for not fulfilling their needs and demands. 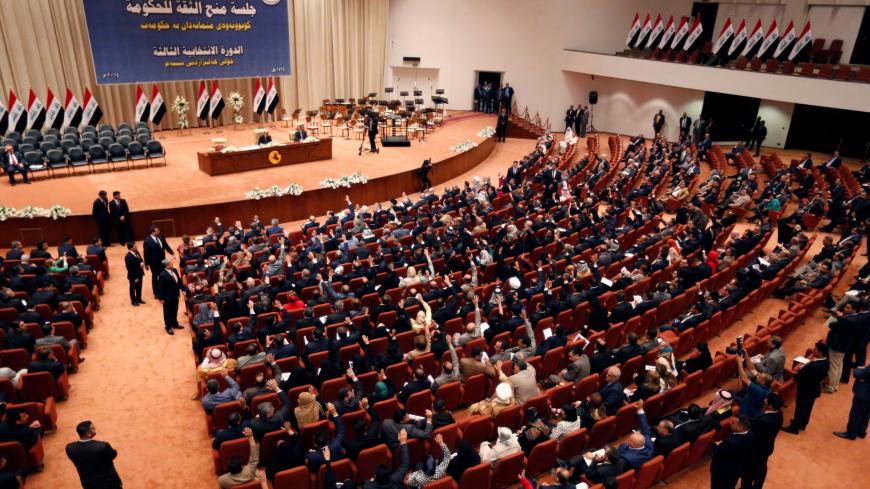 Members of the Iraqi parliament gather to vote on Iraq's new government at the parliament headquarters in Baghdad, Iraq, Sept. 8, 2014. - REUTERS/Thaier Al-Sudani

Iraq’s draft federal budget for 2019, which parliament has yet to pass, ignited major disapproval among the country’s political parties, as well as in the governorates and the Kurdistan Region of Iraq.

Following dwindling oil prices, the war against IS and the subsequent years of austerity, the proposed budget for 2019 is considered “explosive” due to the huge sums involved: It amounts to nearly $107 billion, with an estimated deficit of $19 billion.

Iraq’s oil revenues cover 88% of the draft budget. Oil prices are estimated at nearly $56 per barrel, and Iraq exports an average of 3.8 million barrels per day from its oil fields, including those located in the Kurdistan region.

Such a figure is huge compared to previous budgets, particularly since important aspects of reconstruction and infrastructure development are overlooked in the draft budget, Iraqi parliamentarians said.

Most of the political blocs, with their various religions and ethnicities, have rejected the draft budget, stating that it has not taken seriously the provision of services to citizens.

Sabah al-Uqaili of Muqtada al-Sadr’s Sairoon Alliance said, “The northern and southern governorates, as well as the Kurdistan region, disapproved of the draft budget.” He told Al-Monitor that “the draft budget did not reflect the identity of the new government, led by Adel Abdul Mahdi. It was drafted while Haider al-Abadi was ending his term. Based on that, it does not include the program of the new government which won parliament vote.”

In fact, Abadi’s government prepared the federal budget for 2019. After Abdul Mahdi’s new government won the parliamentary vote, the latter submitted the draft budget to parliament on Oct. 28 for a vote. It was soon rejected.

Rebwar Taha, a member of parliament from the Patriotic Union of Kurdistan, also stated that the draft budget does not serve the new government's program. “The program of Abdul Mahdi’s government cannot be put into action with the current draft budget,” he said.

Taha said “there is a key defect in the budget” and pointed out that “it is an operational budget rather than a budget focusing on investments and the provision of services to citizens and on easing tension in the street.”

“The shares of the governorates and the Kurdistan region are unbalanced and illogical compared to the population,” he added.

Similar to the past year, Kurdistan's share of the federal budget for 2019 has remained at 12%, causing resentment among the Kurdish blocs, particularly since it amounted to 17% for years in the past.

In contrast, the Basra governorate, which did not previously earn the petrodollars, namely $5 per barrel sold from the Basra fields, believes that the federal budget continues to be unfair. This is true particularly since the provision of services in Basra has never been worse. Over the summer, the tension climaxed in the streets, generating violence and mass protests.

The budget allocations have furthermore created a feeling of injustice in the governorates that have been freed from IS, such as Ninevah. Destruction hit between 60-80% of the governorate, which was not allocated more than 1% of the draft federal budget for 2019.

He noted, “No political attention is given to the Ninevah governorate,” adding that “the afflicted governorate is being deliberately neglected.”

Jarba belives Abdul Mahdi has two options: The first “is that parliament adds amendments to the federal budget and demands that the prime minister approves it instead of challenging it in the federal court.” The second is that “parliament refers back the draft budget entirely to the government and prepares a new budget based on Abdul Mahdi’s government program, which parliament approved.”

Both Uqaili and Taha agreed that another solution would be to form a joint committee between parliament and the Cabinet to amend the draft budget.

Uqaili said, “There is a tendency to form a joint committee between the parliament and Cabinet to examine the Iraqi budget for 2019 and add new items in a way that is in line with Abdul Mahdi’s government program.”

He said, “The shares of the Ninevah, Anbar and Basra governorates of the budget for 2019 are being debated to be altered,” adding that failing to address “the allocations crisis will trigger major reactions in parliament" from Ninevah and Basra parliamentarians.

Relations between the Abdul Mahdi government and parliament are being tested for the first time. The same applies to the governorates lacking services. In case the government decides to remain committed to the 2019 draft budget, major crises with parliament await.