Will Iraqis get green light to enter restricted Green Zone?

Iraq's new prime minister wants to lift at least some limits on entering Baghdad's Green Zone, but he is likely to face strong opposition from politicians and foreign diplomats there. 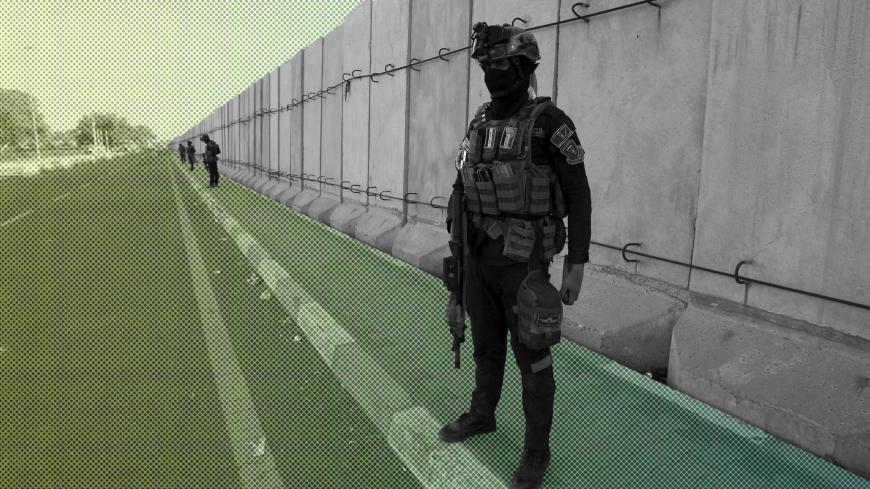 BAGHDAD — While new Iraqi Prime Minister Adel Abdul Mahdi has promised to open Baghdad's fortified Green Zone to the public and to through traffic, there are doubts that he will be able to fulfill that pledge.

The Green Zone, officially the International Zone, is a 4-square-mile area that's home to Iraqi government buildings for the presidency, parliament, judiciary and the intelligence and national security staffs. Also located there are various foreign embassies, including those of the United States and the United Kingdom; other diplomatic missions; offices of international organizations, notably the UN; and residences of privileged Iraqis and high-level officials.

The restricted zone inconveniences many Baghdad residents, especially commuters. Opening the area could reduce heavily congested streets and slash the amount of time it takes to travel across town. It would also make it easier for citizens to access government agencies.

In addition to opening up the area, Abdul Mahdi wants to get "closer" to citizens by relocating with his Cabinet to a building outside the zone. In fact, on Oct. 25, Abdul Mahdi and his incomplete government met there, marking the first time a session has been held outside the Green Zone since 2003.

The building isn't far from a street vendors' area and the infamous garage where, in 2004, relatives of then-Prime Minister Ayad Allawi were kidnapped. The area isn't as fortified as the Green Zone, but is surrounded by cement blocks and a number of security people.

Some people in the area reject the idea of having a potential target — a government office — in their midst, but Abdul Mahdi tried to reassure Iraqis that having the government headquarters there, along with a stable security situation, are beneficial. That assessment of stability, however, contradicts recent security warnings, including one issued Nov. 6 by the US Embassy in Baghdad that "unspecified militia leaders have discussed plans for kidnapping US citizens attending the 45th Baghdad International Fair," set for Nov. 10-19.

Opening the Green Zone to public scrutiny could also prove embarrassing to politicians and officials who live in such a fortified, restricted, safe area. But Abdul Mahdi says his goal is to make the whole country safe. “We want to consider all of Iraq to be a green zone,” he said during his first official news conference.

The new prime minister is also likely to feel pressure from diplomats, especially those in the US Embassy, who might fear attacks on their headquarters should the area be opened up, according to security expert Hisham al-Hashimi, who said a US Embassy representative has spoken with Abdul Mahdi.

"Americans told Abdul Mahdi that it's necessary for him to provide them with protection to prevent any attacks," Hashim told Al-Monitor. The embassy already has security walls, and Abdul Mahdi "will somewhat isolate the US Embassy by surrounding it with cement blocks."

He added, “Abdul Mahdi moved the new Cabinet headquarters 100 meters [109 yards] from the Green Zone, which means 100 meters closer to the people. [But] this is not what citizens want. They are demanding real changes in terms of services and care."

Former Prime Minister Haider al-Abadi faced the same pressures when he wanted to open the zone.

Abadi promised Nov. 11, 2014, to open parts of the Green Zone. About one year later, one street was opened on the northern side of the Green Zone, but people were not allowed in on foot, only in vehicles heading directly to the exit in the southern part of the area. Even that street is closed now. That's why some civil activists have been questioning Abdul Mahdi’s ability to deliver on his promise.

Hamid Jahjih, one of the activists, told Al-Monitor, “In our experience with ... Abadi, all his promises about the Green Zone were empty and just for media show.”

Jahjih, who often criticizes the Iraqi government, believes Abdul Mahdi’s promise is also just talk, designed to win the people's support. The new prime minister “will not be able to open the Green Zone to the public," Jahjih said.

He might be right about the zone staying closed, especially as there has been lots of talk about renewed demonstrations in Baghdad.

The Green Zone has been a safe area for diplomatic missions and key government offices in the country, and it would take a major political push to open it. Few people seem to believe Abdul Mahdi will succeed in his endeavor, at least not during his first two years in office.