Despite political differences, many Iranians are coming together to lash out at US President Donald Trump after he called Iran "a terrorist nation." 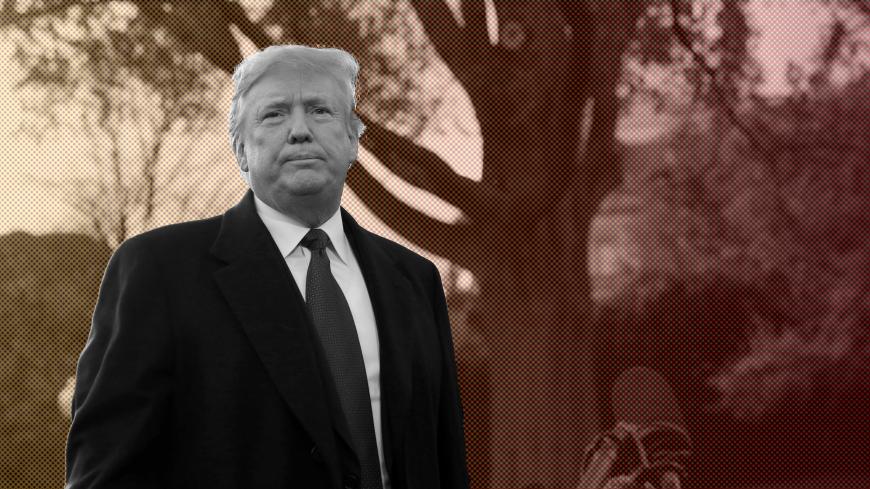 US President Donald Trump speaks to the news media while walking to board Marine One to depart for travel to Mar-a-Lago from the White House in Washington, DC, Nov. 20, 2018. - REUTERS/Leah Millis

"A certain government kills a journalist in a certain country, and while condemning that killing the president of another country brands us terrorists, that's bizarre, isn’t it?" tweeted an Iranian in response to remarks by US President Donald Trump following his Nov. 20 statement on the murder of Saudi journalist Jamal Khashoggi.

"They are a terrorist nation right now," Trump told reporters upon his departure to Florida Nov. 20, only hours after he issued a statement meant to address the CIA findings on the role of Saudi Crown Prince Mohammed bin Salman in the murder of the dissident journalist. Trump started off that statement by lambasting Iran's involvement in the Yemen conflict, only briefly touching upon whether the young prince had ordered the killing: "Maybe he did and maybe he didn't!"

A Nov. 21 article on IRNA — the official news agency reflecting the views of President Hassan Rouhani's government — interpreted the statement as a blatant expression of support for a criminal. "Trump's efforts to help the Saudi government come clean from the Khashoggi affair and … mislead the world public opinion are desperate and only doomed to failure for both the culprit and its supporter," the news agency wrote.

Iran's Foreign Minister Mohammad Javad Zarif was among the first to respond. "Perhaps we’re also responsible for the California fires, because we didn’t help rake the forests — just like the Finns do?" he wrote on Twitter. But Zarif focused on Trump's official statement and not the interview in which he named Iran a terrorist nation. This interview has reignited flames of anger among ordinary Iranians.

"The person accusing us of terrorism has been throwing his full weight behind the world's top terrorist states, namely Saudi Arabia and Israel, [while] we continue to remain victims of terror," wrote an Iranian user on Twitter, supported by another who reposted a picture of Mohammad Taha, a 4-year-old boy killed during a Sept. 22 terror attack on a military parade in the Iranian city of Ahvaz. "Was he a terrorist, too?" read the post under a #ShameOnYou hashtag.

Some considered the domestic political implications of the interview, since President Rouhani has championed negotiations with the West. Trump's latest attack, according to one tweet, was just another signal that "there is no way Iran would sit down at a negotiating table as long this man is in office. … Even bullies bigger than Trump have not succeeded in humiliating or defeating the Iranian nation throughout the entire human history."

Others questioned how Trump was only considering economic interests in his defense of Saudi Arabia. One Iranian noted that the Trump statement only exposed his hatred toward Iranians, which is rooted in his "racist" agenda that has already targeted "America's black community and immigrants."

In a sarcastic reaction, top Reformist figure Mostafa Tajzade said, "Trump's statement in a nutshell was: Viva bin Salman and let's move forward with further sanctions on a 'terrorist nation' which deserves peace, freedom and welfare," referencing US government statements that Washington is seeking to improve the livelihood of ordinary Iranians.

Officials in close touch with everyday affairs of ordinary Iranians, however, refuse to buy those claims. "With its hostile approach and multiple sanctions on food and medicines, the United States is targeting the Iranian people," said the head of the Iranian Red Crescent Society during a speech in the central city of Semnan Nov. 20.

Part of the debate sparked by Trump's latest statement on Iran also rested on whether he was clear about the literal meaning of the word "nation." Last October, he again called Iran a "terrorist nation," leaving many with little doubt now that it was "just a slip of tongue. He was [rather] speaking up his personal beliefs from the bottom of his heart and he targeted Iranians from every walk of life," tweeted one Iranian.

The latest name-calling has revived a sense of patriotism among many Iranians and rallied them behind the flag, a sentiment that the Islamic Republic might need to counter mounting US pressure and alleviate public anger at economic hardships.

"Many of us are critics, opponents or even enemies of the Islamic Republic," wrote an infuriated Iranian. "Trump either doesn’t know what nation means or has underestimated us too much. … This dirty businessman has to hear the sound of our fury."