Pompeo calls on Saudi Arabia to normalize relations with Israel 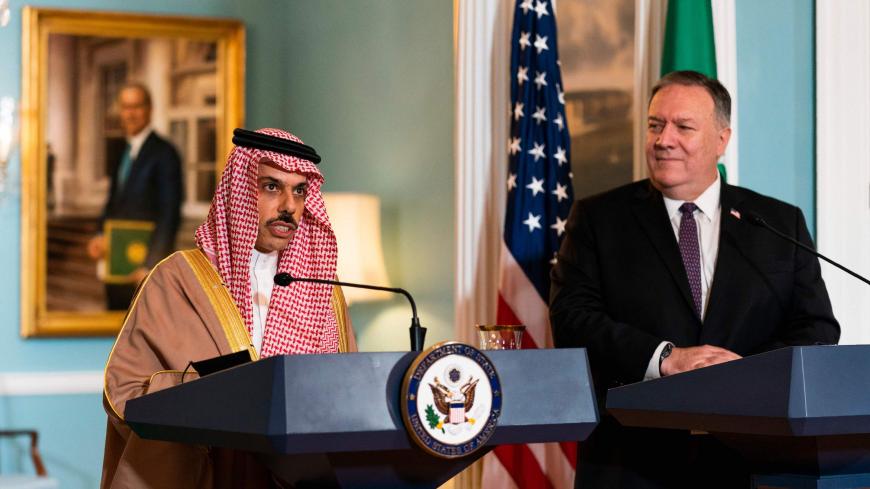 US Secretary of State Mike Pompeo urged Saudi Arabia to consider normalizing ties with Israel, he told the press on Wednesday following a meeting with the Saudi foreign minister as part of the inaugural US-Saudi strategic dialogue in Washington.

“We hope Saudi Arabia will consider normalizing its relationships as well. We want to thank them for the assistance they've had in the success of the Abraham Accords so far,” Pompeo said, adding he was hopeful that Saudi Arabia can encourage the Palestinians to return to negotiations with Israel.

Last month, the United Arab Emirates and Bahrain agreed to recognize the Jewish state in exchange for Israel agreeing to hold off annexing large portions of the West Bank. President Donald Trump has said that he expects "five or six" countries, including Saudi Arabia, to follow their lead and strike their own normalization deals with Israel.

Prince Faisal has previously said that Saudi Arabia still adheres to the Arab Peace Initiative, which calls for recognition to be offered only in exchange for Israel’s complete withdrawal from the Palestinian territories occupied since 1967.

But analysts say the tiny Gulf state of Bahrain would not have agreed to the Israel accord without the approval of its close Saudi ally. Riyadh also hinted at its approval when granting Israeli commercial flights permission to cross its airspace when flying to or from the UAE.

Also on Wednesday, Pompeo said he and his Saudi counterpart “reaffirmed our mutual commitment to countering Iranian malign activity” and added that the Trump administration supports a “robust program of arm sales to Saudi Arabia.”

Despite objections from lawmakers over the mounting civilian death toll in Yemen and the 2018 murder of journalist Jamal Khashoggi, the administration pushed through arms sales worth $8 billion to Saudi Arabia, the United Arab Emirates and Jordan last year.

Pompeo also said he encouraged Saudi Arabia to commit to human rights reforms, “including the need to allow free expression and peaceful activism.”

Despite efforts to polish its image abroad, Saudi Arabia lost its bid on Tuesday to retain a seat on the UN Human Rights Council. The kingdom under its de facto ruler, Crown Prince Mohammed bin Salman, has widened its crackdown on free expression and jailed more than a dozen female activists.

Pompeo also expressed concern for Americans in Saudi Arabia, including Walid Fitaihi, a Harvard-trained physician who Saudi authorities arrested without charge in November 2017. He was released from prison after two years but is now barred from leaving the country.