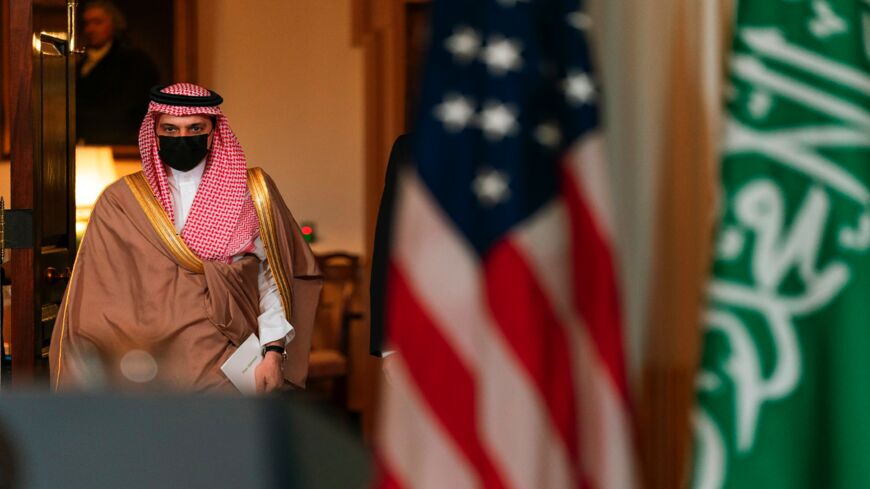 Saudi Minister of Foreign Affairs Prince Faisal bin Farhan Al Saud walks toward the Treaty Room at the State Department, October 14, 2020, in Washington, DC. US Secretary of State Mike Pompeo on Oct. 14, 2020, encouraged Saudi Arabia to recognize Israel, in what would be a massive boost for the Jewish state amid normalization by two other Gulf Arab kingdoms. - MANUEL BALCE CENETA/POOL/AFP via Getty Images

Citing three American and Arab sources, the US news outlet said Prince Mohammed did not reject Sullivan’s normalization proposal outright during their meeting in the Red Sea city of Neom on Sept. 27. The Saudis reportedly presented Sullivan with a list of measures that must be taken first, including improvements in US-Saudi relations.

Since taking office, the Biden administration has pledged to “relicabrate” the US-Saudi relationship, in part due to its human rights record. In February, the United States released a declassified intelligence report implicating Prince Mohammed in the killing of journalist Jamal Khashoggi.

Saudi Arabia has hinted at its approval for the accords and reportedly gave close ally Bahrain the go-ahead for normalization. Last year, Riyadh granted Israeli commercial flights permission to cross its airspace when flying to or from the UAE.

Despite speculation that Saudi Arabia could follow suit, Saudi officials say their country is still committed to the 2002 Arab Peace Initiative. The Saudi-brokered pact calls for Israel’s recognition to be offered only in the event of statehood for the Palestinians and Israel’s complete withdrawal from the territories it has occupied since 1967.

Following the November 2020 US presidential election, The Wall Street Journal reported that the Trump administration came close to striking a deal with Prince Mohammed that would have paved the way for diplomatic ties between Israel and Saudi Arabia. But the kingdom’s de facto leader pulled out, preferring to use the prospect of normalization as a way of building relations with the incoming Biden team.

Last week, Secretary of State Antony Blinken met with his Saudi counterpart, Prince Faisal Bin Farhan, in Washington. Israel wasn’t mentioned in the US public statement following the meeting, though Prince Faisal has previously said that bringing Palestinians and Israelis to the negotiating table should be the priority of peace efforts before "eventual normalization."