Hamas' Change and Reform bloc, looking to drum up support for Palestinians and improve bilateral relations, is taking its cause on the road. 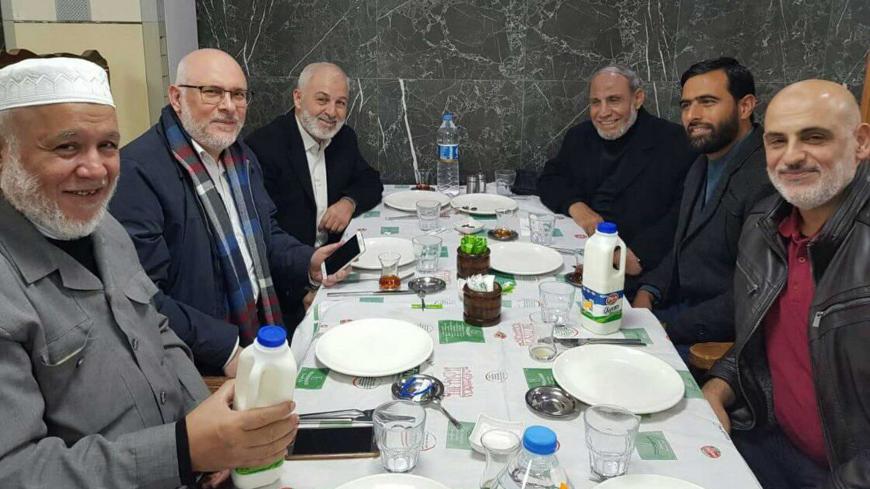 The Hamas delegation from Gaza meets with colleagues in Istanbul, Turkey, in a picture uploaded Nov. 23, 2018. At the back on the right side of the table is Mahmoud Al-Zahar, the leader of the delegation; Hamas' leader abroad, Maher Salah, is in the middle on the left side of the table. - Facebook/afkar.prs

GAZA CITY, Gaza Strip — Hamas has launched a goodwill tour of sorts in the Middle East and Africa, seeking to boost ties and eventually reopen closed doors where the movement is labeled a terrorist group, particularly in the EU.

A delegation of Hamas’ Change and Reform parliamentary bloc left the Gaza Strip on Nov. 21 to visit legislative blocs and political parties in seven countries. The group, led by Mahmoud al-Zahar, arrived Nov. 23 in Istanbul, a source close to the delegation told Al-Monitor. The party discussed organizational matters with movement members there, including Hamas' leader abroad, Maher Salah.

The source, who declined to be named, said the delegation will meet Dec. 1 with parliamentary blocs in South Africa.

The tour is particularly important for Hamas as its rival political party, Fatah, has been trying to dissolve the Hamas-controlled Palestinian Legislative Council (PLC). Hamas won control of the PLC in the 2006 elections, leading to a split in which Hamas military forces took over the Gaza Strip the next year. Palestinian Authority President Mahmoud Abbas, of Fatah, controls the West Bank and the PLO's Palestinian Central Council. Though Hamas has continued to hold PLC sessions regularly in the Gaza Strip, Abbas effectively disabled the body by shutting down its West Bank headquarters in Ramallah.

Yahya Moussa, deputy head of the movement's parliamentary bloc, told Al-Monitor the delegation will travel to five other countries in addition to Turkey and South Africa: Iran, Tunisia, Algeria, Morocco and Lebanon. He added that the movement received official invitations from politicians in all seven countries. He expects the tour to wrap up in mid-January.

The trips aim to open new horizons in the movement’s bilateral relations and mobilize support for the Palestinian cause, he noted. The delegation will discuss the Palestinian people’s hardships in the West Bank, Jerusalem and the besieged Gaza Strip.

The Israeli blockade and near-constant closure of the Rafah border crossing into Egypt prevented any Hamas political delegation from leaving the Gaza Strip for years, which is why these visits are so important to revive ties, Moussa said.

Hamas also was restricted in previous years from using the Rafah crossing for years because of the tense Egypt-Hamas ties following the ouster of Egyptian President Mohammed Morsi in 2013. Also, the Cairo Court for Urgent Matters designated Hamas a terrorist organization for about four months in 2015, before an appeals court negated the ruling. This preceded the major revamp of bilateral ties in mid-2017, and Egypt’s consent for Hamas officials to use the Rafah crossing — on the rare occasions it is open.

Also shackling the movement's political relations: Hamas came out victorious in the 2006 elections, but because it is labeled a terrorist group by the European Union, the United States and others, the PLC hasn't been represented in parliamentary union meetings around the world. Invitations to these meetings are sent to the Palestinian National Council, which is the highest authority for Palestinians in the West Bank, Gaza Strip and the diaspora. The Palestinian National Council dispatches delegations to the events, but excludes Hamas members.

Salah Abdul Ati, a legal expert and Gaza director of the Palestinian Center for Policy Research and Strategic Studies – Masarat, agrees that the Hamas delegation’s tour is important for improving Hamas' ties internationally. He told Al-Monitor he hopes such relations will promote the Palestinian national project and rally support to the Palestinian cause.

Ati said both sides of the PLC must invest in its foreign relations. He called on Abbas and Hamas’ parliamentary bloc to unite, to reactivate the PLC and refrain from issuing unilateral decrees and laws.

Political analyst Sharhabil al-Gharib told Al-Monitor that the visiting delegation could play a significant role in drawing the world's attention back to the Palestinian cause, especially as Israel pursues diplomacy with a number of Arab countries, such as Oman, Jordan and the United Arab Emirates.

This article was updated since its initial publication.