Turkey's ruling Justice and Development Party has agreed to coordinate with its nationalist rival in the upcoming municipal elections as a damning survey showed Turkey's best districts are run by the opposition. 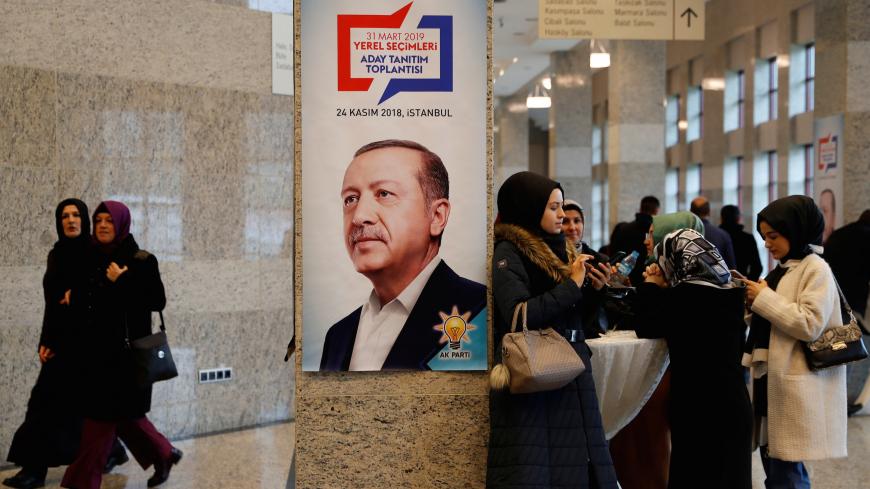 Supporters of Turkish President Recep Tayyip Erdogan are seen at the Halic Congress Center during a meeting of ruling party to announce candidates for the local elections in March 2019, in Istanbul, Turkey Nov. 24, 2018. - REUTERS/Murad Sezer

The move is a bid to consolidate the right-of-center vote ahead of polls in which the AKP could suffer significant losses owing to the failing economy and a falling approval rating for the president.

Over the weekend the leader of the MHP, Devlet Bahceli, said his party would not field candidates in the three biggest cities: Istanbul, Ankara and Izmir. The withdrawal provoked speculation that Erdogan would reciprocate by not fielding AKP candidates in cities where the MHP seeks to win: Adana, Mersin, Manisa, Osmaniye and Isparta.

On Tuesday, Erdogan said such arrangements would be made, but gave no details. “Once you have an agreement, each side will have to make gestures toward the other,” he told reporters.

In his weekly address to AKP legislators in parliament, Erdogan named his choices for AKP mayor of Ankara, Izmir and 18 other cities. But he did not name his candidate for the biggest prize of all: mayor of Istanbul.

Instead, he said his choice for Istanbul would be declared after his return from the G-20 summit in Buenos Aires this weekend.

The man favored to be the AKP candidate for Istanbul is Binali Yildirim, the current speaker of parliament and former prime minister. He met Erdogan after his speech but no statement was issued.

Word here in the capital is that Yildirim does not want the job. Earlier this month he criticized the way his name was being bandied about as the candidate for Istanbul, a city currently in AKP hands.

His record makes him well suited for the position. A nautical engineer, Yildirim served as head of Istanbul Deniz Otobusu (Istanbul Sea Bus), which runs the huge catamarans that carry people from one side of the city to the other across the Bosporus Strait and Marmara Sea. He is credited with vastly expanding the city’s maritime transport sector.

However, Yildirim is a lousy campaigner. His speeches are dry and monotonous and he looks uncomfortable as he delivers them. These faults could cost him dearly if the main opposition, the Republican People’s Party (CHP), chooses Muharrem Ince to be its candidate for Istanbul. Ince is unquestionably the best campaigner in Turkey, drawing crowds as big as two million people in the June elections.

Political insiders say Yildirim has grown tired of changing jobs. In the space of three years, he has been minister of transportation, prime minister (May 2016 to July 2018) and speaker of parliament. It is thought that he was looking forward to finishing his political career in the relatively easy position of speaker rather than having to tackle the cut and thrust of politics in Istanbul, whose 14 million people comprise the most diverse and outspoken electorate in the land.

But to anyone who finds “Istanbullular” (Istanbulites) daunting, Erdogan gave a lesson in how to put them down on Tuesday.

The CHP leader, Kemal Kilicdaroglu, gave him the opportunity by boasting of the results of a survey of the nation’s municipal districts. Compiled by the Human Development Foundation, the survey had evaluated development in almost 500 districts according to UN criteria.

The “Human Development Index by District, 2018” found the top five districts in Turkey to be Besiktas, Kadikoy, Cankaya, Sisli and Nilufer. All of them are run by CHP municipalities and three of them (Besiktas, Kadikoy and Sisli) are in Istanbul. Cankaya is in Ankara and Nilufer is in Bursa.

It was exactly what Kilicdaroglu needed to launch the CHP campaign for the local elections on March 31. “Where the CHP runs a municipality, there is democracy, gender equality and respect for [freedom of] thought,” he crowed.

Erdogan had to reply. A former mayor of Istanbul, he was shocked when the city voted against him in the constitutional referendum last year. On Tuesday he resorted to his trademark tactic of dividing Turks into "them" (the liberal elite) and "us" (the conservative working class).

Referring to the survey’s top five districts, he said, “The people living in those districts would not care if Turkey burns down or prospers. Their electoral profile is detached from the reality of the country. They are the people who eat the cream of Turkey’s pie.”

In fact, many of the residents of Besiktas, Kadikoy and Cankaya are not rich, but middle class. They include blue-collar workers as well as professionals. They tend to be well educated and politically liberal, which is why they vote for the opposition.

Surveys have found the average AKP voter did not finish high school.