Turkish President Recep Tayyip Erdogan appears as the savior of the Turkish economy after revoking the decision to work with McKinsey and thereby preventing American involvement — all at the expense of his son-in-law’s professional reputation. 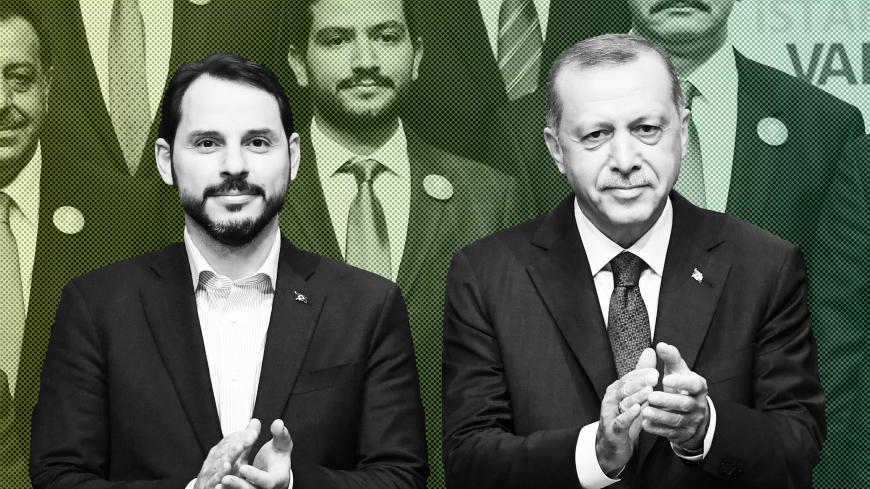 Turkish cartoonist Sefer Selvi published a cartoon on Oct. 13 that managed to explain several intertwined stories in a few words. The cartoon depicted Recep Tayyip Erdogan talking to the press and saying, “After American firm McKinsey, we also expelled American pastor Andrew Brunson [from] Turkey!” Indeed, Erdogan has managed to deliver a popular victory on both Justice and Development Party (AKP)-generated problems.

McKinsey is a “global management consulting firm that serves a broad mix of public, private and social sector institutions,” according to its own description. The firm has been operating in Turkey since 1995.

At the Ninth Turkey Investment Conference — which was organized by the Turkey-US Business Council in New York on Sept. 27 — Treasury and Finance Minister Berat Albayrak announced, “For the Expenditure and Transformation Office within the scope of the NEP [New Economy Program], we decided to work with international management corporation McKinsey. With representatives from 16 ministries, this office will check our goals and results [regarding the economy] every quarter.”

Yet street interviews indicate that most people have never heard of the company and did not even know how to properly pronounce its name.

Albayrak’s statement was widely praised by most sections of the pro-government media, while the majority of the public was trying to understand how an American firm could be trusted to check economic development. Chairman of AKP ally Nationalist Movement Party (MHP) Devlet Bahceli, who is an economist, came out to endorse the decision to work with McKinsey. In a Twitter flood on Oct. 4, Bahceli argued that in order to attract foreign investment, it would not be wrong to work with a global consulting firm.

Along with Albayrak and Bahceli, several pro-government voices vouched for McKinsey. Yeni Safak columnist Ali Saydam referred to the opposition to new policies announced by Albayrak as stupid and raised the idea of an IQ test for those who are opposed to working with McKinsey. Hilal Kaplan, another columnist for Yeni Safak, penned a piece titled “Why McKinsey?” and praised the company as “one of the most trusted consulting firms,” emphasizing that had Albayrak not announced this fact, no one would know. She was confident this decision could have been kept out of the public domain because McKinsey has a strict confidentiality policy.

Indeed, the idea of working with McKinsey might have been more successful if Albayrak had listened to Kaplan’s advice and not spill the beans to the public. Several segments of the public showed strong opposition to the idea of handing over the economy to an American company. The opposition was so fierce that on Oct. 3, Albayrak lashed out at television reports: “This speculative rhetoric [referring to the criticism] is treason if not ignorance.”

Only three days later, Erdogan crushed all support for plans to work with McKinsey, saying, “I just told all my minister friends [that] you will not even seek consultation services from them [McKinsey]. We are [self]-sufficient."

Why did Erdogan speak so bluntly at the expense of Albayrak and several pro-AKP commentators? There were three lines of opposition to working with the New York-based consulting firm.

First, it is the opposition parties and economists. They argued that because Turkey does not want to go to the International Monetary Fund (IMF), it was compelled to work with McKinsey. Main opposition party leader Kemal Kilicdaroglu asked a series of questions — the most compelling being, “Since Erdogan holds the United States as the main reason for the economic crisis, how can an American firm help us recover?”

The personal relationship between McKinsey and AKP elites also raised suspicions. The head of McKinsey’s branch in Turkey, Ali Ustun, is the son-in-law of Besir Atalay, former interior minister and long-time AKP bigwig. Although Albayrak claimed that McKinsey will not have any executive powers — just advisory — most of the public was not convinced.

The second group consists of current and former technocrats. On the first day of Albayrak’s announcement, Al-Monitor spoke with a bureaucrat from the security intelligence establishment who, speaking on condition of anonymity, said, “We will not cooperate. We will not open our records to a foreign entity.” Durmus Yilmaz, the former president of the Central Bank of Turkey and vice chairman of the nationalist Good Party, spoke harshly against working with McKinsey and emphasized this would allow an American company to view all confidential information on the Turkish economy.

Timur Kuran, a professor of economics and political science and Gorter Family professor of Islamic Studies at Duke University, told Al-Monitor, “Indeed, the regime is opening itself to the danger of being blackmailed. If Team Erdogan is blackmailed, Turkish foreign policy could be guided by the president’s need to protect himself and his cronies. In itself, that would be nothing new, though. For the past few years, Erdogan’s own interests have been the fundamental consideration in all Turkish policymaking. Still, it is alarming that Turkey’s vulnerabilities are growing, that more wrongs are being added to existing wrongs.” Kuran also predicted that if Erdogan’s base is not pleased, he will promptly sever ties with McKinsey.

The third group consists of Islamists and is led by Abdurrahman Dilipak, a columnist for Islamist daily Yeni Akit and prominent figure among conservative groups in Turkey. Dilipak did not mince words and bluntly called McKinsey “a global octopus.” Dilipak argued that working with this company would be the end of the AKP. He referred to the situation as a more urgent problem than that of Gulen, adding, “This fiasco must be cleaned up as soon as possible.” Dilipak said, “You cannot do this. If you dare, then the hell with you.”

“You cannot say, 'I did it [and] so be it.' It is not that simple,” he continued. He referred to McKinsey as “the curse of God,” and he was not comforted by Albayrak’s statement that McKinsey will have no executive powers. Dilipak replied, “If they are to have executive powers, what are you good for?” He concurred that the IMF was a much better entity than McKinsey.

All of the opposing groups asked the following questions: What happened to the Court of Accounts, the agency responsible for performance and regulatory (financial and compliance) audits? Why don't the Court of Account's reviews and recommendations suffice? And why not go to the IMF if structural reforms are needed? The government has so far failed to provide any answers.

Although Erdogan announced an abrupt ending to McKinsey, there were still questions about the conditions of the contract with McKinsey and the costs incurred to cancel it. AKP spokesperson Omer Celik stated that, based on Erdogan’s statement, ministries from now on would seek advice from local firms. He added that no payment has been made to McKinsey yet because there was no contract. Celik said he knows of three ministries that sought McKinsey’s advice, but they have not made any payments. Again, Celik’s explanations left unanswered questions, such as why the need for local advisory firms? Why would McKinsey dispense free advice? What kind of information was provided to McKinsey and other firms for them to generate recommendations?

Erdogan’s statement was a major blow to Albayrak’s already shaken public image. Albayrak has had a difficult time in front of cameras expressing himself and convincing the Turkish public and international markets that he is in control of the economy. His colorful, powerful presentations have provided generous material for Turkey’s sarcasm-loving social media. His repetition of the line, “Look, this is very important,” has generated several comments, op-eds and comedy videos. The McKinsey statement from Erdogan tarnished the last bits of Albayrak’s professional credibility. In the meantime, how the relationship with McKinsey ended and which domestic companies are now auditing the Turkish economy are not yet clear. One sentence from Erdogan, however, was sufficient enough to quiet Turkish Islamists.