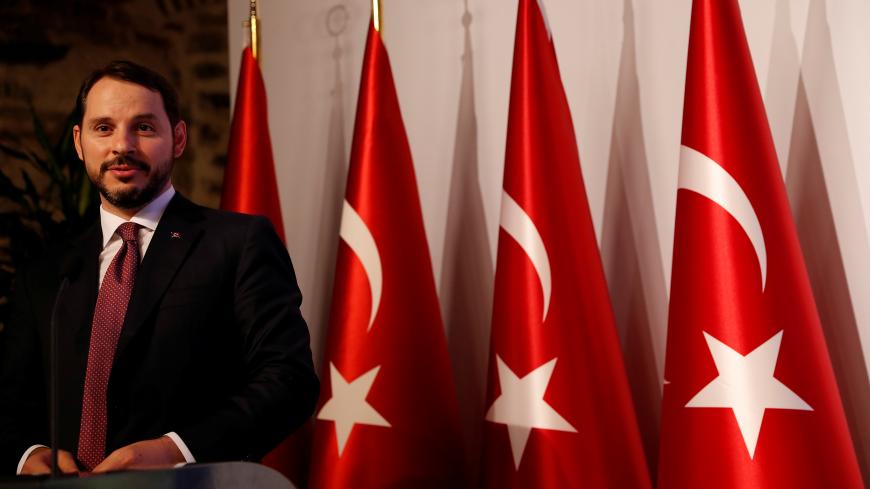 Turkey’s consumer inflation hit its highest level in 15 years, sharpening fears of a recession amid louder grumbles over the government’s mismanagement of the world’s 17th largest economy.

Inflation rose to 24.52% in September from a year earlier, a month-on-month jump of 6.3%, according to data released by the Turkish Statistical Institute today.

The spike was a slap in the face for Turkey’s Economy Minister Berat Albayrak, who is Turkish President Recep Tayyip Erdogan’s son-in-law and some say heir apparent.

Albayrak had asserted year-end consumer price inflation was expected to be 20.8% under the new economic program that was unveiled only two weeks ago. “The son-in-law’s program collapsed in two weeks,” sneered Garo Paylan, a member of parliament for the opposition Peoples’ Democracy Party, in a tweet.

The cost of food and non-alcoholic beverages rose by 27.7% year on year. Prices for transportation rose by a whopping 36.6%.

The opposition daily Cumhuriyet snidely noted that while Erdogan was calling on the public to curb spending, the daily costs incurred by the gigantic palace that he erected for himself in Ankara stood at 1.8 million Turkish liras in 2017 — when the now battered national currency’s lowest rate was around 3.9 liras to the dollar. It’s currently hovering at six liras to the dollar. The story splashed across Cumhuriyet’s front page was based on the Turkish Court of Accounts' audit of government spending in 2017.

Albayrak was quick to join his father-in-law in blaming what they called opportunists, hoarders and speculators for spiraling prices, adding that the government will announce its measures to combat inflation next week. Erdogan went as far as to urge people to snitch on shopkeepers if need be. “In the grocery stores, you are the people who inspect what’s going on first hand. If there are really big price discrepancies … immediately inform the municipal police,” he said.

Albayrak sounded dismissive of the news. “The worst of it's behind us and from October onward, things will grow more normal,” he claimed. But most analysts are not so sanguine. Turkish economist Mahfi Egilmez noted that if anything, the inflation figures proved that “nothing is being done to fight it.”

The gloomy data was announced as controversy continued to rage over Albayrak’s Sept. 28 announcement that Turkey had contracted the services of the US-based management consultants McKinsey & Company to work with the newly established Cost and Transformation office. The body is mandated to oversee Albayrak’s economic program.

The deal with McKinsey is apparently aimed at luring back foreign investors without having to resort to the International Monetary Fund for help. Instead, even pro-government commentators are protesting. Abdurrahman Dilipak, a columnist for the pro-Islamic daily Akit, decried the decision on television, telling the Turkish government, “If they are opening the door to this organization that served as Enron's consultants, no matter how much I love you I will stand against you. … You cannot do this, and if you persist then you can go all the way to hell.”

Others commented on the apparent contradiction between Erdogan’s scapegoating of Western powers for Turkey’s economic woes only to pay a scandal-tainted American company to alleviate them. It’s not his first U-turn. On the same day that Erdogan repeated his habitual tirade against higher interest rates, the Central Bank finally hiked its benchmark interest rate by 625 basis points to 24% on Sept. 13.

Most Western analysts, however, saw the move as too little, too late. Wolfango Piccoli, co-president of London-based consultancy Teneo Intelligence, told Al-Monitor, “The crisis that Turkey currently faces is largely self-inflicted and caused by the political choices and priorities of Erdogan’s regime. There is no consultancy in the world that can fix Turkey’s economic woes unless [these factors] change.” Piccoli added, “Bringing McKinsey on board may also suggest that Albayrak does not believe Turkey’s treasury is up to the job.”

Timothy Ash, an economist at Bluebay Asset Management who closely follows Turkey, took a slightly less bleak view of McKinsey’s role. “On the margin it is positive,” he told Al-Monitor. “It does suggest a willingness to look for cost savings on the fiscal side.” Ash observed, however, “The big issues are not really on the fiscal side. Indeed, even if Turkey was on an IMF program, I don’t think the Fund would be pushing for big fiscal savings.” Rather, Ash continued, “The issues are centered on bringing back confidence and credibility in terms of monetary policy.” There remain “huge question marks around the central bank’s independence and credibility even after the September hike."

The other big issue Ash noted was non-performing loans (NPL) and foreign exchange liquidity in the banking sector. “I think international investors will only roll foreign currency debts of banks if they trust the bank balance sheets. So the focus should be recognizing, quantifying and accepting NPLs, dealing with these and recapitalizing banks. Not sure what role McKinsey is playing there.”