The Turkish government’s hallmark rejection of self-criticism affects consistency and realism in its diagnoses of economic woes and the remedies it plans. 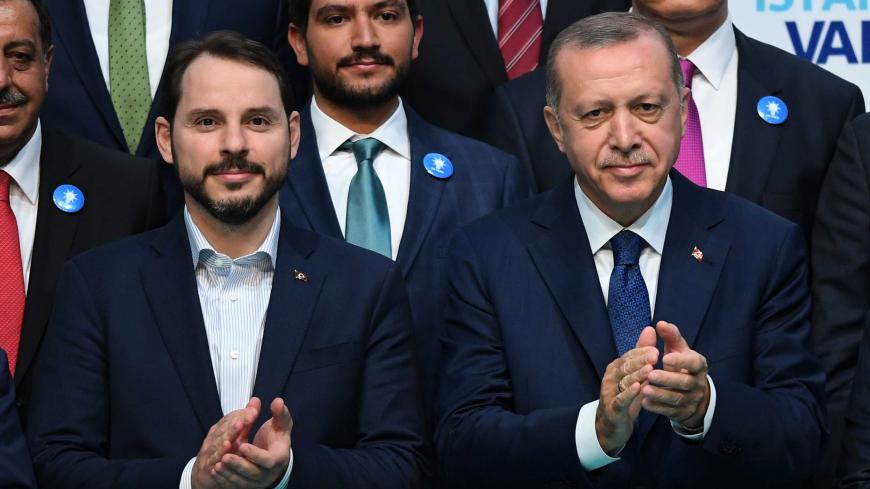 After a long delay, Ankara has finally released its new medium-term economic program, a road map of fundamental economic policies and projections that was supposed to be completed in May. Named the “New Economic Program,” the three-year plan was unveiled Sept. 20 by Treasury and Finance Minister Berat Albayrak, who is also President Recep Tayyip Erdogan’s son-in-law.

The program had been eagerly anticipated in the hope it would outline the prospect of a new “story” of success for Turkey and stimulate much-needed foreign investments. Government officials had claimed the gloom in the Turkish economy — some already call it a crisis — would dissipate once the program was announced. In a TV interview Aug. 3, Albayrak raised expectations, promising “a transformation unlike other medium-term programs in the past.”

How Ankara would diagnose the current bottleneck was of special interest to economic actors, given Erdogan’s harsh objections to defining the downturn as a “crisis.” The program highlights mostly “external factors” to explain the problems. It refers to the mass anti-government protests in the summer of 2013, “the judicial coup” in December 2013 — large-scale corruption probes that implicated government members among others before being thwarted by Ankara — and the 2016 botched coup attempt as having had “negative effects” on the economy, even though “political stability was strengthened and the healthy functioning of democracy was guaranteed” in the four elections held in the meantime.

According to the program, the risks stemming from Syria, the US Federal Reserve’s rate hikes and especially “the US administration’s direct targeting of the Turkish economy and the Turkish lira” curbed capital flows to Turkey and pushed up the country’s risk premium, resulting in sharp increases in interest and foreign exchange rates.

For close observers of the ruling Justice and Development Party (AKP), such diagnoses are hardly a surprise. Lack of self-criticism is perhaps the party’s most distinct characteristic; hence resignations based on admission of failure or shortcomings are never seen among AKP ministers or senior bureaucrats. Everything negative is linked to “external” sources or described as an attack, and the AKP is only a victim.

The same way of thinking sways Ankara’s diagnoses of its economic woes, which, in turn, affects consistency and realism in the remedies and targets it outlines for the coming years. Among the projections in the program, the only one that stands out as realistic is inflation reaching nearly 21% by the end of 2018. In the next three years, inflation is projected to decrease sharply. For economic growth, the projection stands at 3.8% this year and 2.3% in 2019 before rising to 3.5% in 2020 and 5% in 2021.

The program’s assumption is that the average price of the dollar will be 4.9 Turkish liras this year, without any indication how this could be achieved. The greenback was trading for more than 6 liras in the hours the program was unveiled. The dollar’s average exchange rate is projected at 5.6 liras next year and 6 liras in 2020.

Analyzing how consistent the key targets are, prominent Turkish economist Mahfi Egilmez writes, “The growth rate reaching 2.3% in 2019 — while the current account deficit and the budget deficit continue to decrease — does not seem consistent. The dollar’s exchange rate falls from 6.2 Turkish liras in the beginning of 2019 to 5.16 Turkish liras at the year-end. In other words, the Turkish lira significantly appreciates in 2019, according to this projection. In this case, the $12 billion increase in exports is not coherent.”

Faik Oztrak, the spokesman of the main opposition Republican People’s Party and former treasury undersecretary, said, “They have squeezed the nation between [high] interest and exchange rates. We see that only the name of the program has changed. … Looking at the measures and tables, one can see that the program is no different from previous ones. In short, the mountain has brought forth a mouse.”

Moreover, Albayrak’s targets were at odds with the projections that the Organization for Economic Co-operation and Development (OECD) released the same day. The OECD cut down its growth forecast for Turkey from 5.1% to 3.2% in 2018 and from 4.9% to 0.5% in 2019. Of note, the OECD report seemed to associate Turkey and crisis-hit Argentina, which is already under the watch of the International Monetary Fund (IMF).

How the IMF will react to Turkey’s new program remains to be seen. The day the program was unveiled, an IMF official only said that the fund had taken note of the announcements and would be assessing them in detail. “We are in the process of updating our Turkey forecast and these will be released at the time of our World Economy Outlook publication in a few weeks' time during the Annual Meetings,” he added. A significant gap between the IMF’s projections and those of Ankara would not be a surprise.

Erol Bilecik, the head of Turkey’s largest business group, TUSIAD, lent support to the program, welcoming “especially the serious saving measures, the continuation of fiscal discipline, the struggle against the unregistered economy, tax policies, the support for value-added production and the resolve to reduce the current account deficit.”

Yet, did the money markets buy “the story” the program offers? This is perhaps the most pertinent question, given Turkey’s significant need for external financing and thus the need to appeal to foreign investors and lenders. The dollar was trading for about 6.2 liras on the morning of Sept. 20, and Ankara hoped the lira would rally after the rollout of the program. Yet, the “story” did not seem to sell well. The dollar’s daily closing rate did not fall below 6.2 liras that week, and despite some gains by the lira in the ensuing days, no significant change has occurred.

Moreover, Turkey’s risk premium remains the highest among emerging economies, and higher even than that of debt-ridden Greece.

The results so far indicate that economic players were little impressed by the new program. All eyes are now on the upcoming IMF forecasts, which will be important especially for foreign investors, drawing a more realistic but probably gloomier prospect for the Turkish economy.