As mystery remains over the fate of a missing dissident Saudi journalist, Ankara finds itself in a position in which it may try to rescue a foreign journalist at a time when more than 100 journalists are behind bars in Turkey. 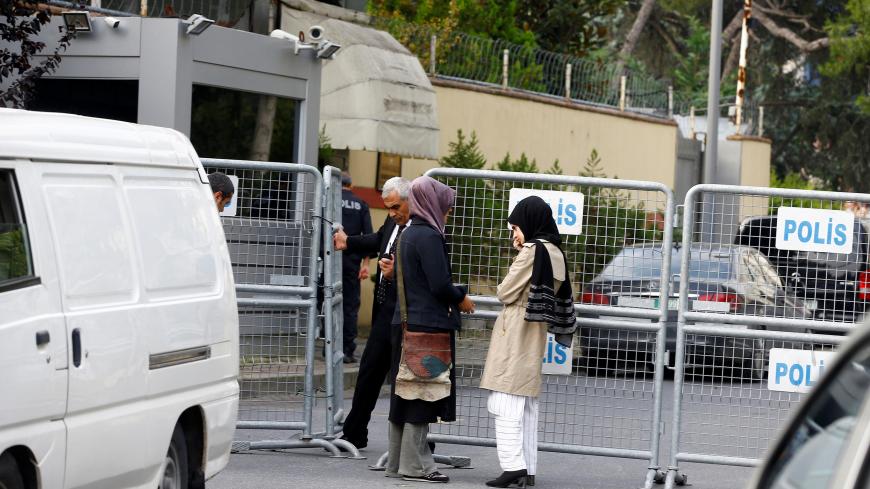 The fiancee of Saudi journalist Jamal Khashoggi and her friend wait outside the Saudi Arabian Consulate in Istanbul, Turkey, Oct. 3, 2018. - REUTERS/Osman Orsal

The fate of a missing dissident Saudi journalist has remained shrouded in mystery, particularly following Ankara and Riyadh’s contradictory statements Oct. 3 about his whereabouts.

Jamal Khashoggi, 59, a frequent contributor to The Washington Post and author of several articles critical of Saudi Crown Prince Mohammed bin Salman, went missing Oct. 2 after visiting the Saudi Arabian Consulate in Istanbul. The journalist’s fiance and friends believe Khashoggi has been held at the consulate since he entered it.

“We are certain that Jamal is being held inside,” the head of the Turkish-Arab Media Association, Turan Kislakci, told AFP.

His fiance said Khashoggi visited the consulate to obtain some documents in order to be married next week. "He went in, and as far as I know, he didn't come out. And if he did exit, we have no news of him," his fiancee, who declined to be identified, was quoted as saying by The Associated Press.

However, Saudi authorities denied the allegations Oct. 3 in a statement sent to The Associated Press. “Mr. Khashoggi visited the consulate to request paperwork related to his marital status and exited shortly thereafter," the statement said. "The government of Saudi Arabia follows up diligently on any reports related to the safety of any of its citizens and will continue to follow up on these reports.”

Shortly after, a contradictory statement came from Turkish President Recep Tayyip Erdogan's spokesman. Speaking to reporters at the presidential complex in Ankara, Ibrahim Kalin said Turkish authorities believed the journalist was still at the consulate.

"According to the information we have, this person who is a Saudi citizen is still at the Saudi Consulate in Istanbul," Kalin said.

Khashoggi had gone into self-imposed exile in the United States last year. The journalist later penned several critical articles targeting the Saudi crown prince and lamented the Saudi-led war in Yemen as “cruel” and “devastating.”

The Post also expressed concern about Khashoggi, one of its contributing writers. “We have been unable to reach Jamal today and are very concerned about where he may be. ... It would be unfair and outrageous if he has been detained for his work as a journalist,” The Post’s international opinions editor, Eli Lopez, said in a statement.

The incident places Turkey in an awkward position as the journalist may technically be on Saudi soil; the situation poses an intricate diplomatic problem for Turkey.

Ironically, Ankara may now find itself in a position in which it would try to rescue a foreign dissident at a time when more than 100 journalists are behind bars in Turkey.

Nevertheless, Kalin struck a cautious tone to avert a possible diplomatic crisis between the two countries. “We hope the problem will be solved smoothly,” he said.