Investigators are making headway in the death of a journalist with Saudi, Turkish and US ties. 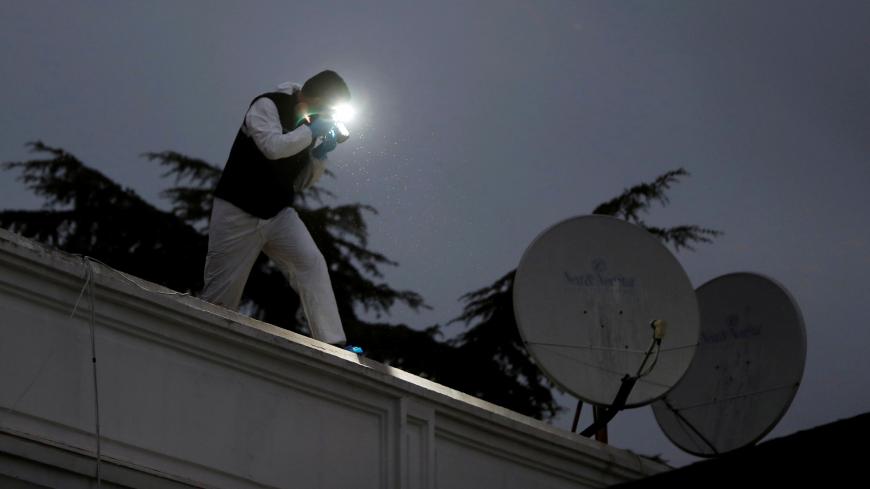 As speculation continues to swirl around the mysterious case of Washington Post columnist Jamal Khashoggi, Turkish homicide investigators are pursuing leads and believe they are getting a better handle on the events that took place Oct. 2 in Istanbul. Forensic specialists are searching for Khashoggi's body in possible burial sites in Istanbul and its vicinity.

Monday, investigators located a Saudi Consulate vehicle at an underground car park in Istanbul and were seeking permission from the consulate to search the car, Turkey’s state-run Anadolu Agency news outlet reported.

Khashoggi, a Saudi citizen and permanent resident of the United States, was last seen entering the Saudi Consulate in Istanbul around 1 p.m. local time, according to camera recordings. An outspoken critic of the Saudi government, Khashoggi is presumed by many experts and observers to have been tortured, assassinated and dismembered on the orders of Saudi Crown Prince Mohammed bin Salman.

Saudi Arabia initially denied knowing anything about Khashoggi's disappearance, but on Oct. 19 said Khashoggi had been killed at the consulate during a fistfight.

Turkish officials believe that there's much more to the story and that it's only a matter of time before the truth is known.

“There is no perfect murder,” said a security person in Istanbul speaking to Al-Monitor on condition of anonymity. That person is but one of many diverse, credible sources Al-Monitor spoke with about the Khashoggi case.

The conviction is growing in Turkey that the execution was planned directly by Riyadh, as more information is gathered from the locations where an alleged hit squad operated, and from their telephone calls.

On Oct. 21, for the first time, Turkish President Recep Tayyip Erdogan commented about Khashoggi's death, stressing that Ankara is looking for justice and is determined to uncover all facts. Erdogan said that on Oct. 23, he will reveal some significant findings about the case. Many in Ankara say Erdogan will shoot down Riyadh’s narratives on the death and will damage the reputation of the crown prince Muhammad bin Salman. According to recent leaks to the Turkish media, there are some telephone recordings proving the crown prince was personally involved in the death.

If Riyadh did plan an execution, what made the government confident enough to carry out such an operation in another country? Wouldn’t it have preferred a low-profile option? This tells us that Riyadh’s first choice would have been to have Khashoggi returned to Saudi Arabia alive — or dead, if he proved too troublesome. It's obvious Riyadh didn't calculate the affair would become an international issue in such a short time.

Authorities know a 15-man team flew Oct. 2 from Riyadh to Istanbul Ataturk Airport on two Gulfstream IV private jets and checked into a hotel. They went to the consulate at 12:30 p.m., about a half hour before Khashoggi entered. Officials believe the team was divided into three groups: interrogators, executioners and "fixers" charged with cleaning up the scene and trying to remove any evidence of a crime.

Detailed investigations conducted Oct. 17-18 at the consulate complex, inside and out, and its sewage system, are likely to provide the answer.

Because Khashoggi hadn't come back out from the consulate, fears about his fate were first reported by Turkish media around 6 p.m., followed by international news after 8 p.m. Yet officials now know that between 5 p.m. and 9 p.m., the Saudi team quickly split up and headed to Riyadh on private jets or scheduled flights. How were they able to leave Istanbul despite the media reports?

There was confusion between police and intelligence units about whether Khashoggi was considered "missing" or "kidnapped/detained" under Turkish laws. This confusion, the government's delay in setting up a special investigation team and the lack of coordination among intelligence units gave the team 3½ hours to leave the country. Experts told Al-Monitor that if even one member of the squad had been apprehended and questioned, the investigation would have been much different. Istanbul police are convinced the men didn't take Khashoggi’s body with them.

So where are his remains? Experts cite two possibilities: Either the body parts were dissolved with chemicals and disposed of in the sewer system, or they were buried in different parts of Istanbul. Bearing in mind the short time the supposed hit squad had, experts think it is likely that at least his bones were buried in different locations of Istanbul. This is why officials have been checking hundreds of closed-circuit TV cameras to determine the routes of all consulate vehicles on Oct. 2.

Many people took notice that Saudi Consul General Mohammed al-Otaibi hastily departed for his country on the first available flight after he heard his residence was to be searched. Security sources told Al-Monitor that if the consul had not left so quickly, he might have been summoned for questioning as, at the moment, he is the most important potential witness. Officials fear he may not live long enough to answer questions, if he is still alive.

Turkish media are reporting there is an audio recording of Khashoggi's alleged murder in which the consul general's voice is heard, followed by someone telling him to shut up if he wanted to return to Saudi Arabia alive.

Ankara's worries about the diplomat's safety may be justified, because on Oct. 18, media reports surfaced saying a member of the alleged hit team, air force Lt. Meshal Saad al- Bostani, had died in a mysterious traffic accident in Saudi Arabia. Now questions are being asked about the fates of other members of the team and the consul general.

Istanbul investigators may well discover evidence to back up, at least in this case, the axiom that there is no perfect murder. But do flawless murders perhaps exist in the diplomatic arena? How much will be disclosed to the public? This will be determined by ongoing bargaining among Ankara, Riyadh and Washington. In the meantime, Khashoggi's disappearance will have myriad ramifications and is a direct blow to the dignity of the Turkish state and a violation of its sovereignty.