Why Iraqi Turkmens are excluded from the new government

Iraqi Turkmens say they have been excluded from the new Iraqi government because they refuse to follow a sectarian approach to politics. 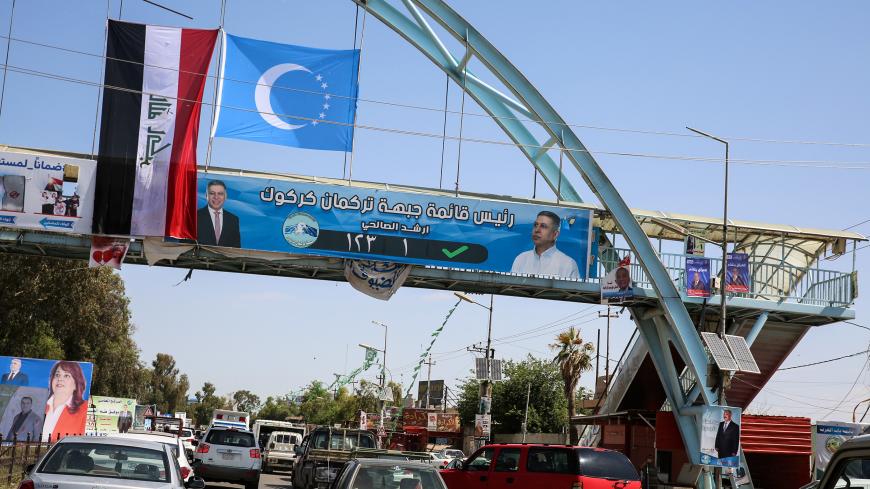 Iraqi Turkmens had hoped that political circumstances would turn in their favor after oil-rich Kirkuk passed from Kurdish rule to the control of the federal government. Yet the Turkmens were disappointed when Iraq's newly appointed prime minister, Adel Abdul Mahdi, excluded Turkmens from his Cabinet.

Ali Mehdi, the spokesman for the powerful Iraqi Turkmen Front, said the Iraqi government blatantly ignores Turkmens. He demanded that one of the eight unfilled Cabinet seats be given to a Turkmen.

The ostensible excuse for the exclusion of Turkmens is that Turkmens are politically divided and that the government, which aims to set up a technocratic system, is ignoring nationalistic demands that could aggravate division. But Turkmen representatives speaking to Al-Monitor said other groups are also divided, and that the new Cabinet features political celebrities.

Nine Turkmens elected as deputies in the May 12 elections have set up a Turkmen Group in the parliament to work together.

The names of potential candidates for the vice presidency, ministerial and under-secretarial posts were leaked to the Iraqi media. Yet all the Turkmen names cited in the reports were from Kirkuk, causing anger among Turkmen communities in other regions.

The growing sectarian split among the Turkmens was also felt in their political choices. The Turkmen sphere of influence is naturally divided between Turkey and Iran. The Iraqi Turkmen Front, which rejects Shiite-Sunni division, still insists on being a major party attached to a national and secular identity.

Turkmens who fought against the Islamic State in the ranks of the Popular Mobilization Units after the fall of Mosul in 2014 inevitably entered into relations with the political wings of Shiite militias. That is why Kirkuk-based Turkmens found themselves slots in Shiite bloc lists.

The question is, why did the Turkmens who built such strong ties with Shiite blocs not really make political gains?

Ershad Salihi, the chairman of Iraqi Turkmen Front and a deputy from Kirkuk, said Sairoon Alliance leaders who cooperate with the Victory Alliance and the Reform Front in parliament are not keeping their word. Speaking to Al-Monitor, Salihi said Turkmens are excluded from politics because they advocate and defend a national line instead of sectarian ideology.

“According to our political accords, we were to be allotted two seats: one as vice president and the other as a minister," he said. "But now there is no Turkmen minister. If a Turkmen is to be appointed as the vice president, the word is out that they will prefer a Shiite Turkmen, and not me, as the leader of the Iraqi Turkmen Front. If they allot that seat to Turkmens, it will be to a person who advocates a sectarian approach.”

He continued: “We are paying this price because we don’t believe in sectarian projects. If we had subscribed to sectarian projects, Sunni Turkmens could [have the same political clout as the] Sunni Arabs and Shiite Turkmens with Shiite Arabs. The coalition had promised they will give us whatever we wanted, but we joined the Islah [Reform] movement because they did not consider us a national project.”

According to Salihi, the British recommendation in the 1920s to keep the Turkmens, seen as remnants of the Ottomans, away from state mechanisms is still valid today. “Turkmens who have adhered to a national ideology for about 100 years could not find a place in state decision-making mechanisms," he said. "Even in Saddam Hussein’s reign the Kurds had a minister and vice president, but not the Turkmens. Iraqi Turkmens will be given critical posts as long as they adhere to a national project. The old recommendation still applies.”

Asked if Turkey is using its influence in Iraq, Salihi said, “Foreign Minister Mevlut Cavusoglu spoke several times about how Turkmens should have a say in the decision-making mechanisms. They promise, but this is not what they do.”

He added, “If this situation continues, new generations may not feel loyal to Iraq’s territorial integrity and may opt for a new strategy. If not, Iraqi Turkmens will be eradicated from this region.”

Salihi said that the Turkmens had decided to act together on issues that concerned them. He dismissed the pretext that Turkmens were being kept away from the Cabinet because a technocratic government was being set up. He said it was nothing but a rekindling of the 1920 British recommendation.

Turkmen sources summarized the reasons behind their exclusion from the new government:

There is the widespread opinion that the Iraqi Turkmen Front serves as a channel for Turkey’s intervention in Iraq. Denying Turkmens a ministerial post also means excluding Turkey. Yet Turkmens claim they are forced to behave along sectarian lines or else be excluded.