How can Turkey survive US sanctions on Iran?

At the United Nations, Turkey repeated its intention to ignore US sanctions. How the Erdogan administration will calculate costs and benefits of subverting the US sanctions remains a mystery. 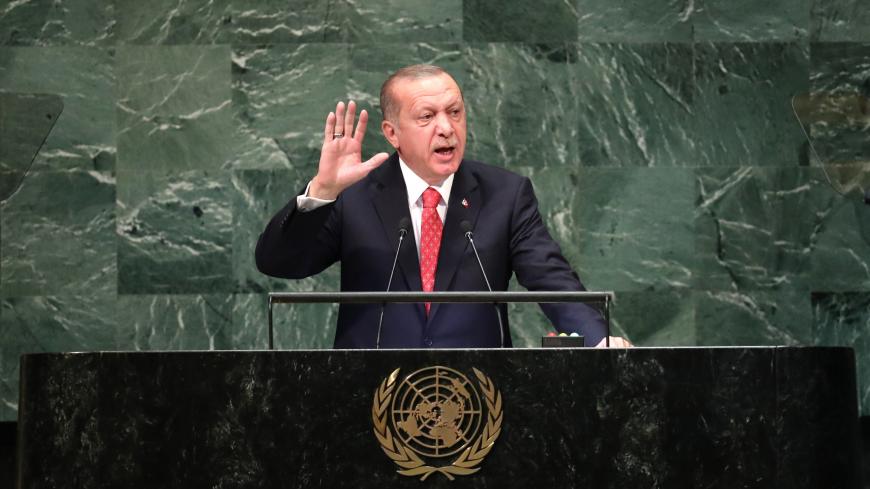 Turkish President Recep Tayyip Erdogan is a leader known for his frequent flip-flops on foreign policy matters. Yet since the White House issued an executive order to reimpose certain sanctions on Iran, Erdogan has been persistent in his decision not to fall in line. At the 73rd session of the United Nations General Assembly in New York, Turkish Foreign Minister Mevlut Cavusoglu announced one more time that Turkey would not support US sanctions on Iran.

The proposed US sanctions have two rounds. The second round, which will force the SWIFT financial messaging system to disconnect Iranian banks from the world, is to go into effect early November. The second round is also targeting Iran's energy and financial sectors, casting a wide net over the Iranian Central Bank and state banks, oil exports, ports and the shipbuilding industry. It returns Iranian entities and businessmen to the US government’s blacklist — meaning any third-country bank, individual or company that deals with them would risk hefty fines and significant sanctions that could cut them off from US dollar-dominated global markets.

The Turkish case here presents an interesting outlook. First, as Al-Monitor columnist Fehim Tastekin highlighted, neither the Turkish-Iranian trade volume nor investments benefited from the lifting of sanctions in 2015. To the contrary, Turkish energy-related imports peaked between 2011-2012, along with hundreds of millions of dollars worth of gold exports (sustained through Obama era waivers) in the same years. Turkish-Iranian energy-related trade volume was higher under sanctions.

Second, Turkish banks and Iranian-Turkish businessmen Reza Zarrab have carried out one of the biggest sanctions evasion schemes in recent US history.

These two factors coupled with Erdogan’s recalcitrant statements against US sanctions generate rhetoric that could easily lead to the further economic isolation of Turkey. Erdogan has referred to Iran as a “strategic ally just like the United States” and “neighbor” and asked the question “who will heat our homes in the winter?” Indeed, Iran's share in Turkey's natural gas imports is 17% and Russia's share is 52%. Of equal importance, about 40 to 50% of electricity produced in Turkey is also through natural gas. Iran's share in Turkey's oil imports is also significant with 27%. On the 2017 Iranian export list, Turkey ranks as the fifth-largest trading partner. Regardless of Erdogan’s views on the sanctions, the proposed sanctions on Iranian oil and the worsening Venezuelan oil supply deficit is expected to lead to a sharp increase in global oil prices — all to the detriment of the precarious, energy-dependent Turkish economy.

Aykan Erdemir, a senior fellow at the Foundation for Defense of Democracies in Washington (the foundation gave an award to an FBI special agent who was investigating the Zarrab scheme), told Al-Monitor, “If Erdogan takes a U-turn from his pledge to defy Iran sanctions and negotiates a waiver with Washington, Tehran would be forced to use its oil revenues from Turkey to import goods allowed under humanitarian trade exemptions. This will be a win-win solution for Turkish and Iranian people, boosting Turkish food and medicine exports while also providing the Iranian market with affordable consumer goods.”

“If Ankara and Tehran again collude to evade US sanctions via illicit methods, this will again enrich corrupt Turkish and Iranian politicians who take a hefty cut from illicit trade at the expense of their citizens,” Erdemir concluded.

Tugce Varol, a scientific adviser for the 21st Century Turkey Institute, argues that sanctions to be imposed in November will have a much deeper impact on the Turkish economy and energy sector now than those imposed almost a decade ago. “In terms of Turkey's geographical location, the country is capable of importing crude oil through tankers from various resource countries, as happened for a long time from Iran. However, Turkey has been importing almost 9 billion cubic meters of gas annually via direct pipeline from Iran. During the previous sanctions, the US administration approved Turkey's request to continue importing natural gas from Iran because the country's economy would have been hit harshly regarding the unavailability of replacing Iranian gas with any other resource. As happened before, TUPRAS — a private establishment that owns four of Turkey's refineries — has already reduced importing Iranian oil by replacing it with Russian and Saudi oil,” Varol told Al-Monitor.

However, Varol also stressed that developments may unfold in favor of Turkey in certain aspects. “Regarding the natural gas trade between Turkey and Iran, this time Turkey cannot receive an exceptional status more than one year because both Turkish Stream and TANAP natural gas pipelines are projected to be completed at the end of 2019, which would easily replace Iranian gas. Moreover, there might be another development in favor of Turkey about transportation of Iraqi oil,” Varol said.

“Turkey has been carrying Iraqi oil combined with the Kurdish oil for years via the Kirkuk-Ceyhan oil pipeline, but the trio of Iraq-Iran-Erbil agreed on carrying Kirkuk oil to world markets through Iranian pipelines a while ago and started the trade already. Last week, Iraqi SOMO (the State Organization for Marketing Oil) announced that it temporarily cut Kirkuk oil exports to Iran because of a problem with customs regulations. I believe that as a result of the sanctions against Iran, Iraq will have to cut its oil and gas relations with Iran and it will force Baghdad to reconsider increasing sending its oil via Turkey.”

Seasoned journalist Musa Ozugurlu agrees with Varol that sanctions this time around will hit Turkey harder. Ozugurlu emphasized that a decade ago Turkey had alternatives to Iran; today, however, both countries have become targets of US sanctions.

One factor that will affect the decision can be found in Varol’s explanation on forming an anti-US bloc with other countries. “EU foreign policy chief Federica Mogherini and foreign ministers of France, Germany and the United Kingdom stated that they will continue doing legitimate business with Iran and maintain effective financial channels with Iran as well as the continuation of oil and gas trade. Afterward, China and Russia agreed with the biggest three countries of the EU to engage in a special payments system that aims to facilitate trade with Iran and erode US sanctions,” she said.

How this proposed system will work has not yet been determined. Even if these countries are able to generate a new financial institution to protect companies dealing with Iran, its scope will be rather limited. Alternative currencies proposed to replace the dollar payment system in the energy sector are not seen as credible. US sanctions target not just the direct buyers of Iranian oil or natural gas and import financiers, but also any companies that deal with them will also be affected by the secondary sanctions. This could be crippling for the struggling Turkish economy.

Whether Turkey will again try to evade sanctions and if that is possible under the careful watch of the agencies will also depend on Turkish bankers’ know-how. A senior banker who spoke on the condition of strict anonymity said, “In order to design an evasion scheme even more elaborate than the Zarrab case, specific international banking expertise is essential. The Hakan Atilla case sent chills down the spines of all reputable bankers in Turkey. Now with the new sanctions, if Turkey contradicts fundamental American policies it will be impossible for bankers to travel to the United States in any capacity. I believe this time around that even if there is another Zarrab it would be rather difficult to convince any sober bankers to put their names down on a shady document. Despite the harsh rhetoric, Turkey has to fold and comply with sanctions after November.”

Whether Turkey complies or not, the sanctions will cost Turkey simply because it has failed to foresee and prepare for its potential consequences. Turkish economists and security bureaucrats have a tall order to explain clearly to Erdogan the scope of fines and penalties if Turkey attempts to evade sanctions and is caught again.

by Murielle KASPRZAK and Joseph SCHMID | AFP | May 26, 2022
END_OF_DOCUMENT_TOKEN_TO_BE_REPLACED