President Donald Trump and Benjamin Netanyahu’s government are using this week’s massacre at the Tree of Life synagogue to cement support for each other. 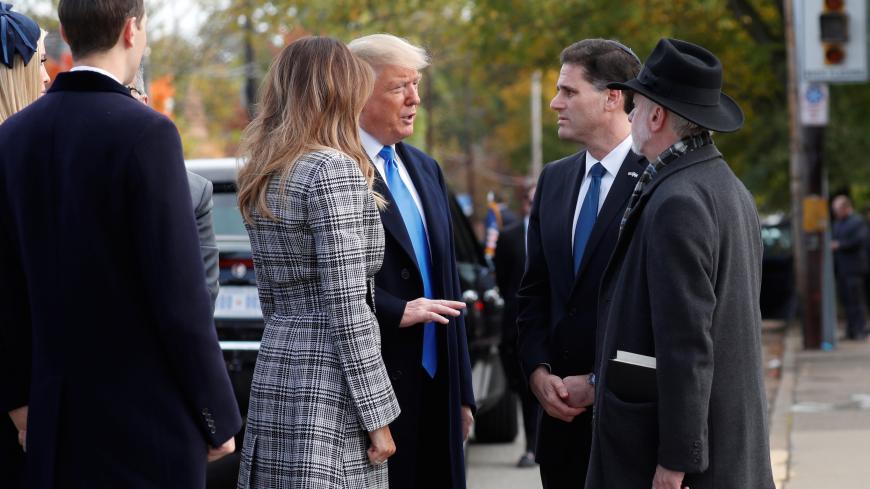 US President Donald Trump talks with Israeli Ambassador to the US Ron Dermer and Tree of Life synagogue Rabbi Jeffrey Myers as he arrives with (L-R) his daughter Ivanka Trump, son-in-law Jared Kushner and first lady Melania Trump outside the synagogue where a gunman killed 11 people and wounded six during a mass shooting Saturday in Pittsburgh, Pennsylvania, US, Oct. 30, 2018. - REUTERS/Kevin Lamarque

In the aftermath of the deadliest attack on the Jewish community in American history, Israel’s right-wing government went into overdrive to defend President Donald Trump from charges that his rhetoric helped fuel the massacre.

Trump visited Pittsburgh’s Tree of Life synagogue on Tuesday to pay his respects to the 11 dead worshippers, despite requests from Democratic Mayor Bill Peduto and at least one victim’s family that he not attend. Republican and Democratic leaders turned down Trump’s invitation to join and instead the president was greeted by protesters.

And the first person to greet Trump at the synagogue was not a grieving Pittsburgher. Instead it was Israeli Ambassador to the US Ron Dermer.

In the days since Saturday’s massacre, Dermer and Naftali Bennett, Israel’s minister for diaspora affairs, have gone into overdrive to defend Trump, despite his violent rhetoric and significant support among anti-Semites. The Tree of Life shooting was at least the third instance of violence by white supremacists in a week, including the mailing of pipe bombs to Democrats and the media by an avowed Trump supporter.

“I think blaming President Trump for this horrific massacre is unfair; it’s flatly wrong," said Bennett, brandishing the president’s pro-Israel credentials in an interview today on Fox News. “The president moved the embassy to Jerusalem. The president is fighting Israel’s biggest enemy, which is a terrible regime in Iran. And so, the president is no anti-Semite.”

Ironically, Israel’s own chief rabbi, David Lau, created a stir when he refused to call progressive, non-Orthodox Tree of Life a synagogue, instead calling it a “place with a profound Jewish flavor.” The remarks triggered an implicit rebuke from Prime Minister Benjamin Netanyahu, who tweeted Monday afternoon that “the location was chosen because it is a synagogue. We must never forget that. We are one.”

Bennett went on to point to instances of anti-Semitism on both the left and right, highlighting recent comments from Nation of Islam leader Louis Farrakhan comparing Jews to termites. Meanwhile, Israel’s New York Consul General Dani Dayan pointed to a six-year-old tweet from Ilhan Omar, a Minnesota Democrat running for Congress, saying that Israel is “hypnotizing the world.”

But Israel’s full-throttled defense of Trump has angered many American Jews, a constituency that overwhelmingly votes Democratic.

“It’s extremely disturbing how they appear to be totally ignoring the views and concerns of a large majority of American Jews who oppose President Trump and are concerned by his ideology,” said Logan Bayroff, the communications director for the liberal group J Street, which lobbies on Israel issues. “Instead they’re working overtime to provide cover for the president and for his Republican allies.”

In a departure from his equivocation over white supremacist attacks in Virginia last year, Trump clearly condemned the “evil, anti-Semitic attack.” But many Jews are quick to point to point to Republicans’ role in propagating the very conspiracy theories that motivated the shooter.

In an email to supporters on Monday, J Street noted that Trump and other Republicans have dabbled in similar anti-Semitic conspiracy theories ahead of the midterm elections by erroneously suggesting that Jewish billionaire George Soros is funding a caravan of migrants from Central America, who are seeking asylum in the United States. Anti-Semites often invoke Soros and “globalists” as a dog whistle against Jews — conspiracies parroted online by synagogue shooter Robert Bowers.

“It’s clear that this kind of anti-immigrant, anti-Semitic thought has been spread not only by far-right groups, but by President Trump and some of his allies in the Republican party,” J Street wrote in the email. “In the lead-up to next week’s pivotal midterm elections, we have seen a transparent effort by Trump and some Republican candidates to turn bigotry and fear into a political weapon.”

Reps. Steve King, R-Iowa, and Matt Gaetz, R-Fla., have both falsely accused Soros of funding the caravan. And House Majority Leader Kevin McCarthy, R-Calif., tweeted — and then deleted — that Soros and other billionaires of Jewish descent are seeking to “buy” the election for Democrats.

“The Netanyahu government and the right wing in Israel have embraced similar ideology and tactics which we’ve seen from President Trump in describing their opponents as traitors, attacking political dissent and the media and fear mongering about immigrants and refugees and minorities,” Bayroff told Al-Monitor. “There’s a clear common thread there between the Netanyahu government and the Trump administration and that’s part of why the two are in such close coordination on this. They are providing cover for each other.”