Seeking to reduce its huge dependence on Israel, Palestine is set to establish waste-to-energy and solar power projects. 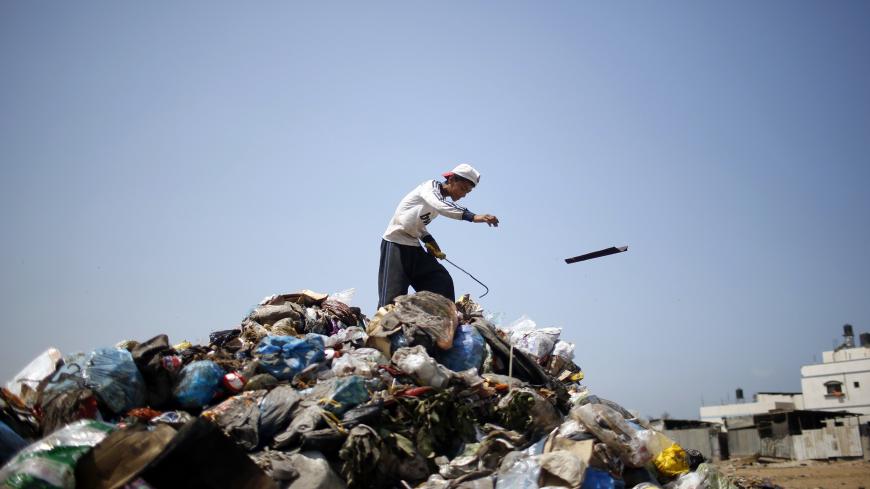 GAZA CITY, Gaza Strip — Palestine is looking to put landfills to good use and develop sustainable energy sources to become more self-sufficient and help limit its reliance on Israel. It plans to increase its locally produced energy and diversify its sources by making use of all types of renewable energy.

According to a general renewable energy strategy developed by the Palestinian Energy Authority (PEA) in 2012, renewable energy should account for 10% of the total electricity produced by 2020, while energy imported from Israel should not exceed 50%. Of the energy currently supplied to Palestine, 97% comes from the Israeli Electricity Corp., leaving Palestine vulnerable to political and economic developments.

Samples from the Zahrat Al Finjan landfill are being collected and examined to determine the amount of energy that can be produced from the landfill. This comes after the PEA, the Palestine Investment Fund (PIF) and the Zahrat Al Finjan landfill services council in Jenin signed a memorandum of understanding Oct. 3 to conduct an economic and environmental feasibility study for a project aimed at generating electricity from the gas produced from decomposing biomass in landfills.

This is Palestine's first waste-to-energy project, and it will help address environmental problems caused by landfills. According to the Palestinian Energy and Natural Resources Authority (PENRA), if the project proves worthwhile, it will be applied to all Palestinian landfills. PENRA said the government chose Zahrat Al Finjan for the study because it's the largest landfill in the West Bank.

Mohammed al-Saadi, technical director of the Joint Service Council for Solid Waste Management in Jenin, told Al-Monitor that the Zahrat Al Finjan landfill is the first Palestinian sanitary landfill to be designed in accordance with international standards. It started operating in 2007 and was expected to serve the two provinces of Jenin and Tubas until 2042 with a daily capacity of 300 tons. However, he added, given the shortage of landfills, the Zahrat Al Finjan landfill has been receiving waste from the entire northern West Bank and takes in about 1,000 tons of waste per day, which means that its lifespan has been reduced to around 12 years instead of 35.

Of a 240-dunum (59-acre) area, 120 dunams are used for the landfill. The other 120 remain available for recycling or power generation, Saadi said.

He pointed out that the memorandum comes in accordance with the government’s April decision to study the landfill. The study concluded that leachate from stockpiled waste needs to be treated and reused in agricultural irrigation. Also, the study cited a need to dispose of non-decomposed waste by means such as recycling or incineration, depending on the best social, financial and environmental choice.

The government is examining the study's results to determine the method to be used.

Asked how energy will be produced, Saadi said gas will be automatically and continuously produced through waste decomposition. He added that it's normal to make use of such gas in energy production, and that the produced energy can be accurately quantified at the landfill.

He pointed out that in cooperation with authorities, PIF subsidiary Massader will carry out the necessary studies and plans to extract biogas from waste and its collection and distribution to the Palestinian Electricity Transmission Ltd., which is the only party allowed to buy and transmit electricity to the Palestinian market.

Saadi explained that waste will be inserted into plastic containers to prevent any materials or gases from leaking into groundwater.

The project, he added, will provide another source of local energy to be added to locally produced solar power. It's also expected to open up new energy horizons in Palestine, generate profit, create job opportunities and reduce environmental risks.

Although the West Bank currently requires 1,400 megawatts (MW) of energy, Saadi said, "According to preliminary studies, the project will produce around 15 MW,” and this is a stepping-stone for Palestinians. He said obstacles facing Palestine's waste sector lie in collection, transportation, funding and disposal methods.

According to data released in May from the Palestinian Central Bureau of Statistics, in 2015 each household in the West Bank produced an average of 3.2 kilograms (7 pounds) of waste per day.

PENRA director Ayman Ismail told Al-Monitor the project is a step toward transitioning to alternative energy. The strategy consists of exploiting biogas and all other renewable energy sources, while increasing investment in renewable energy in Palestine.

The northern West Bank provinces rely on about 900 MW supplied from the Israeli Electricity Corp., which shows the need to resort to other energy to achieve economic and energy independence for Palestine.

This project, he continued, aims to generate local energy at reasonable prices. According to the strategy, about 130 MW of renewable energy must be produced by 2020.

“There are 25 MW of solar energy currently produced, and there are other solar energy projects that are underway,” he said.

He pointed out that the major challenge facing energy production in Palestine is that Israel prevents investment in Area C, which makes up about 60% of the West Bank. There are also difficulties obtaining some materials related to producing renewable energy, especially wind energy.

Ahmed Helles, director of the environmental awareness department at the Environmental Quality Authority, told Al-Monitor that with good planning it is economically feasible to invest in waste-to-energy projects. He noted that 65% of Palestinian waste is organic.

“Landfills are full of huge amounts of gas that have been piling up over the years. These projects require a well-thought-out study that includes ways to collect the produced gas and prevent any leakage," Helles said.

“We have millions of tons of waste, and we must find solutions that are economically and environmentally viable. The megawatts we can produce can help reduce our dependence on Israel,” he added.